Growing up on his family's Morgan horse farm, it was of little surprise that Nick Rennekamp would center his life's work around horses. What was less obvious at the time was that his specialty would focus on Thoroughbreds, starting them under saddle, conditioning them as racehorses and training them for polo.

The world of polo is drastically different from that of racing. From the way the horses are selected to how they are managed and trained, it's a different approach to conditioning a high -performance equine athlete.

Now 66-years-old, Rennekamp still keeps a foothold in both worlds. His La Grange, Ky-based farm is known in the polo world for producing well-started, good-minded prospects with a propensity for the game. Having just recently retired from training at the track, he still has connections that he developed over the past four decades in the racing industry, giving him easy-access to horses coming off of the track who are well-suited to the sport.

This dual-market network has resulted in Rennekamp becoming one of the go-to sources of polo ponies for both professionals and amateurs around the country.

“In my life I've probably helped thousands of horses go from the track to the world of polo, but truth be told, I probably profess to be a better trainer than I am,” said he with a chuckle. “I've learned that if you pick the right prospects – ones that have the right mind and physical build to be successful in polo – it can make you look like a pretty good horse trainer.”

While he may be humble about his abilities, Rennekamp has the resume to back up his reputation. At just 17 years of age, he got his start with Thoroughbreds, working in Ocala, Fla., for the late Tom Laverly, who trained juveniles and also played polo.

“He was a truly great guy. We broke 50, 60, 70 yearlings every year, and he was one of the first to really bring the show horse mentality to the 2-year-old business,” said Rennekamp. “I'd work for Tom in the winter and play polo in the summers. It was just a great way to get a start in the business.”

“Working for pros like that was such an opportunity to learn and play, but even more important to my career was Tommy's father, Bill Wayman. He had a lot to do with making Tommy into a 10-goal player and to this day is someone I consider to be one of the best mentors I've ever known,” he said.

After marrying his wife, Carter Reinhart, whose family is steeped in the world of polo as well, the pair decided to pool their talents and get back into racing as a way to not only support their polo habit but also to allow Rennekamp to work smarter rather than harder.

“We figured racing would be easier on my body, not having to ride as much. The plan was for the racing business to carry the polo business, but some years the opposite happened, and our polo business carried the racing stable,” he said.

At the height of his career, Rennekamp was purchasing and reselling more than 100 polo prospects annually. Some would be offered for sale at his annual polo pony auction, which he held for the better part of 10 years in conjunction with the U. S. Open Polo Championship, while others would have more miles put on them in training or matches prior to their sale. The majority of the horses came from lower level tracks in West Virginia and Ohio.

While polo is a physically-intensive sport, Rennekamp says the first thing he looks for in a polo prospect is disposition.

“I look for fillies that are really sweet. I like those kind fillies with a big, doughy eye. Of course, I want them to be well-built – strong back, square hind leg, but I can put up with imperfections, like toeing in or out or other little things,” said Rennekamp. He often takes breeding into account although it's typically not a “make or break” but insight instead.
“That hind leg is the most important thing, physically. It really should be straight from the angle to the hock to the point of their rump. If their leg is way out behind them like a German Shepherd, they might be able to run longer distances – sometimes very well, in fact – but they can't start off quickly with a burst of speed like they need to do on the polo field.”

Once he gets a prospect from the track, the first thing he asks of them is to simply enjoy being a horse. They start off turned out in a round pen, then in a small paddock with a buddy. Eventually he incorporates them into a herd and for a few weeks lets them relax and re-socialize in as low-stress of an environment as possible.

“Once they've had a few weeks to re-acclimate themselves, I start them back under saddle in a round pen or in the shed row of my barn and my goal is not to do anything like they're used to at the track,” he said. “At the track they're always trying to put them in the bridle. The faster they go, the more they pull and the more they pull, the faster they go, so I start completely differently. I throw their head away and if they try to build up some steam, I let them stop themselves at the end of the barn or side of the round pen. When I pick up the reins, I don't want them to get back into that racetrack mode.”

Eventually Rennekamp takes them out in the open, riding them in fields, on trails and around the farm. Often, he'll have them stop so he can get off and clean up a fence line, open a gate or pick something up, then get back on and keep going. While many of them can get nervous during the initial few rides, once they understand what is and is not being asked of them, they ease into the routine.

“I might only ride them once or twice a week, but I'll stay on for a while. Most of the foundational work is done at the walk, not tugging on them, but just relaxed, teaching them what I'm asking with my hands or legs and rewarding them when they do what I want,” he said. “I think repetition as a training tool is so overused. Horses are like kids.

“Once you teach them two plus two equals four, they know it. Repetition, like rollbacks, rollbacks, rollbacks and turning, turning, turning can make them sour. I ask them to do something simple, like giving to the bit or moving off of my leg, and reward them by releasing the pressure and giving them a rub on the neck. Simple rewards are easy for a horse to understand. A horse will walk through fire for you if you teach them in a way they understand and reward them properly for what you're asking.”

Jen Roytz is a marketing, publicity and comprehensive communications specialist based in Lexington, Kentucky and is the Executive Director of the Retired Racehorse Project. A native of Cleveland, Ohio, her professional focus lies in the fields of equine, health care, corporate and non-profit marketing. She is the go-to food source for one dog, two cats and three off-track Thoroughbreds. 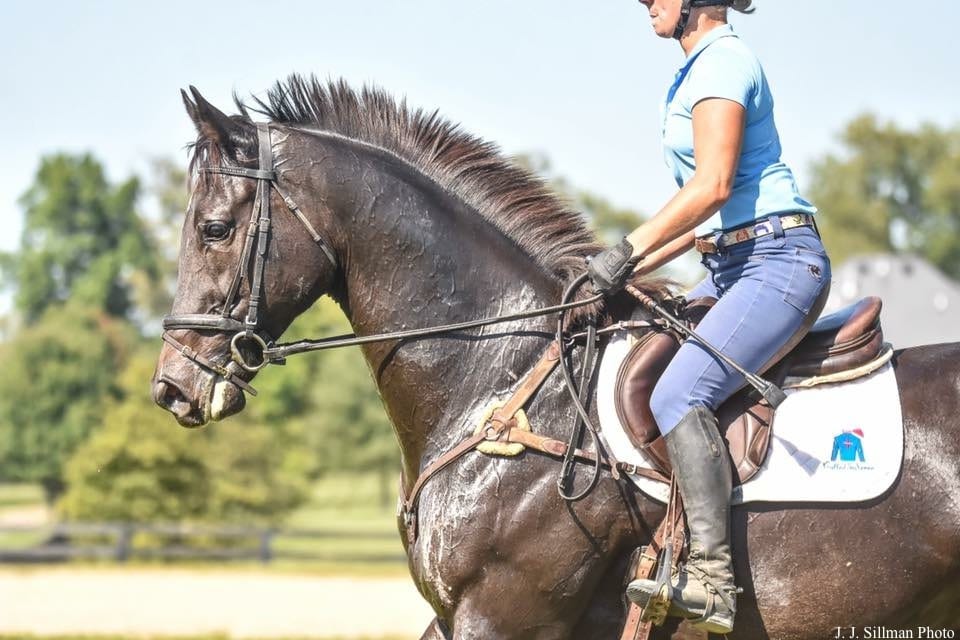 Cosequin Presents Aftercare Spotlight: A ‘Lightbulb Moment’ In The Quest To Teach A Horse To Accept Contact