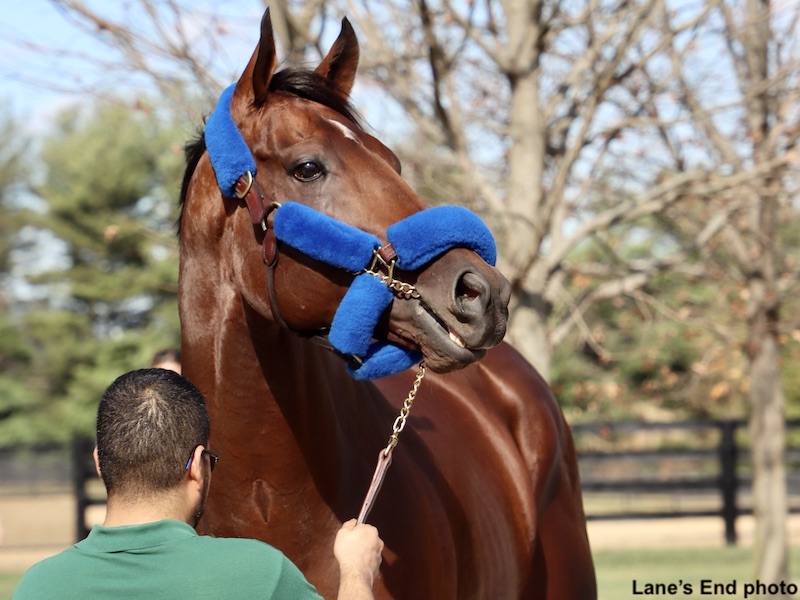 The catlike power and bounding glory of Flightline graced our racetracks for the last time on Nov. 5, and one of the marks of highest merit for the bay son of Tapit (by Pulpit) is that he translated the exceptional speed and overpowering dominance he had shown while racing in California to tracks in New York (for the Grade 1 Metropolitan Handicap) and Kentucky (for his career finale in the G1 Breeders' Cup Classic).

Now being carefully unwound from the bustle and daily routine of life on the racetrack, Flightline is being prepared step by step for his second career as a stallion at Lane's End Farm outside Versailles, Ky. On the racetrack, a show of particular interest in fillies can earn a colt a sharp correction. This is so because a horse's purpose on the racetrack is racing, and focus is important. Very important.

Back at the farm, it sometimes takes a moment for a smart colt to realize that a particular interest in fillies will no longer result in a correction. Instead, fillies are the focus of this new life that only a very few colts can attain.

Flightline has made the initial steps of transition to the quiet life of a breeding farm under the guidance of the stallion staff at Lane's End. Fresh from the accolades he earned after a rousing race in the Breeders' Cup Classic against his divisional challenger, Life is Good (Into Mischief), Flightline would be one of the most popular horses in the country. Tens of thousands would like to see him; many fewer would like to acquire a season and breed a foal from his first crop. Okay, actually nearly everyone would like a season. The reality is that only a very few have the cash ($200,000 for a live foal) and a mare of the quality to possibly reach that pinnacle.

So, one of the highlights of the latter days of the Keeneland November sale was the opportunity to venture out to Lane's End and see Flightline being shown to some of his fans and admirers on the grounds trod for decades by champion racehorse and sire A.P. Indy.

A thick-bodied son of Triple Crown winner Seattle Slew (Bold Reasoning) and the Secretariat mare Weekend Surprise, A.P. Indy was a leader in every segment of his life. A beautiful young horse, he was the top-selling lot at the 1990 Keeneland July sale of selected yearlings. On the racetrack under the patient training of Neil Drysdale, the colt became a Grade 1 winner at two, then progressed to win the Belmont Stakes at three, ended his racing career with victory in the Breeders' Cup Classic, and was named Horse of the Year in 1992.

Thirty years late, there is no question who will be Horse of the Year for 2022. That question was answered emphatically and properly (on the racetrack) when the two best horses in training – Life is Good and Flightline – squared off over the 10 furlongs of the Breeders' Cup Classic.

On Monday afternoon, watching Flightline walk the manicured pathways that A.P. Indy, Kingmambo, and others built, there was no doubt that, on racing ability and athletic prowess, here was a young horse who merited inclusion among these champions of sporting history.

Across the quad from the primary showing path where our new champion strode and stood and pricked his handsome ears, a statue of A.P. Indy on a pedestal surveys the domain the great horse ruled.

The son and grandson of Triple Crown winners became the most dominant influence on the American classics of the past 20 years, and Flightline is a son of A.P. Indy's most famous and important grandson, Tapit.

Whereas A.P. Indy himself was a Goliath, thick-bodied and immensely powerful, Pulpit and his great son Tapit are just a step closer to the norm, nice-sized horses but not immense.

Flightline himself is a lean and elegant racer of considerable individuality. In phenotype, Flightline is definitely more of a greyhound than a mastiff, and the influence of the great Mr. Prospector is evident in the elegant and efficient construction of the horse. Mr. Prospector was no carbon copy of his sire Raise a Native, either, but took a different type, and Flightline is inbred to Mr. P 4x5x5. That might be a point worth considering.

Judicious consideration is always a good ingredient in well-planned matings, but if the brilliant bay champion to be is able to pass on a reasonable portion of the qualities he showed on the racetrack, his future will be bright, and the sport will be all the richer.