The dramatic maiden special winner Damon's Mound (by Girvin) came out of Kentucky with a big reputation, almost as big as that for Gulfport (Uncle Mo), who had won a fancy-looking maiden and then followed with a powerful victory by 12 ¼ lengths in the listed Bashford Manor Stakes at Churchill Downs.

In the Grade 2 Saratoga Special on Saturday, Aug. 13, Gulfport was the favorite at 45 cents to a dollar, with Damon's Mound a good second choice. At the finish of the race, Damon's Mound won by 3 1/4 lengths, and there was no doubt that they were the two best colts in the race, as Gulfport finished seven lengths clear of third-place Super Chow (Lord Nelson). The relative merits of the first two will be disputed, however, because the deviant son of Lord Nelson swerved out in front of Gulfport, causing that colt to check sharply and lose momentum.

The winner of the Special is a son of freshman sire Girvin, who now ranks fifth on the list of leading first-crop sires, with earnings of slightly more than a half-million to date. The stallion had the first stakes winner among the freshmen sires of 2022 and now has seven winners and two stakes winners from 17 starters from his first crop of 72 foals.

Girvin's leading racer is named for a place in Texas. Damon's Mound is a geological feature in Brazoria County, south of Houston. The mound is a limestone formation that rises 146 feet above the surrounding land and covers 3,000 acres. The mound is a source of limestone and site of mineral springs, according to the state historical society.

Damon's Mound the horse was bred in Florida and is out of the Stroll mare San Antonio Stroll. The Saratoga Special winner is the first foal and stakes winner for the dam and is in fact the first stakes winner for generations in the direct female line.

San Antonio Stroll was the first step in rehabilitating the family's fortunes, as the daughter of Stroll (Pulpit) won three of 14 starts, with a second in the La Senorita at two and a third in the Fiesta Mile at four, both at Retama Park, with earnings of $75,001.

No matter how plebeian a family seems to be, going back far enough will turn up a fine specimen of the breed, and the ninth dam of the Saratoga Special winner is no less than Carrozza, a daughter of Derby winner Dante (Nearco) who won the 1957 Oaks for owner-breeder Queen Elizabeth II.

Carrozza was out of the Hyperion mare Calash, a full sister to Sun Chariot, who won the 1,000 Guineas, as well as the war-time replacements of the Oaks and St. Leger that were run at Newmarket in 1942. Calash and Sun Chariot were out of Clarence, one of only three foals from the very quick juvenile stakes winner Nun's Veil (Friar Marcus). Although she died at age six, Nun's Veil overcame the long odds of continuing a female line and is the 12th dam of Damon's Mound. In addition, Nun's Veil is a half-sister to the great sire Blandford (Swynford), and their dam Blanche (White Eagle) is the 13th dam of the Saratoga Special winner. This is the Black Cherry family that has produced such important racers around the world.

In its more distant generations, this was clearly a thoroughly distinguished family, with classic winners along with quality performers in juvenile competition and high-class older horses.

To upgrade the more recent stock, the addition of Pulpit's high-class son Stroll, winner of the G1 Turf Classic at Churchill Downs, and G1 Haskell Stakes winner Girvin to this female line has infused qualities that brought this line back into top-class competition. 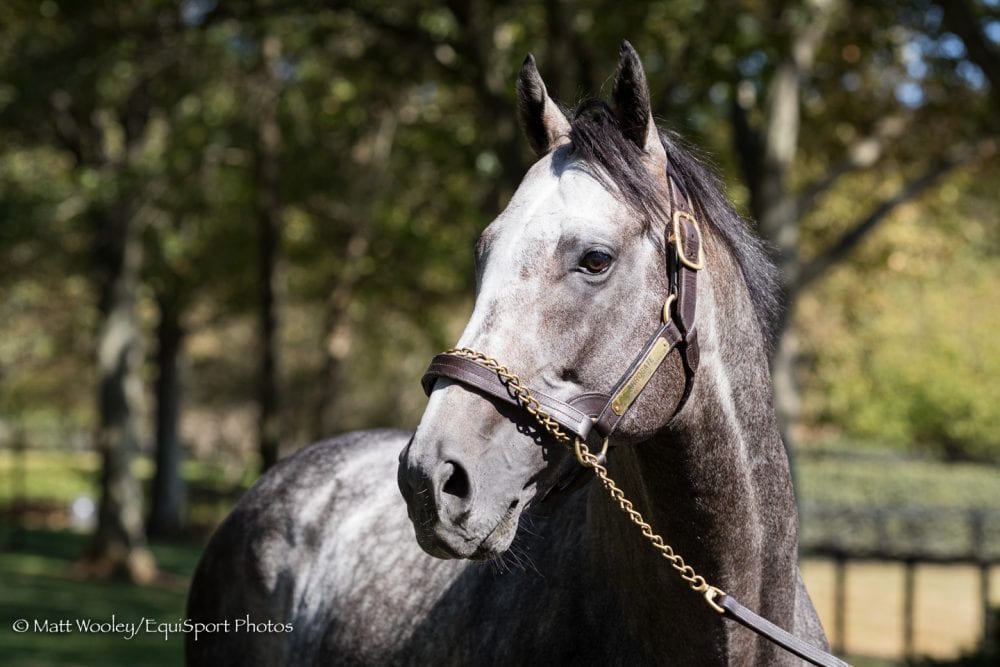