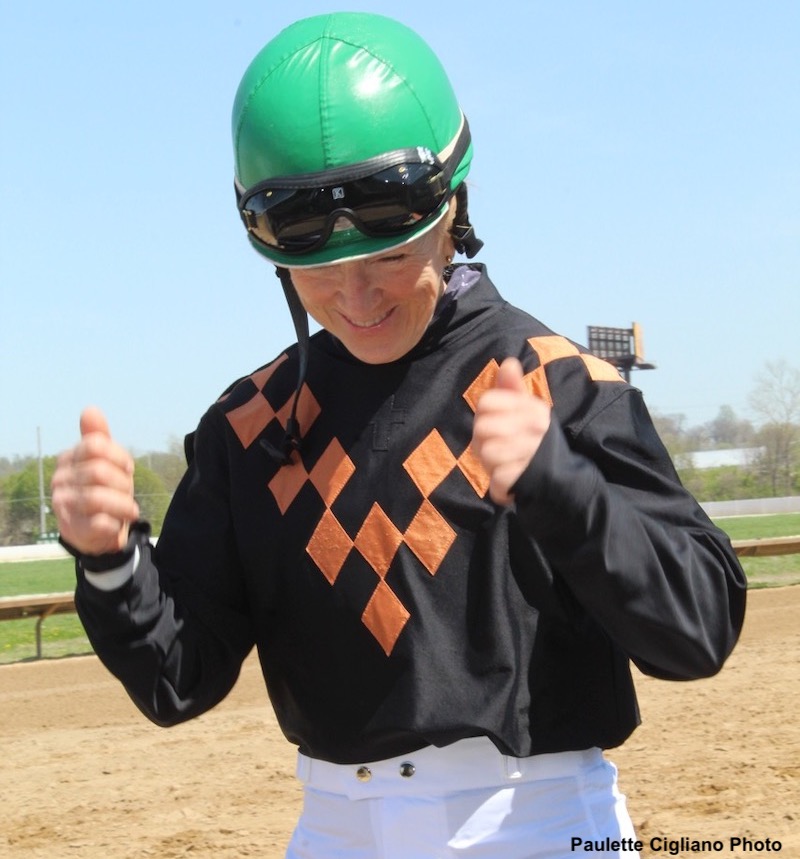 Sampson on opening day at the 2022 Fairmount meet

Here's something you don't often hear coming from a jockey's lips:

“I can't push it too hard because if I ride too many, they're going to take away my Social Security.”

Then again, Kim Sampson isn't the kind of jockey you come across every day. She hopes to soon be recognized as a Guinness World Record holder.

In April of this year, Sampson returned to the winner's circle for the first time in 38 years. According to the online Guinness Book of World Records, the longest period of time between jockey wins previously was 12 years and 260 days. Sampson rode her last victory in October 1983 at Fairmount Park and hung up her tack the following year. She'd grown tired of struggling to make weight, and while she was growing burned out on racing, Sampson said she never totally ruled out the idea of getting into the starting gate again.

Sampson came to horses through her family. One of nine children, Sampson had a Quarter Horse she rode alongside a racehorse her father bred from the family of Man o' War. Sampson and her brother would often be tasked with colt breaking their father's training stock. Both of them wanted to learn to gallop, and Sampson said her brother would often get the first shot. Sampson would watch what he did wrong, take mental notes, and swing aboard for the next workout, shining by comparison.

“I'd see where he got thrown off and say, I know what to do now,” she said.

Her skills with difficult horses caught the eye of Jerry Lee Sampson, who was training horses at the same facility. Jerry hired Kim to gallop for him in the mornings before school, and when Kim turned 18, the two were married. Kim said it was her husband who convinced her to begin riding races after he grew frustrated with a few rides given to his horses by professional jockeys.

The life of a jockey was different in the early 1980s, Sampson said. Even at Fairmount, fields were often full with AEs ready to draw in if a horse scratched. The jockey colony could be 30 or 40 riders, and riding through traffic was an everyday occurrence.

“It wasn't like racing today,” she said. “It was always a ten-horse field, so it was nothing like riding today. If it was riding like back then, I'd say the heck with it. You were in tight on a regular basis, but you kept control of your horse.”

Sampson said she was among the first female jockeys to succeed at Fairmount, and did so despite not being given the same quality of horses as her male competitors. She kept her own book and wasn't afraid to stick up for herself. She didn't know it at the time, but she said Jerry, who remained an active owner/breeder/trainer, was sticking up for her too.

“There was times I felt like I was boxed in,” she said. “But they were fearful of my husband. He threatened one of them one time, and I didn't even know he did it. I think it was one of the other people in the grandstand who'd bet on me and said something to him [about rough riding].

“I feel like in a sense, they respected me. It was just the trainers, they weren't giving me a shot back then.”

Weights were also lower in those days, which was a struggle for Sampson even before she took time away to give birth. When she walked away in 1984, she was relieved to stop dieting.

She took a small string of her husband's horses to Chicago and found some success in the late 1980s, but she and Jerry had gotten frustrated with the expense involved in breeding and racing and sold their horses.

When Sampson left the track, she took jobs at a bottling plant, ran the couple's Bonanza Campground, and eventually settled into Jerry's profession of iron working. It was hard work; Sampson's job usually involved working on bridge decks and metal buildings, assembling steel pieces on the ground and sending them up into the air for a crew to apply to a structure. Then, Sampson would come along and finish bolting them together. She spent 28 years in the profession until she broke her hand on a trail ride in 2019.

True to the gritty attitude of professional horsewomen, Sampson saw the injury as an opportunity.

“I could tape my fingers together and still gallop,” she said. “So I did that and I'd just get on a few a day, just for [Eddie Essenpreis]. I just kept doing it through the winter. This winter here, the other guy never showed up, so I just kept doing it.”

Sampson had worked for Essenpreis early in her career and felt she could trust him to put her on horses who would help her regain her fitness. She soon began working horses for Dennis Higgins, also, and now gets on at least 15 each morning.

When her hand healed and she was cleared to return to work, Sampson gave it some thought. She was approaching 60 and thought it was time to retire from iron work … but not from racehorses.

Higgins and others on the backstretch talked her into race riding again at the age of 63.

“They bought my helmet and stuff,” she said. “My stuff was dry rotted!”

Sampson made her first start back on April 19 and picked up her first win on April 30 with Higgins' Lonesome Dream. She teamed up with the gelding again in June for an allowance win. Sampson said it's easy to look at Lonesome Dream in the paddock and doubt he's got the goods (perhaps not dissimilarly to the mistake an observer may make about her skills due to her age), but it's all about attitude.

“He's a pretty cool horse,” she said. “He's laidback. When they have him in the paddock, one rider was laughing at him saying, I hope he runs faster than that. You take him to the racetrack, he just wants to stand there for a minute. I just kind of let him have his way and we click pretty good.”

Much like Lonesome Dream, Sampson has the guts for the job but is in no hurry for the next step. She said fellow riders were a little suspicious of her appearance in the jocks' room, fearing she was aiming to take food off their tables. As someone who's retired, she said, she isn't interested in riding races in such volume as to create a threat to them.

“I wish I could say I'd go for my 100 wins, because I've won 83 now, but I'd lose my Social Security if I did that,” she said. “The meet here ends in September and I'll probably finish out this. I won't be back next year. Come this fall, I'll be back trail riding.” 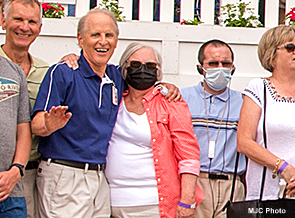 Breeders’ Cup Presents Connections: ‘Nothing Like A Horse That Really Inspires You’