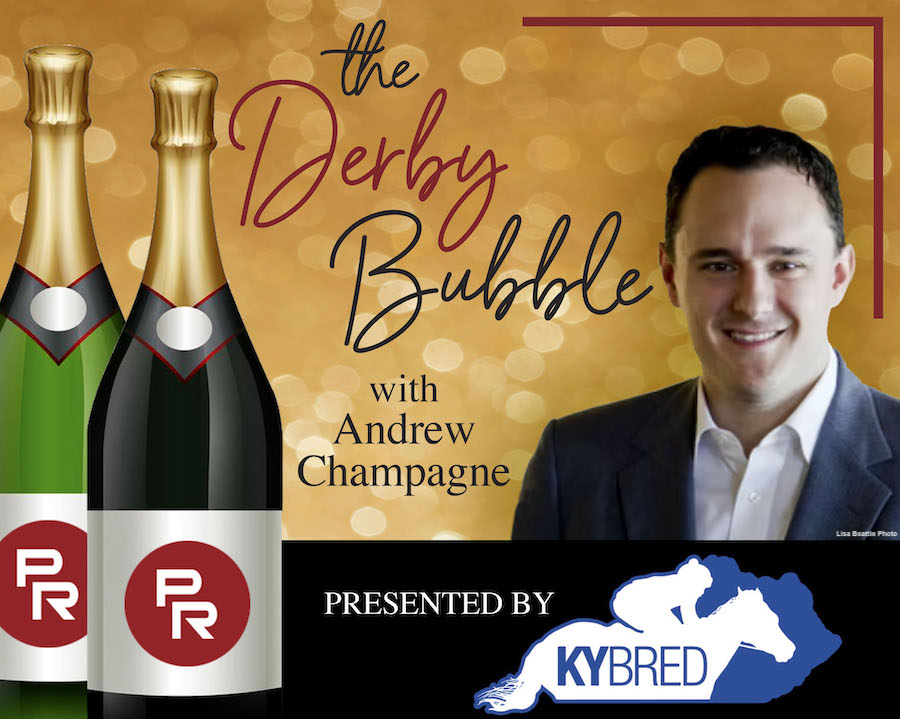 The first Saturday in May is just around the corner, which means it's time for detailed looks at the horses that could fill the Kentucky Derby starting gate (or the Kentucky Oaks this week) with Andrew Champagne of Catena Media and The Saratogian's Pink Sheet.

Check the Paulick Report every week for updated rankings that include news, notes, and opinions on the 3-year-olds that figure to take center stage.

We're doing things a bit different this week. Instead of another Kentucky Derby list, we'll take a week off and come back to the boys once the field is set.

This week's rankings focus on the fillies. We're just a week away from the 2022 Kentucky Oaks, and this year's field is an intriguing one with several potential stars.

Here's one handicapper's look at the top 14 on the leaderboard!

Kentucky-bred contenders will be highlighted in red, and will receive additional analysis into their breeders, broodmares, and auction histories. Pedigree notes are written by Joe Nevills.

It wasn't pretty, but Echo Zulu won the Grade 2 Fair Grounds Oaks in her 3-year-old debut. It screamed that she needed the race, and a step forward second off the bench, in the race that's been the goal all along, seems likely. To be the champ, you've got to beat the champ. No filly has, so I can't knock her off the pedestal just yet.

Echo Zulu was bred in Kentucky by the partnership of Betz/J. Betz/Burns/CHNNHK/Magers/CoCo Equine/Ramsby, out of the Grade 2-winning Menifee mare Letgomyecho. The dam's other foals of note include Grade 1 winner Echo Town (by Speightstown), Grade 3 winner J Boys Echo (by Mineshaft), and Grade 3-placed Unbridled Outlaw (by Unbridled's Song). Echo Zulu sold for $300,000 at the 2020 Keeneland September Yearling Sale.

There's, quite literally, nothing to knock about Kathleen O. to this point. She's four-for-four and has been much the best in back-to-back graded stakes scores at Gulfstream Park. It's possible the Oaks sets up for her late-running style, and when Shug McGaughey gets horses in good form, they tend to stay in good form.

Kathleen O. was bred in Kentucky by Gainesway Thoroughbreds Ltd. and Bridlewood Farm, out of the stakes-placed Blame mare Quaver. The partnership purchased Quaver with Kathleen O. in-utero for $90,000 at the 2019 Keeneland January Horses of All Ages Sale, with the aim of supporting Tapwrit's first book of mares, and they sold the mare to Lev Miller for $140,000 at the 2021 Keeneland November Breeding Stock Sale. Kathleen O. brought $8,000 as a weanling at the 2019 Keeneland November Sale, then she sold for $50,000 as a yearling at the 2020 OBS October Sale, and $275,000 at the 2021 OBS Spring 2-Year-Olds in Training Sale.

Secret Oath was impressive enough in back-to-back romps at Oaklawn that her connections tried the boys in the G1 Arkansas Derby. She was far from disgraced when third that day despite a rough trip, and new rider Luis Saez will have the mount on the first Friday in May. Her Hall of Fame trainer has won this race four times, but is seeking his first Oaks score since 1990.

Secret Oath was homebred in Kentucky by Briland Farm, Robert Mitchell, and Stacy Mitchell. She is out of the multiple Grade 1-placed stakes winner Absinthe Minded, who is also a homebred for the same connections.

A full-sister to G1 Santa Anita Handicap winner Idol, Nest always wanted to go two turns and has relished that route since stretching out. Her run of three wins in a row includes the G1 Ashland at Keeneland, which she won by more than eight lengths. The question is, what did she beat in that event? I think this race represents a significant jump in class, and I'll likely need more of a price than she'll be at post time to endorse her at the windows.

When Hidden Connection is good, she's very good. She romped in the G3 Pocahontas over the Churchill Downs oval last fall, and she ran Echo Zulu to a photo finish last time out. The question is, is she capable of a move forward in her third start of the campaign? In order to bridge the apparent gap between the top four fillies on this list and the rest of the field, she likely needs to fire a career-best shot to earn a check.

Goddess of Fire threw everything but the kitchen sink at Kathleen O. last time out in the G2 Gulfstream Park Oaks. Consider this: She was more than 17 lengths clear of the third-place finisher that day. She's the lesser-regarded of Todd Pletcher's two runners, but she's consistent and has shown she can go two turns.

Goddess of Fire is a Kentucky homebred for the Brunetti family's Red Oak Stable, out of stakes-winner Feel That Fire, who is herself a Red Oak homebred. Feel That Fire is also the dam of Grade 1 winner Mind Control (by Stay Thirsty).

Pedigree: Medaglia d'Oro – Been Here Before (by Tapit)

Toss out a failed turf try in the G3 Sweetest Chant, and Nostalgic's slate looks considerably better. She capitalized on a very strong ride by Jose Ortiz to win the G3 Gazelle and earn her spot in the Oaks field. She's bred to run all day long, has shown an ability to pass others late, and seems to be in career-best form ahead of her first try against Grade 1 foes.

Nostalgic was homebred in Kentucky by Godolphin, out of the stakes-placed Been Here Before, also a homebred for the operation of Sheikh Mohammed Bin Rashid Al Maktoum.

Desert Dawn punched her ticket to Kentucky with an upset win in the G2 Santa Anita Oaks. She's competed exclusively against graded stakes company since breaking her maiden last summer, but while she hasn't been embarrassed in most of those races, that effort came as a shock to most bettors.

Yuugiri wound up the main beneficiary of Secret Oath running in the Arkansas Derby. With that one going against the boys, she was able to take down the G3 Fantasy for her first win since September. She's never missed the board in five career starts, but to turn the tables on Secret Oath, she'll need to make up more than nine lengths from her two-back effort in the G3 Honeybee.

Yuugiri was homebred in Kentucky by Tsunebumi and Sekie Yoshihara, out of the stakes winner Yuzuru, who also raced for the Yoshiharas.

It's a big week for McPeek, who will also saddle a pair of Kentucky Derby entrants (Smile Happy and Tiz the Bomb) on Saturday. Cocktail Moments won her career debut over this surface and has faced nothing but stakes company ever since, but she's a longshot in here. She was a distant third behind Kathleen O. in the G2 Davona Dale and a well-beaten second behind Nest in the Ashland.

Pedigree: Munnings – Private Feeling (by Belong to Me)

Shahama is a total unknown. She's four-for-four, but her races have all come in Dubai, and that route has yet to produce anything close to an Oaks winner. She'll likely be a pretty big price, but her former trainer prior to moving to the Pletcher barn is a pretty cool story. Fawzi Nass is based in Bahrain, and trains Arabians along with Thoroughbreds. His barn includes RB Rich Lyke Me, a former U.S. champion who won the Group 1 Al Maktoum Challenge at Meydan this past January.

Shahama was bred in Kentucky by SF Bloodstock, out of the winning Belong to Me mare Private Feeling, whose other foals include the dual champion and successful sire Lookin at Lucky (by Smart Strike), as well as the multiple Grade 2 winner Kensei (by Mr. Greeley). SF Bloodstock acquired Private Feeling for $40,000, carrying Shahama, at the 2018 Keeneland November Sale. Shahama sold for $425,000 as a juvenile at the 2021 OBS Spring Sale.

This New York-bred will make her first start outside the Big Apple on the first Friday in May. After topping restricted company in two starts at Belmont, she went to Aqueduct, where she won the Busher Stakes and ran second in a pair of graded events. Nostalgic ran her down in the Gazelle, and it's worth noting that she's 3-for-3 around one turn and 0-for-2 in two-turn events.

I'm still struggling to figure out where her effort in the G2 Rachel Alexandra came from. The biggest win of her career came off a three-month break and after a surface switch from turf to dirt. That race, though, didn't come back fast on figures, and she was a distant eighth in the Fair Grounds Oaks behind Echo Zulu and Hidden Connection.

Turnerloose was bred in Kentucky by William Humphries and Altair Farms, out of the unraced Goaltending, who was an $80,000 purchase, in foal to Street Sense, out of the 2017 Keeneland November Sale. Turnerloose sold for $50,000 at the 2020 Keeneland September Sale.

This is a pretty cool story, as Candy Raid ran for a tag four times as a 2-year-old and is now running in one of the biggest races on the calendar. She got here with a 52-1 upset in the Bourbonette Oaks over Turfway Park's synthetic surface. She ran a huge race that day, to be sure, but she's shown very little on dirt compared to the rest of the field. Her lone try to date against graded company was an eighth-place effort in the Rachel Alexandra.

Candy Raid was bred in Kentucky by Stonestreet Thoroughbred Holdings, out of the Grade 2-placed stakes winner Lady Samuri, whose foals include the recent G2 Oaklawn Handicap winner Last Samurai (by Malibu Moon). Stonestreet bought the dam, in foal to Union Rags, for $280,000 at the 2014 Keeneland November Sale, and Candy Raid sold for $35,000 at the 2020 Keeneland November Sale.

The Derby Bubble Presented By Kentucky-Breds: Hurry Up And Wait After Final Prep