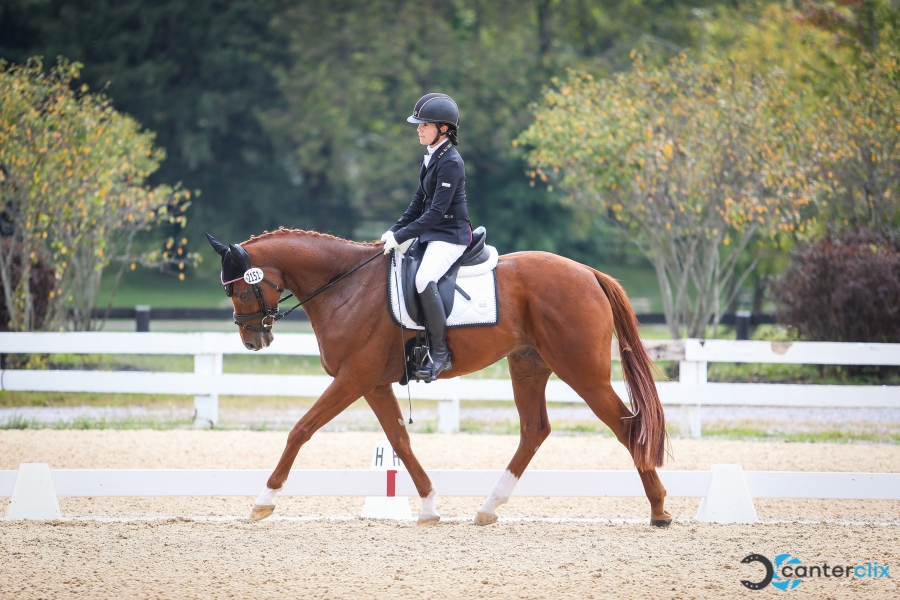 Alison O'Dwyer and Kubo Cat offer great lessons about the extreme nature of Thoroughbreds and the challenges and benefits that go along with riding this roller coaster of equine experiences.

O'Dwyer won the 2021 Retired Racehorse Project Thoroughbred Makeover in dressage. She also won the dressage discipline in 2019 and 2017, the previous two years that she entered.

Kubo Cat, Alison's dressage champion in 2021, is a 2016 chestnut Thoroughbred gelding bred in Louisiana who raced 16 times in his home state from Aug. 2018 to Dec. 2019. He never won, but he was second five times and third four times.

The five-minute freestyle test that Kubo and Alison did during the Thoroughbred Makeover Finale included a mix of higher-level movements like counter canters that showed off the horse's upper-level potential and foundational movements like simple lead changes fitting for a horse with less than a year of full-time dressage training. Present during the entire test was a calm, steady demeanor in the nerve-wracking competition setting inside the high-stimulation TCA Covered Arena.

Because Kubo Cat was for sale, Alison's phone started, well, I want to say “ringing off the hook,” but I realize we all use cell phones now. You get the idea. The market for OTTBs has grown exponentially because horses like Kubo Cat are tremendous ambassadors for the talent and versatility inherent in the Thoroughbred breed. My last two “Horowitz on OTTBs” columns have explored the nature side of Thoroughbred genetics and nurture side of the breed's development through a first career in racing.

Alison's experiences with Kubo Cat showcase a side of the breed that often gets lost when witnessing the breathtaking mix of beauty and athleticism of a Thoroughbred like him or the other horses that excel at the Thoroughbred Makeover.

For those that love Thoroughbreds, the extremes are worth it. Anybody that gets a Thoroughbred should be prepared for that.

“It's a tough conversation to have with people,” O'Dwyer said. “My horse looked so quiet in that indoor. The flood of phone calls was all amateurs, and yes, he's an incredibly different creature than he used to be, but he had a legitimate behavioral problem when he came to our farm that it actually intimidated me.”

Of course, no one, O'Dwyer included, gets a Thoroughbred hoping to be challenged or intimidated that way. It usually starts as love at first sight.

“When I saw one picture of this horse, my gut just said that's a really nice horse,” O'Dwyer said.

We're in the midst of an online-dating-world of buying horses. People have more opportunities to find OTTBs today than ever before through social media and listing organizations like CANTER. Much like online dating, it's possible to fall in love with a horse from a picture and fantasize about what the future holds.

The people that reached out to Alison did that with Kubo Cat, but Alison knew better.

“He came to me very sour—like very, very sour,” Alison said. “I would get on his back, and I could maybe get him to trot one circle a certain direction, and as soon as I would go to change directions, he would just slam on the brakes and come to a complete halt with ears pinned. Then, he would start backing up and gave me that feeling that if I gave him a heavy correction, he was going to go up.”

Remember, this is coming from someone who retrains horses off the racetrack for new careers as sporthorses about as well as anyone.

“My first horse I ever had was a Thoroughbred mare that tortured me when I was a kid,” Alison said.

She laughed saying the word “tortured,” in appreciation of the totality of experiences, positive and negative, that a Thoroughbred can offer.

“I'm not sure I knew any better,” Alison said. “I think she bit me the first day I got her. She was way too hot for what a kid should probably have. It's not something I'd recommend for everybody, but in the end, I had such a wonderful partnership with her because I had to take it really slow and go back to basics.”

Alison described a “safety net” of rules and working with more-experienced riders that made the partnership work. She and Something Special IV competed up to eventing's Training level of 3-foot-3 in 2003 when the mare was 21 and Alison was 15.

Then, her next horse, Rhythmic Drum, was also a Thoroughbred, a Montana-bred bay gelding who raced 21 times at tracks like Great Falls, Metrapark, and Playfair, won four times, and was in the top-three 11 times. Alison and Rhythmic Drum competed up to the FEI 1-star level.

With Kubo Cat, Alison asked her husband, the racehorse trainer Jerry O'Dwyer, to step in, calling him her “crash dummy, if I don't really know anything about the horse.”

Alison: “When Jerry came and got on him, he just sat on him at first and didn't do anything. I'm expecting fireworks, but he just sat there and took it slow and rewarded him any time he would go forward.”

Jerry: “I used to ride very loose on him, let him adapt that he's not going to be grabbed up and be asked to go fast anymore. It was just a case of letting him go forward and enjoying his life. They're very smart, the Thoroughbreds. They're like us, and sometimes they get a little sour to the same things. If you can freshen up their minds a little bit, they're going to work for you again.”

Alison: “I would go really slow and keep everything his [the horse's] idea.”

Jerry: “I think the dressage is great for the horses because it does make them turn left, turn right. They get to relax a little bit and put their head down. It is a great benefit.”

Alison: “He'll send a horse in the chute back behind the starting gate and have it just do flat work and figure eights and serpentines with the riders, and I know he sees a lot of value in that.”

The teamwork has paid off for the O'Dwyers.

“Alison is a very good rider, and she puts a helluva lot of work and time and effort into it,” Jerry said. “What people saw at the Makeover with that horse was hours upon hours of her working with him. She used to take him off the farm to have a look at other things, and the two of them just got on well after that. The proof is in the pudding.”

Making the pudding is hard work, and people that get Thoroughbreds should be prepared to meticulously follow a recipe. Alison uses this mentality with selling her Thoroughbreds that she's trained off the track as well.

“I say I'm going to talk you out of this horse first, and if you're still interested, then you can come ride him,” Alison said. “That was really hard to do, especially with Kubo Cat last year because he looked so quiet, which was great for me because he won, but the flood of phone calls was from inappropriate people. This is not a horse that I can just sell to Sally Sue's mom. He was just a professional's horse, and it was very hard to convince people of that.”

Alison sold Kubo Cat to Leah Lang-Gluscic, an upper-level eventer who has taken the OTTB AP Prime up to the highest level of eventing at the 5-star level at the Land Rover Kentucky Three-Day Event in 2021.

“She's got a real love for the breed,” Alison said. “That's where I wanted him to be. I really think he has the talent to be an upper-level horse, and he has the attitude of an upper-level horse. I don't think he's going to be happy just sitting around with someone that just wants to hug him and brush him because he'll bite you. That just worked out perfectly.”

Kubo Cat's first USEA recognized event with Lang-Gluscic was a first-place finish at the Beginner Novice level of 2-foot-7 at the Horse Trials at Majestic Oaks in Florida earlier this month. They finished on their dressage score of 30.6 and had double clear cross country and stadium jumping rounds.

As with any relationship, it's about finding the right match and then putting in the hard work to make the relationship flourish. It's easy to fall in love at first sight with a horse. It's wonderful for the horse racing industry that more people are now doing that with Thoroughbreds. With many great aftercare organizations and resellers, there are many attractive dating profiles out there. But, making a life together takes a lot of hard work. As a standard, wanting a Thoroughbred that's not sensitive would be like wanting ice cream that's not cold.

With their expertise in racing and dressage, the O'Dwyers are the ultimate marriage counselors for Thoroughbred-lovers.

Jerry: “It's about trust for the horse and you and for you and the horse. To gain that trust, you have to go along slowly at the start, especially if you have a quirky one. With a couple weeks in their new discipline, you can see the calmness in their eye and how they settle down and start really enjoying their new life.”

Alison: “If you just take your time and keep the faith, I think all these creatures can come around and be great athletes and be great minds to work with.”