Kirkpatrick & Co. Presents In Their Care: Martin A Key Part Of The Epicenter Team, Even From Another Horse's Saddle - Horse Racing News | Paulick Report
Skip to content

Epicenter works (inside) with Martin and Gun It to their outside

Eddie Martin, Jr. wondered aloud if there would be room for him in the winner's circle if favored Epicenter should win the Kentucky Derby. He could expect Steve Asmussen to make sure of that.

The Hall of Fame trainer credits Martin with playing an integral role in the development of the impressive Louisiana Derby winner.

“He's an excellent horseman with a valued opinion and a lot of ability,” Asmussen said of the 55-year-old exercise rider and former jockey. “On top of that, he's physically capable.”

Martin has made a huge contribution in a manner most fans would never realize. He does not gallop Epicenter every morning. Roberto Howell masterfully handles that. He does not work the Not This Time colt. Wilson Fabian is as good as they come there.

No. Martin, a winner of 4,084 races and more than $78 million in purses during his career as a jockey, does his part by flawlessly handling Gun It, Epicenter's constant workmate. The veteran rider and his hard-trying gray mount make certain that Epicenter is pushed – but not too hard – as part of Asmussen's bid to end a 0 for 23 Derby drought.

“You're talking to me because we have the favorite in the Derby and we're talking about Eddie Martin, who has worked him or against him for five months in a way or a manner that has improved this horse to come to a form to make him a favorite in the Derby,” Asmussen said. “It doesn't happen in a day. I believe it is that gradual and that important.”

Although Martin never officially retired, he has not competed since Sept. 12, 2021, when Little Lucerita trailed in eighth in an allowance optional claiming race at Kentucky Downs. The New Orleans native has worked for Asmussen the last two years. He was asked to help when the barn was short of help on Christmas Eve – and never left.

Martin demands much of himself. And Asmussen, North America's all-time leading trainer with more than 9,700 victories, expects much of him and every other employee.

“He wants it a certain way. It's a routine, a schedule, and it's got to be done a certain way,” Martin said. “If it ain't done that way, then you don't need to be there.”

The instructions for Epicenter's first two works at Churchill Downs, on April 10 and April 17, were straightforward and yet challenging to execute. Gun It was to stay a neck behind his stablemate for as long as possible. Ideally, Fabian was to complete five furlongs with Epicenter in l:0l.

Martin must keep Gun It's competitive instinct in check. If he should exert too much pressure or pass his workmate, the time might be too fast. If he does not apply enough heat, a sluggish clocking could result. Either could harm Epicenter's Derby bid.

Getting it right is so important that the tireless Asmussen has driven eight hours overnight, from Oaklawn Park to Churchill Downs, to scrutinize every stride of a work.

Handling Gun It, a 6-year-old son of Tapit and a three-time winner during his career, is no mean feat.

“He's one of the strongest horses in our barn. I think that's why he trusts me with him,” Martin said. “I'm not saying I'm strong, by no means. But I get along with the horse.

“I find a way by keeping my hands down and back on his withers and I've got no problem. I keep my hands very still until the time when I do want to move him and make him go faster and keep up with that beast.”

Martin and Fabian are as in synch as any two riders can be.

“They communicate well and they aid each other in getting the work started the way that you want,” Asmussen said. “With anything, if it doesn't start right, it isn't going to end right, no matter what we're referring to.”

How close did they come to hitting that five-furlong, 1:01 target those first two works beneath the twin spires? Epicenter stopped the clocker's watch in 1:01 at the end of the first work, 1:00.80 for the second drill.

Martin takes pride in saying he once rode in the Kentucky Derby, even if he and his mount, Itsallinthechase, did a bunch of chasing in finishing 16th. He takes at least as much pride in knowing he is helping to prepare Epicenter, a winner of four of six starts with more than $l million in earnings, as well as he can be prepared. He is every bit as exacting while he rides various workmates, colts and fillies, to push undefeated Kentucky Oaks favorite Echo Zulu.

“The guy don't pay me to make mistakes and I ain't making none,” he said. “It's been precise, dude. It's been perfect.”

Kirkpatrick & Co Presents In Their Care: Horses Teach Clapham ‘Something New Every Day’ 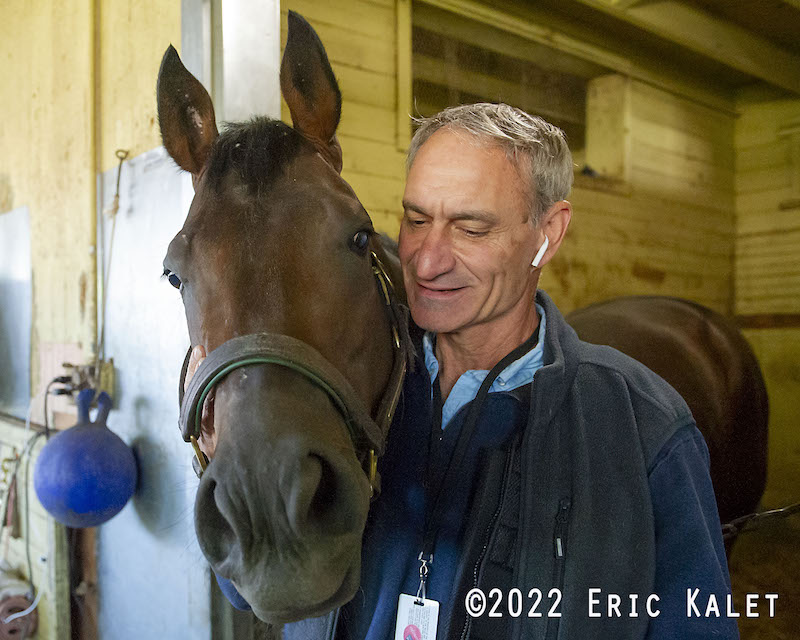 Kirkpatrick & Co. Presents In Their Care: Schosberg Always Answers The Call On Aftercare

Kirkpatrick & Co. Presents In Their Care: Lindsy Reed The ‘Right Hand’ Of Family Stable That Shocked The Derby