Kirkpatrick & Co Presents In Their Care: Paye Looking Forward To Passing Her Love Of Horses To The Next Generation - Horse Racing News | Paulick Report
Skip to content
Closex 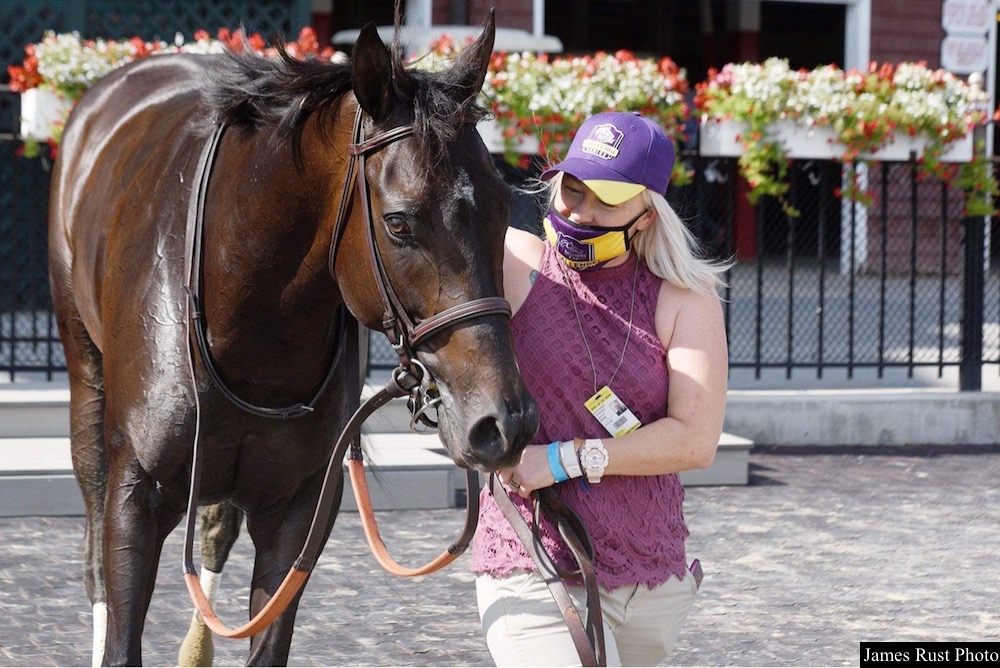 In younger days, Courtney Paye felt obligated only to her horses while she ventured from coast to coast as a groom. She sampled life in Arkansas, California, Florida, Louisiana, New York, Ohio, Pennsylvania, Texas and West Virginia while being employed by such prominent trainers as Richard Baltas, Christophe Clement, Dallas Keen, Peter Miller and, currently, Tom Amoss.

The native of Orange County, Calif., was living her own version of Disneyland, the carefree amusement park that lit the night sky around the corner from her childhood home.

“If somebody would have told me when I was a little girl that one day you're going to be able to make a living working with horses and you're going to travel and see things, I wouldn't have believed it,” said Paye. “It would have been the best possible thing that could have happened.”

Her life took an even better turn several years ago when she met Jose, a fellow groom who came to the United States from Peru with the determination to build a better life. They quickly fell in love and will celebrate their second wedding anniversary in June.

Then came a most unexpected turn, bringing an equal measure of anxiety and excitement. At age 40, Paye will soon have more than horses, a husband, three cats, two dogs and a ferret to care for. She is eight months pregnant with a daughter who will be named Kinsley.

“I never dreamed of being a mother. I dedicated my life to these horses. That's been my life,” Paye said. “But I believe the universe unfolds the way it is supposed to and here I am at 40, eight months pregnant with our daughter, and we're very excited.”

Despite severe morning sickness that made early stages of her pregnancy extraordinarily difficult, she worked throughout the winter months at Oaklawn Park. She recently helped establish Amoss' barn at Indiana Grand, which is overseen by assistant trainer Katy Allen.

“I think Courtney doesn't think that she needs much help at all and we've been kind of careful because we don't want to treat her like something is wrong with her,” Allen said. “But all of the guys constantly jump in to help her. Nobody wants her going up in the hay loft. Nobody wants her bedding down stalls or picking up hay bales or feed bags or anything like that.

“It's really been kind of a team effort in the barn. Everyone has been on the same page and it wasn't like I said anything to the other grooms. It was just something they did.”

With the blessing of her obstetrician, Paye intends to report to the barn every morning, stopping to greet each of the horses assigned to her before she begins her chores, until her body signals that she must stop. She typically thrives on her daily routine.

“Those quiet mornings I have with them before the sun comes up, before the training starts, that's my favorite time of day,” Paye said. “I love taking care of them. I love trying to keep them happy.”

Serengeti Empress is foremost among the horses she has tended to. The filly became so attached to her last summer at Saratoga Race Course that she would gently bite Paye's toes as she prepared to leave the stall. It was as if to say, “'Please stay and fuss over me a little longer.'”

Paye fusses over every horse.

“She is not just a person who works with horses. She is a horse person,” said Jose, 34. “She doesn't care if the horse is going to run in a $5,000 claiming race or a stake. She takes care of every horse.”

Paye's dedication deep into her pregnancy also stems from the reality that she and Jose have modest means with which to satisfy major expenses they will soon encounter. There is no such thing as maternity leave for backstretch workers. They consider themselves fortunate to enjoy a rare day off.

“My husband and I have a bit of money set aside. But it is a big stress, to be honest,” Paye said. “I know we can make it work. I don't really have a full plan, but we're just going to do it. He's going to keep working as hard as he can and I'll get back to work as soon as I can.”

Although Jose toils primarily as a groom, he is licensed as an assistant trainer and looks forward to advancing his career. He noted that there are ample opportunities to gain extra income on the backside.

“I worry,” he said, “but I'm going to start doing extra things so we can afford everything.”

While Kinsley is an infant, they are considering giving up an apartment they rent near Indiana Grand to live in a recreational vehicle that has many payments remaining.

Amoss is well known for his dedication to hard-working employees facing challenging circumstances.

“Tom is really willing to work with people like that,” Allen said. “He doesn't leave anybody stranded.”

Allen said it is possible that Paye might assist with laundry or paperwork as a way to generate income before she can return to the barn.

“Her job is cemented with us,” she said.

Paye already knows that Kinsley's earliest memories will be of the racetrack.

“She's going to grow up different from other kids,” the mother-to-be said. “She's going to travel. She'll definitely ride a horse before she can walk.

“I hope that she wants to work with horses. I would love for her to work at the racetrack. If she doesn't, that's okay, too. I just want her to have a passion in life.”

Whatever the future holds for Kinsley, she will be blessed with loving, devoted parents. She will be in the best of hands.

If you wish to suggest a backstretch worker as a potential subject for In Their Care, please send an email to [email protected] that includes the person's name and contact information in addition to a brief description of the employee's background. 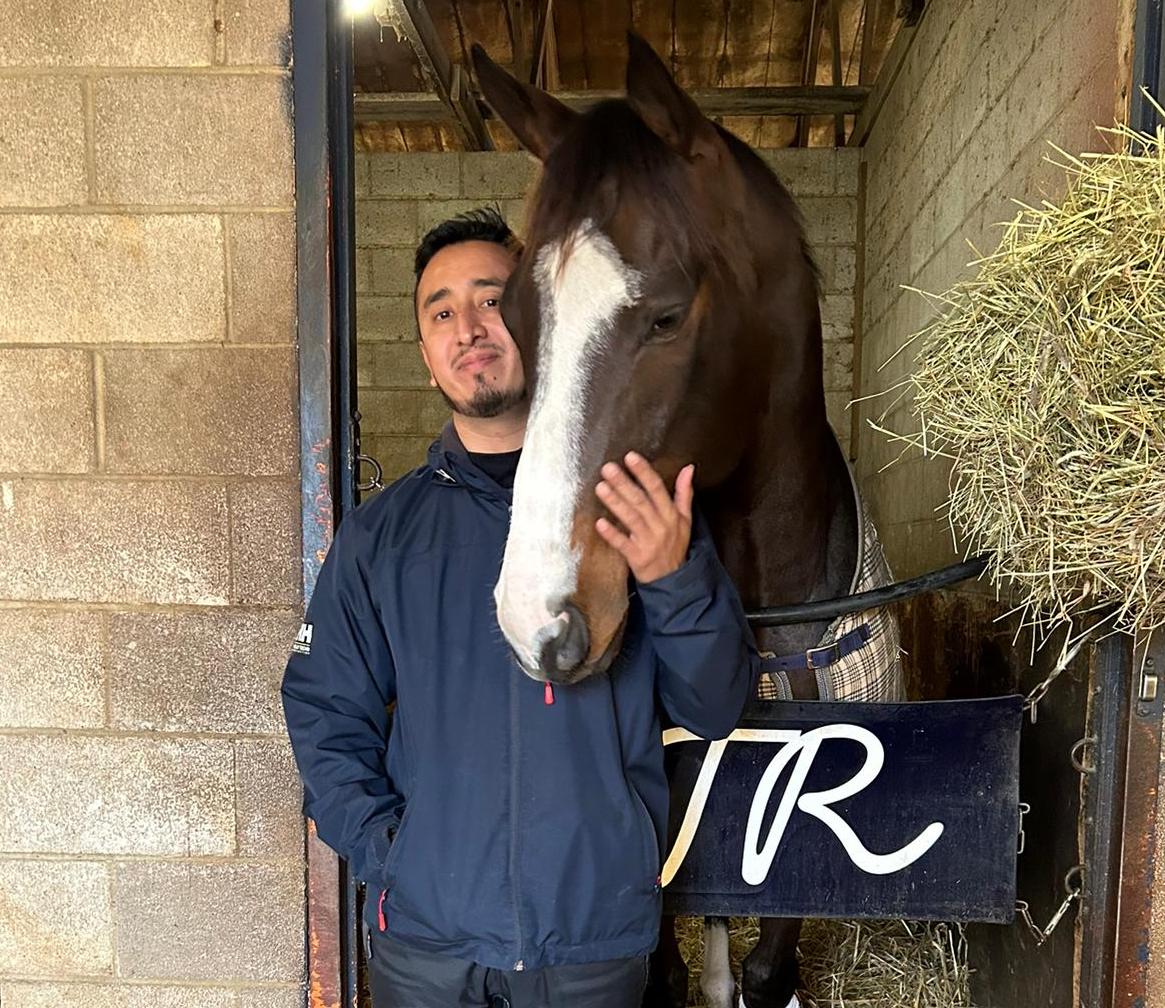 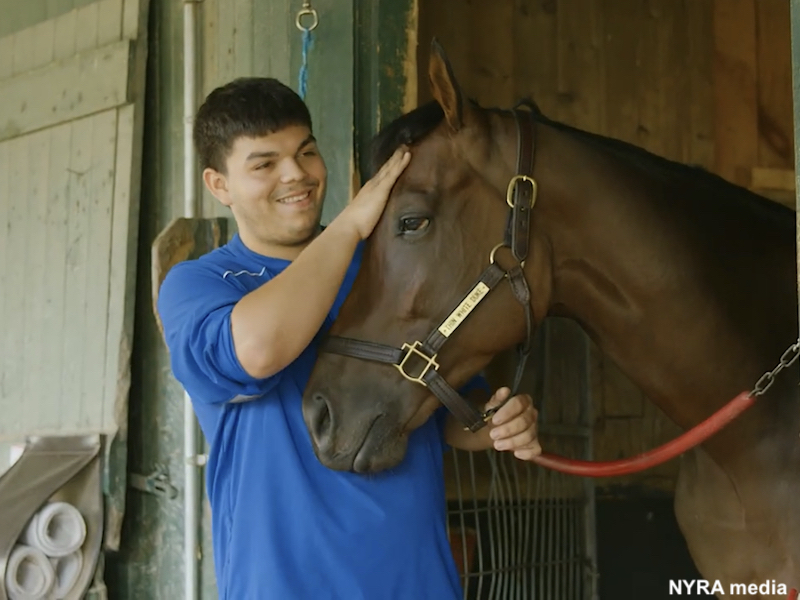 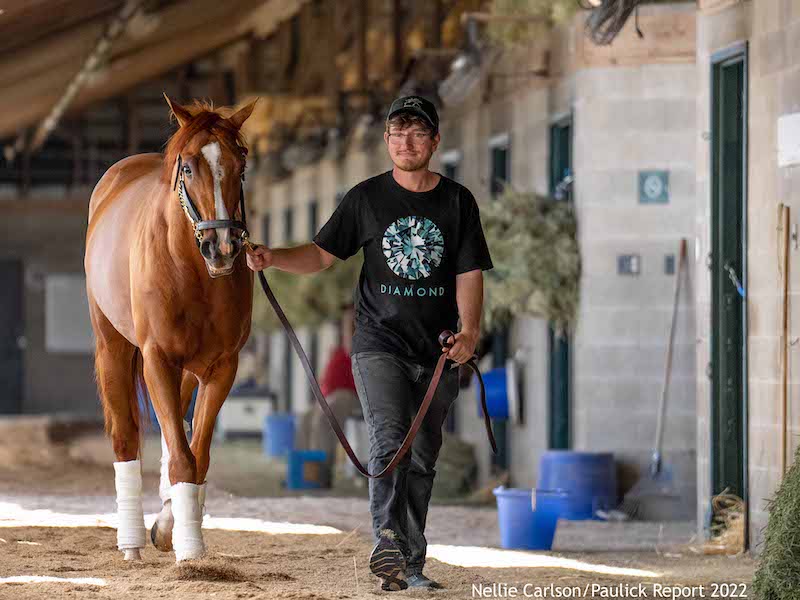