Amelia Green reached a crossroads in her young life four years ago. She was not sure whether she wanted to remain in the United States or return to her native Nottingham, England.

She was equally unsure about what the next step in her career should be.

Green had abandoned her attempt to establish herself as a jockey. The need to lose as many as eight pounds a day to make weight had become too onerous and diminished her quality of life. She knew she needed to take another direction.

“I kind of just hit a wall,” she recalled, “and wasn't sure what I wanted to do.”

Green confided in Michael McCarthy, a West Coast trainer who employed her as a freelance exercise rider. McCarthy, who had learned invaluable lessons as an assistant to Todd Pletcher, offered to contact his former boss about a potential cross-country move for her. She was instructed to call Pletcher at a set time the following day.

Green felt some trepidation as she prepared for what she anticipated would be a rigorous interview when she reached Pletcher, one of the preeminent trainers off all time with a record seven Eclipse Awards to his credit.

“Michael McCarthy put me in touch with you about a job,” Green began.

“Yeah,” Pletcher responded. “When do you want to come?”

Green, speaking outside one of Pletcher's barns at Palm Beach Downs in Delray Beach, Fla., laughs in recalling that life-changing conversation.

“I didn't know it was so easy to get a job with Todd Pletcher,” she said. “I don't know what Michael said to him. He must have said some nice things because I thought there was going to be an interview process.”

Undoubtedly, McCarthy strongly endorsed Green because it is generally not so easy to get a job with the demanding Pletcher and his highly-regarded operation.

Pletcher quickly came to appreciate the talent McCarthy sent his way. Green, 28, has become an integral figure in the barn's success as an exercise rider and traveling assistant.

“When Michael contacted me and told me she was very good, I took him at his word and he was certainly right,” Pletcher said. “She's terrific on a horse. She's very good on the ground as well. She's a hard worker, dedicated and focused on her career.”

When Green packed her Hyundai Elantra to drive from California to join Pletcher's string in Florida, she never imagined that trek would take her on the wonderful ride she is enjoying with Life Is Good. The ultra-talented 4-year-old is viewed as the horse to beat as he continues preparations for the $12 million Dubai World Cup on March 26 at Meydan Racecourse.

Life Is Good, winner of six of seven lifetime starts, followed an authoritative score in the Breeders' Cup Dirt Mile by dusting Horse of the Year Knicks Go by 3 1/4 lengths in the Jan. 29 Pegasus World Cup at Gulfstream Park.

Pletcher said of the pairing of the 5'5″, 122-pound Green and powerful Life Is Good: “He's a horse that can get a little too aggressive and she's done a great job of getting him to relax. She does a good job breezing him. They get along really well.”

Life Is Good receives superstar treatment. As part of the effort to help him to relax, he is the first horse to train at Palm Beach Downs.

“He kind of tells me what to do most of the time and I try to sit against him and try to ease him down a little bit,” Green said.

The son of Into Mischief would gallop all day if his rider permitted it.

“The last quarter of a mile, he'll try to grab you,” she said. “If he didn't do that at this point, I'd probably be worried. It's like he knows he's coming to the end and doesn't want to pull up.”

Green never carries a riding crop when she gallops Life Is Good.

“The power he has, everything he does is just so effortless,” she said. “You don't even feel his feet come off or hit the ground. You just feel like you're floating in air. I've never sat on a horse like it.”

When Green breezes Life Is Good, Pletcher maintains radio communication with her. Although she has developed a clock in her head, the bay colt does everything so easily that it would be easy to misjudge their speed if she did not have the trainer in her ear. She cannot recall a moment when she felt as though her mount was fatigued.

“Even at the end of a breeze, sometimes I end up at the three-eighths pole before I can pull him up,” she said. “He just loves what he does and he just wants to keep going and keep doing it.”

Green and Life Is Good experienced one worrisome moment as the sun rose at Palm Beach Downs when they encountered a coyote. Perhaps another horse would have been intimidated. Life Is Good wanted to give chase.

Kirkpatrick & Co Presents In Their Care: Horses Teach Clapham ‘Something New Every Day’

Kirkpatrick & Co. Presents In Their Care: Schosberg Always Answers The Call On Aftercare 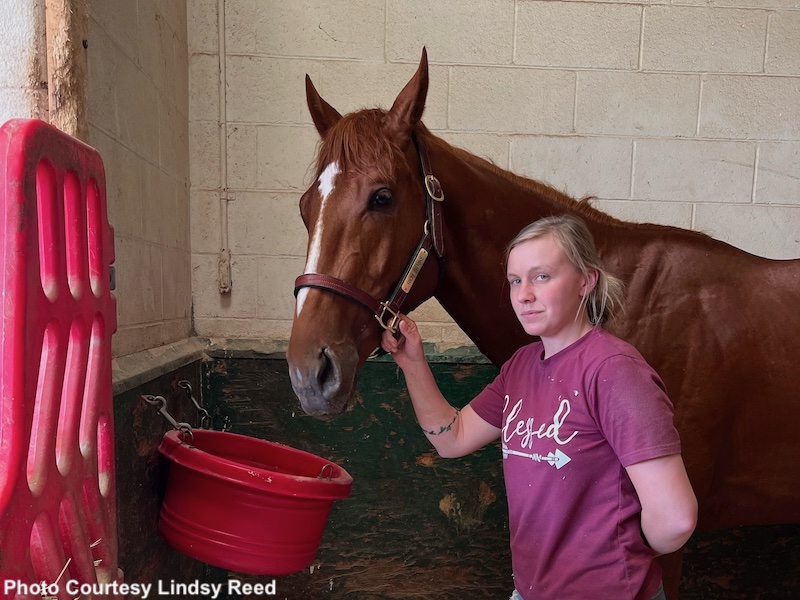 Kirkpatrick & Co. Presents In Their Care: Lindsy Reed The ‘Right Hand’ Of Family Stable That Shocked The Derby