Say the Word arrived at Phil D'Amato's barn in the autumn of 2020 as an accomplished 5-year-old, but the trainer sensed the gelded son of More Than Ready had more to offer. He appeared to be a timid horse that lacked confidence, and was not deriving as much as possible from his training each morning.

What to do? D'Amato assigned Say the Word to Paulina Cano, a groom with almost three decades of experience.

Burgoo Alley had gone winless through three starts in Ireland and D'Amato was downcast when he first laid eyes on her early last year. The unsettling overseas journey to the United States had taken a toll on the 3-year-old. She had dropped so much weight her ribs were visible.

What to do? He again turned to his go-to caretaker, the 59-year-old Cano.

“In terms of being a groom, Paulina is like the horse whisperer,” D'Amato said. “You can give her any kind of horse, ones with more cantankerous attitudes or quiet ones. She just has a way of making them happy. She finds a way to their heart.”

The once-antsy Say the Word responded last season with two wins and a pair of second-place finishes in seven starts. He set career highs for earnings with $353,500 and for earnings per start with 50,500 on behalf of Mark Martinez's Agave Racing Stable and breeder-owner Sam-Son Farm. Say The Word was plenty good in the spring, winning the Elkhorn Stakes (G2) at Keeneland last April and placing second in the Shoemaker Mile (G1) at his Santa Anita home base in his next start. He retained his form until the end of the season, rallying from last to bring home the Hollywood Turf Cup (G2) and help D'Amato to his first training title at Del Mar's fall meet.

“Within a week or two flat, you'd be amazed at how much weight she put on and how good her coat was,” D'Amato said. “It was all that hard work that she put into the filly to feed her and take care of her and make sure she was happy.”

Owned by CYBT, Michael Nentwig and Ray Pagano, Burgoo Alley emerged as a turf standout. She broke her maiden going six furlongs on June 20 at Santa Anita in her second U.S. start. She easily handled the move to a mile on grass, prevailing in an allowance optional claiming race during Del Mar's salty summer meet in mid-August. She emerged as a graded-stakes winner on turf when a late rush allowed her to edge Spanish Loveaffair by half a length in the one-mile Autumn Miss Stakes on Oct. 30 at Santa Anita.

Cano points to Echo Eddie as her greatest success. He debuted by running for a $12,500 claiming tag at Bay Meadows on Oct. 3, 1999. By the time his career was over at the end of the 2003 season, the former claimer turned multiple stakes winner had banked more than $1 million in purses for trainer Darrell Vienna.

Not surprisingly, Vienna did everything possible to retain Cano. They were together for 24 years before Vienna retired in the spring of 2016.

D'Amato was ecstatic when he was able to hire her.

“Good grooms are extremely hard to come by. It's starting to become a lost art,” the trainer said. “It's a very skilled profession and it takes someone who can extend TLC to them and try to find all of the little things without them talking to you. It's just all about body language and taking care of their needs.”

Cano grew up with horses and cows at her family's farm in Santa Rosa, Guatemala. Her husband, Jose Dolares, ventured to the U.S. in 1993 to begin a career as a groom that is ongoing. He works at a nearby barn at Santa Anita for trainer Richard Baltas. At Dolares' urging, Cano followed a year later.

“It was a better life. I could make more money. I loved the United States since the first day I got here,” Cano said during a phone interview, with assistant trainer Rudy Cruz acting as interpreter.

Cano's work ethic and attitude have everything to do with her success. She is one of the first to arrive at the barn from her home in Duarte, Calif. She always comes bearing treats of all kinds.

“I try to never bring problems here,” she said. “I try to always be nice to horses. I love them and am kind to them and they are nice to me.”

According to Cano, in a career that has also taken her to Indiana, Kentucky, Louisiana and even Singapore, she has never encountered a Thoroughbred she could not manage.

“Maybe the first day it's kind of difficult to get along with one, but I find a way,” she said. “By being nice and being patient, it gets better and better.”

She and her husband have one son, Luis Alfonso Salazar Cano, 44. He built a career as a surgeon's assistant at a California hospital.

Cano became a U.S. citizen 15 years ago and said: “I am very happy and thankful to be an American citizen.”

As physically demanding as her job can be, she has no plans to retire. When that time comes, she intends to maintain her emotional ties to the barn.

“If that happens one day, and I know it's going to happen, I'd ask Phil about coming back and feeding the horses when I can,” she said.

D'Amato, another participant in the call, assured her she would always be welcome. 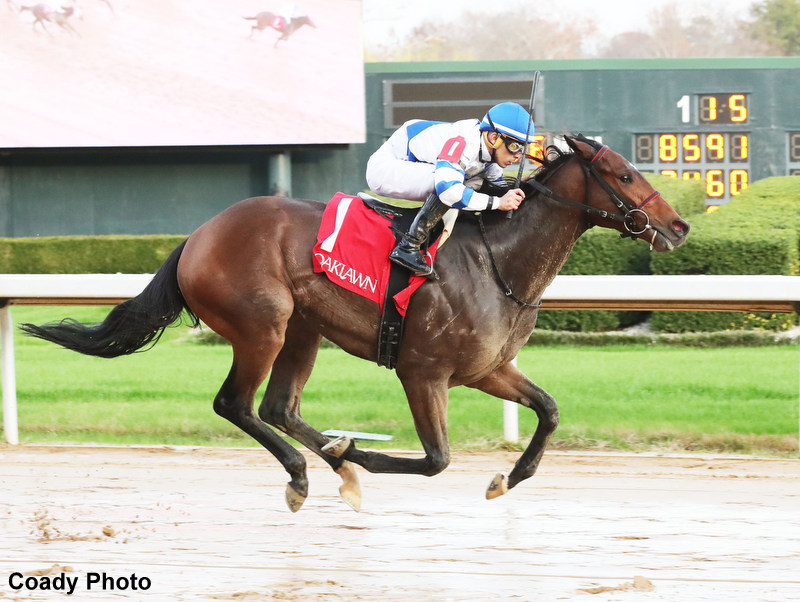