The author with Sorority Girl

Horses can be a lot to handle, and Thoroughbreds, being regarded as hot-blooded compared to other breeds, can be particularly extreme in both their positive and challenging moments.

For starters, most horses can outweigh their riders by about 1,000 pounds. When riders ask horses to do something, whether it be on the ground or in the saddle, there can be a lapse in communication hindering the achievement of the desired outcome for a multitude of reasons.

For example, let's take galloping a horse on the racetrack or trotting a horse through water. While the mechanics of galloping and trotting are natural to horses—they will display those gaits when left to their own devices in a pasture or in the wild—it may not go as smoothly with a rider on their back in the environment the horse and rider now find themselves together.

A horse may be unsure or overwhelmed by the environment. A horse may not understand what the rider is actually asking. Or, because horses, and especially Thoroughbreds, are incredibly perceptive, free-thinking, and not just robots that can be programmed to do whatever their user wants, they may simply say “no” to what's being asked. Because Thoroughbreds are extreme, as I wrote about last month in “'Quirky' Kubo Cat Dished Out Challenges On Path To Success,” that “no” may be accompanied by a metaphorical middle finger.

At this point, the rider gets to choose a response. The challenge is that the ends of the spectrum in the severity and expression of that response are both wrong and potentially dangerous for both horse and rider.

On one end of the spectrum is doing nothing. Now the horse is in control. The rider is relegated to passenger. A poll conducted by Morning Consult in September 2021 found that 47 percent of people believe self-driving cars are less safe than human-operated cars. So, now consider a self-driving horse. As appealing as a driverless car with the technology that Tesla is developing might seem to some, imagine that technology programmed by a horse.

On the other end of the spectrum is excessive force, and the horse racing industry and equestrian world at large are currently reckoning with a disturbing video of Mark Todd, a seven-time Olympic eventer and now a racehorse trainer based in England, hitting a horse with a branch multiple times to encourage the horse and rider to go forward into water at a training clinic that took place in 2020. The British Horseracing Authority has suspended Todd, and Todd said in a statement that he “is very disappointed in myself” for violating “a mutual respect between horse and rider and that patience and kindness is the best way to get results.”

The Todd video is a lesson in what not to do. However, we (considering myself as part of the horse racing industry and equestrian world at large) can do more than just express our outrage at Todd's behavior. Don't get me wrong, it's important to express that outrage. However, what's wrong about the video is pretty clear from the video itself. It doesn't require every person feeling like they have to post the video and establish that they are against that type of behavior.

What's more important is that we go a step further and have a meaningful discussion about the tough topic of teaching and disciplining horses. Best practices across all sports are evolving. Football may be the most notable sport that has had to reconcile with player safety. How coaches encourage players to “get back in the game” has evolved from a stern warning about toughening up to specific protocols to follow if a player suffers a concussion. The key is that the focus is shifting from what's best for winning to what's best for the athlete's health and wellbeing.

Horse racing is still trying to figure out that shift. What's accepted at the track is still mainly driven by winning. Many medications are given to horses because it gives them the best chance to win. The perception, unfortunately, is that even the ones caught administering medications improperly—whether that be those that are illegal, those that are present above an allowable threshold, or those that are not prescribed for that specific horse—still only receive a “slap on the wrist.” Pushing horses to compete through injuries, perhaps minor ones, is about winning when taking a little extra time off may be in the best interest of the horse.

If Todd, for whatever positives he contributed to the equestrian world that earned him a knighthood, should get his license suspended for his actions in the video that has surfaced because people believe he put the wellbeing of the horse in jeopardy at the expense of the horse's development in the sport of eventing, there should be more accountability for similar actions that are not in the best interest of the horse but are still accepted as standard practice.

I don't know whether using a lunge whip or a crop on the horse in the Todd video would have made the situation better. I don't know whether using a lip chain to walk a horse is always the best option and how that compares to a nose chain or just a plain lead line. However, I do know it's time we start asking some questions and having difficult discussions rather than just assuming we have the answers and posting about that on social media.

Sometimes a little curiosity and being open to new ideas are just what we need to actually get to the answers that will ultimately make a difference. It doesn't matter how long someone has worked with horses; good horse people know there's always something to learn. Bottom line, let's educate ourselves, learn from our mistakes, and grow from them. 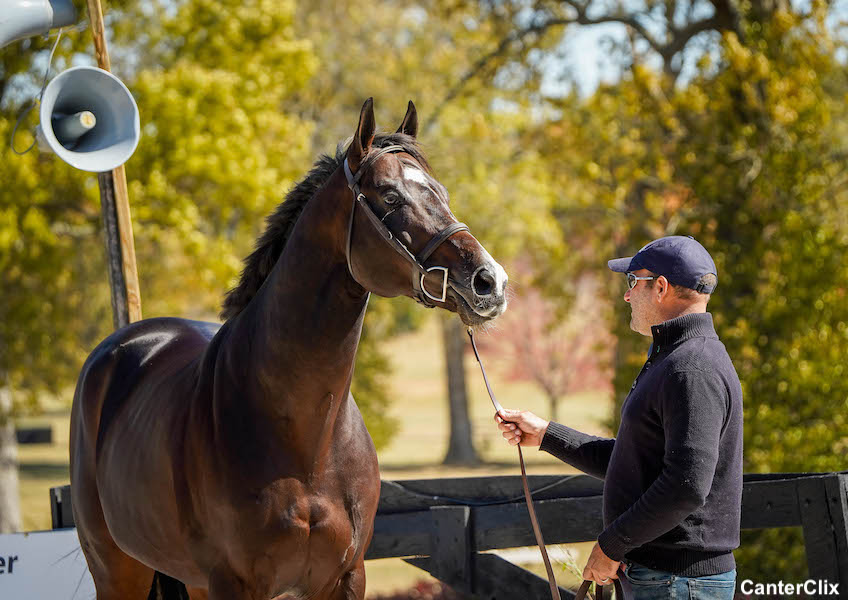