When things go wrong like in these dressage tests for Sorority Girl and Jonathan Horowitz (top) and Tiny Dancer and Ashley Horowitz, they come from different places rooted in their horses’ learning curves.

If horses could talk, this is what I imagine the responses would be if my wife and I asked each of our top event horses, “Can you do (fill in the blank with something we'd like our horses to do)?”

Ashley's chestnut mare Tiny Dancer (JC: Emily's Pegasus) would respond, “Yes, I'd love to!” There is definitely an exclamation point on the end of Sussy's response to express her excitement about literally everything. That excitement sometimes results in overjumping a cross country fence by a foot, but she wants to do all the things.

My chestnut mare Sorority Girl (JC: Grand Moony) would respond, “I don't know, can I?” There is definitely sarcasm on the end of Moo's response. This is the response you've probably heard from a smartass child who may not want to do it and points out how the question only asks if she is able to do it, not that the person asking actually wants it done. Moo is opinionated and questions whether she has to do something.

My wife and I celebrated our one-year anniversary this month and are grateful to be living our dreams through our event horses. However, the path each of our top event horses has taken so that we can continue to chase those dreams has been very different. The lesson of this second part of the three-part mini series “Not Every Horse” that I'm exploring through this column is that horses, just like people, have very different personalities and learning styles. It's crucial to take those into account when training a retired racehorse for a new career.

That may seem obvious, but when the evaluations of horses are based on their physical performance, the effects of the horses' personalities on their learning styles may more prominently influence their physical progress than their actually physical ability.

A racehorse may have all the physical talent in the world, but without the desire to fight and go for a small opening on the rail, that horse's physical talent won't come out in its fullest. Most retired racehorses can physically do anything their riders will ever ask them to do. However, a trainer must bring it out in a way that matches a horse's personality and learning style. Otherwise, the retraining will stagnate or possibly decline if horse and rider can't get on the same page.

My wife and I have similar looking chestnut Thoroughbred mares with similar physical strengths. However, how we've each been able to bring them out has been different because not every horse responds to the same training techniques.

For Ashley, Emily's Pegasus retired from racing at Fonner Park in Nebraska as a 4-year-old on May 13, 2020. One week later, she arrived at our Super G Sporthorses farm in Parker, Colorado. One month and one day after her last race, Sussy competed at Intro at the Mile High Derby about 10 minutes from where we live and finished fourth in a field of 21 at Intro in the combined test featuring dressage and a challenging, winding cross country course of 21 obstacles, including water, a ditch, and a bank.

“She had no idea what she was doing,” Ashley said, looking back. “She was just excited to be doing it. I just had to point her at a jump, and she was like, 'Yes! I'll do that!'”

Ashley also rode Grand Moony during the mare's first year off the track as a 4-year-old. Like Sussy, Moo showed promise among big fields at the 2017 Thoroughbred Makeover, placing 11th of 83 in Show Jumping and 10th of 44 in Freestyle.

However, Moo was not excited about her retraining before the competition and would sometimes plant her feet and refuse to move. Ashley, although admittedly annoyed, never panicked. She recognized this was part of Moo's learning curve. She would ask me to stand nearby and gently pull Moo's bit when the mare stopped. It was a low-cost way to convince the chestnut mare to move forward without a fight.

I bought Moo and did my first recognized events with her in 2018. Because of Moo's personality as a horse that questions what is being asked of her and evaluates whether or not she wants to do it, we've had our share of setbacks.

After completing our first recognized event at Beginner Novice at the 2018 Spring Gulch Horse Trials, our next three recognized events included an elimination for refusals at cross country jumps, a fall at a ditch on cross country, and an elimination on dressage after she planted her feet, refused to move, and backed out of the arena while kicking over the “A” block.

Because of these setbacks, she's been a tremendous horse to learn on and has forced me to step up and be a better rider. I'm proud that in six years of riding, I'm now competing at Novice on a horse I used to announce in races and at the Thoroughbred Makeover.

I've learned to appreciate the extreme highs and lows and life lessons that the sport of eventing offers. Arguably my favorite riding picture is from this year's Spring Gulch Horse Trials in May when Moo, unhappy due to the combination that we were doing dressage while other horses were jumping and that I still struggle with being balanced during dressage, decided she was done with our dressage test, made a scene, and planted her feet. Although the judge gave us plenty of time to recover, she eventually honked her horn to signal our elimination…on dressage. However, Moo still wouldn't move. I turned to the judge, smiled, and shrugged, and we both laughed at the scene my mare was making.

Moo is never dangerous and never bucks. She just sometimes acts like her show name of Sorority Girl. On the other hand, she loves to jump and is also an exhilarating ride.

As talented as Sussy is as well, she also has her challenges. She has made scenes in dressage, too, but those have come from overexcitement that manifest themselves differently than Moo's metaphorical eyerolls. Ashley has received comments that judges have written on her dressage tests of “buck leaps” and “I bet she loves to gallop” this year in her first full year of competition.

Yes, she does love to gallop, and Sussy is now turning in double clear cross country rounds at Training level as a 5-year-old. She and Ashley are headed to the upper levels, but Ashley also realizes that Sussy is still learning.

Although I'm still waiting until my dressage is more consistent before I move up to Training, Sorority Girl and I have joined Tiny Dancer and Ashley in taking lessons and schooling Training cross country and stadium jumps. As much as I questioned whether Moo was the right horse for me during our early struggles, I appreciate that adapting to her personality and learning style is paying off.

Ashley restarted both of these mares, and if she insisted on a single route that both of them had to follow, neither of them would be as successful as they are today. Like snowflakes, no two OTTBs are alike. By adjusting to when a horse's personality starts to come out and they begin to express their opinions, there's a better chance of creating an effective partnership where horse and rider enjoy the ride and have fun and a few laughs in the process. 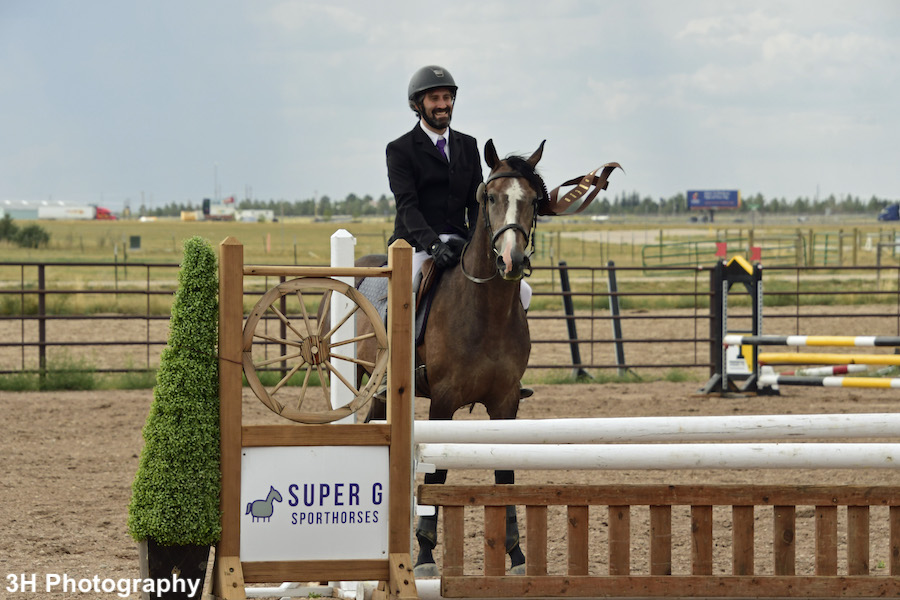