Outrageous Dance, who raced from 2014 to 2016, takes a big drop into the water with Katy Robinson in the CCI4*-Short at The Event at Rebecca Farm.

Sunday, July 24, 2022, will go down as an historic day for Bally's Arapahoe Park — and not just for what took place at the racetrack in Aurora, Colo.

On the track, Collusionist won his tenth career stakes race at Bally's Arapahoe Park in the six-furlong Arapahoe Park Sprint. The 6-year-old dark bay Colorado-bred gelding loves racing in his home state. The stakes milestone was his 14th total victory in 18 starts at Arapahoe since his especially memorable “Silky Sullivan” debut in July 2018.

But that's only part of what the racetrack would celebrate on July 24. That's because 1,000 miles away in Kalispell, Mont., there were two horses from Arapahoe Park competing in international competition at The Event at Rebecca Farm, one of the most prestigious horse shows for the equestrian sport of eventing in the United States. Both finished as the highest-placing Thoroughbreds in their respective levels after show jumping rounds on July 24 that closed out the weekend of competition. They were Outrageous Dance ridden by Katy Robinson in the CCI4*-Short, a stepping stone toward the CCI5*-Long level at the Land Rover Kentucky Three-Day Event or at the Maryland 5 Star at Fair Hill, and Del Mar Belle ridden by Amy Bowers in the CCI2*-Long, the first long-format level recognized by the Fédération Équestre Internationale (FEI).

It's not the first time that a small group of horses from Arapahoe has taken the spotlight at a major sporthorse competition. At last year's Mega Makeover presented by Retired Racehorse Project, out of the approximately 400 horses that competed in the 10 disciplines offered, there were three that raced at Bally's Arapahoe Park. All three finished in the top 10, and two made the finale as part of the top five, with one of them in the finale in two different disciplines. Mr. Park and Brit Vegas were second in eventing and fourth in show jumping for the class of 2020. Ms. Battlefield and Autumn Sorensen were second in field hunters for 2020. And, Itybityquikasakity and Britany Chism were ninth in freestyle for 2021.

“We race for three months in the summer, but that's only part of our story,” said Shannon Rushton, Director of Racing at Bally's Arapahoe Park. “Our horses make an impact year-round, and that's a credit to our horsemen making a commitment to their wellbeing when they're here, as well as when they're done racing.”

The Colorado Horsemen's Association (CHA), the group that represents the horsemen that race at Bally's Arapahoe Park, has taken a different approach to Thoroughbred aftercare than most racetracks. Instead of partnering with aftercare organizations that oversee the rehoming of horses from the track, the CHA decided to directly support the people who have horses that used to race at the track. That has come in the form of cash prizes at horse shows, like the Spring Gulch Horse Trials, where 13 of the 129 entries in May raced at the event's local racetrack. The track sponsors a prize for the highest-finishing horse that previously raced in Colorado competing at the Retired Racehorse Project Thoroughbred Makeover.

“There are so many great people that take on the responsibility of working with our horses,” said Kim Oliver, president of the CHA. “The horses give us so much on the track, so we want to give back when they've finished racing, and what better way than to the people that now have them.”

Creating a direct line between the racing connections and sporthorse connections of the OTTBs from Bally's Arapahoe Park gives Colorado's racehorses tremendous support to succeed on big stages around the country.

“There's something to be said for the eventing culture of Colorado,” said Robinson, who rode Outrageous Dance in the CCI4*-Short at Rebecca Farm. “There's a lot of people who are into the horsemanship and starting them themselves, and then they get ambitious. It's the nature of eventing in Colorado that you have to cross state lines, so it means you have horses that come from humble beginnings and get spread throughout the country doing the important things because of what it means for the eventing culture of Colorado to be doing milestone events.”

Outrageous Dance, a 10-year-old bay gelding bred in Idaho, raced nine times from July 2014 to July 2016 with one top-three finish. His first United States Eventing Association (USEA) recognized event was in July 2017. At Rebecca Farm in July 2022, he moved up from 20th after dressage to 10th in the final standings following clear jumping rounds where they only added time penalties to their score.

“Every time I think I've found his upper limit, I haven't,” said Robinson, who has also competed Outrageous Dance up to a height of 1.3 meters (4-feet-3) in show jumping. “I have not picked a limit for him, and I will figure it out when I get there, but I don't think I've found it yet.”

Both Del Mar Belle and Amy Bowers, who were profiled in “Horowitz on OTTBs” last month were moving up to the CCI2*-Long level for the first time at Rebecca Farm. They rose from 27th out of 45 after dressage to 17th in the final standings, ahead of the other Thoroughbreds competing at the level.

These horses from Bally's Arapahoe Park are now inspiring their sporthorse riders to become more involved in racing. For Bowers, that means studying racing breeding lines.

“When I bought Belle, I didn't know who Tiznow was because I'm not in the racing world,” she said, referring to Del Mar Belle's Breeders' Cup Classic-winning sire. “But everything I've researched on Tiznow, when you get a chance to buy one, you buy one. And then the dam side with Fusaichi Pegasus, this is great, they have sporthorse stuff on both sides. They didn't realize they unintentionally bred a great eventing horse.”

For Sorensen, who rode Ms. Battlefield to a runner-up finish in field hunters at the Thoroughbred Makeover, it means taking a position at the racetrack as a veterinarian on behalf of the state racing commission starting in 2021.

“I've gotten so much more perspective about racehorses,” she said. “It's been nice to see how the trainers love their horses and take really good care of them.”

It also came full circle for Ms. Battlefield when the mare returned to the track to fill in as a pony horse during the races on July 26.

“I got her the day after her last race, and this was the first time she's been back to the track,” Sorensen said. “I didn't realize you just don't show up and jump right in as a pony horse. I don't even think she's ever had a Western saddle on before. But she'll do anything I ask her to.”

At the end of the day, these horses never actually lose their identity as racehorses.

“He's the easiest to ride at a dead gallop, which makes sense because he's a racehorse,” Robinson said about Outrageous Dance.

So, it's only fitting that the racing connections that work so hard for the success of their horses on the track get to celebrate it when it comes off the track as well. 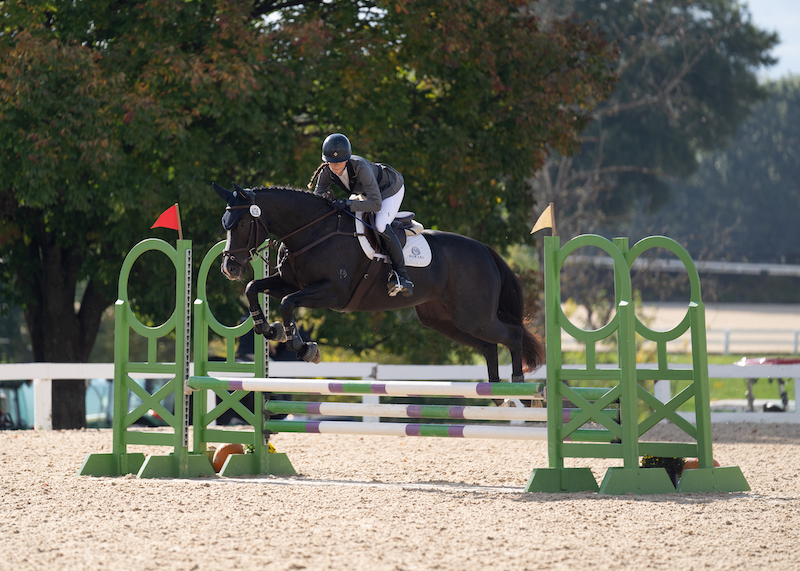 Horowitz On OTTBs, Presented By Excel Equine: For Many Ex-Racehorses, The Makeover Is Just The First Step