California native Keith Doleshel can count on one hand, or with one finger, the number of times he visited the racetrack as a child.

Growing up in San Jose, Calif., Thoroughbred racing existed as a sport of the periphery of Doleshel's personal interests. That was until the year he found himself with a part-time job, a free afternoon, and a wild hare to spend the waning hours of his day in the grandstand of Bay Meadows — the perfect recipe for a racing fan in the making.

“I was about 20 and it was summertime,” recalled Doleshel. “I was in school part time; I didn't have anything to do one afternoon but I saw in the paper on the sports page that there was racing that day at Bay Meadows. Not knowing anything, I decided to go up there and see what it was all about.

“I didn't know what I was watching, but I knew you were supposed to at least go there with money to bet. I definitely didn't know what I was doing with that, and I lost all my money that day because I knew nothing about handicapping. On my way out I picked up a discarded Racing Form that had a tutorial inside on how to handicap races, so I went back a few weeks later and won a bit of money. I really enjoyed that handicapping, puzzle aspect of it all so I really started following racing as a fan shortly thereafter.”

Despite his fondness for his newfound hobby, racing would remain just that for Doleshel, who kicked started his professional career in the golf industry.

“I left school the first time with my associate degree, the transferred to a four-year college in California but didn't like it,” he said. “I wasn't sure what I wanted to do, so I started working full time and I worked in the golf industry for eight or nine years in California. I enjoyed having a paycheck, and I had a little bit of disposal income, so I got involved in a couple very small partnerships with single-digit ownership of horses. That got my foot in the door as far as being able to hang out in the barn area, go watch training, and really see what it was all about. I thought that racing would be a cool industry to be a part of, but I didn't have connections or know anyone at the track at all.”

Much like the day he found the advertisement for afternoon racing at Bay Meadows, Doleshel found another, equally serendipitous ad for the University of Arizona's Race Track Industry Program. The only caveat to joining was the prospect of going back to school and what that would mean for the life he'd built in California.

“I thought that it would be cool to go back to school and study in the program, but the timing wasn't really right,” said Doleshel. “I had a full-time job, and I had no idea how I'd make my way from working all the time to going back to college having been away for so many years.

“At some point, my wife—who I was still dating at the time—and I were trying to figure out where our relationship was going and where my career was going. She was asking me, 'How serious are you about golf? Is this a career you want to do? What would you really like to do?' I didn't think I had the courage for awhile to tell her that I wanted to work in the horse racing industry, but as a credit to her she said, 'Let's talk about this program and see how we can make it work.' We were able to come up with a battle plan for how we could move to Arizona, get me to get my degree in two to three years, and eventually we figured it out. We moved to Arizona, and I took a few classes at a community college to get some classes out of the way that I needed for the RTIP. I then transferred to Arizona.”

At Arizona, Doleshel found himself working and learning in a group of students of varied ages and professional experiences who all shared a passion for racing. It was that sense of community that would confirm to Doleshel he'd made the right move in choosing the RTIP and the sport for his new career path.

“One of the things that was really refreshing to me was that when I went to Arizona, there were a number of non-traditional students,” he said. “There were people going back for second or third degrees and even some like me who had been out of school a long time. But when you're in a program like the RTIP, you're with people who share the same interests as you and that is rare to have in such a small population. To be around 20 or 30 people who also can't wait to watch the races on the weekend — that's just fun.

“I remember us hopping in the car to go to see the Sunland Derby or going to Santa Anita for Breeders' Cup weekend. I remember that instead of taking our final in the classroom like we were supposed to, we actually sat and watched the Kentucky Oaks together and then took the final in the RTIP office. It was a small class, and our teacher kept an eye on us, but we were probably the only group of people on campus whose professor would allow them to move their class to an office so we could all watch the Oaks. I will never forget that. That's the fun stuff that stays with you and makes the program unique. When you find those racing people who share those same interests, no matter your background, you never felt like an outsider.”

Doleshel translated his training at the RTIP into a successful first internship at Santa Anita Park under Rick Hammerle in 2016 where he got the taste for working in a racing office. His next internship came under Martin Panza at NYRA, where he further explored his enthusiasm for pulling the strings behind the scenes. The internship would eventually lead to a job offer, which saw Doleshel make another, even bigger move, this time across the country.

“The Santa Anita internship was my first experience seeing what careers in racing looked like,” said Doleshel. “I thought I wanted to work in the racing department in some capacity, but I wasn't really sure what went into putting together a racing program behind the scenes. After that internship, I knew that was the side of racing I wanted to be a part of.

“I spent the first half of my time at NYRA working in the office at Belmont, the second half working marketing and sponsorships at Saratoga to get the feel of something else other than the racing office. Before I left, I was offered a job from Martin to come back and work. I graduated in December and drove the very next day to New York into a polar vortex where we immediately had to cancel four or five cards in a row during the first two weeks. It was quite the introduction to the East Coast.”

In 2019 Doleshel was named Racing Secretary of Aqueduct Racetrack and in 2020 added Saratoga to his duties. As a member of the team responsible for putting on some of the most high-stakes and high-profile Thoroughbred racing in North America, it's safe to say the thrills of the track have come to far outweigh the thrills of the putting green for Doleshel.

“From the outside, the racing industry seems to be a huge machine that can be intimidating,” he said. “But once you get to know the people; you see that there are a lot of good people in this sport. It's been a great experience with NYRA. Here you're part of strong events throughout the year. Working on Belmont Day, Whitney Day … just fill in the blank with the race of your choice—it's so cool.

“I love putting on the show and being a part of the team that creates that product. I enjoy interacting with horsemen and I think we have a really good group all around. It's great to be able to put out a strong card. I also enjoy the people aspect, interacting with owners and trainers and everyone else. My job now is just a lot of fun. I'm so grateful to be a part of it.” 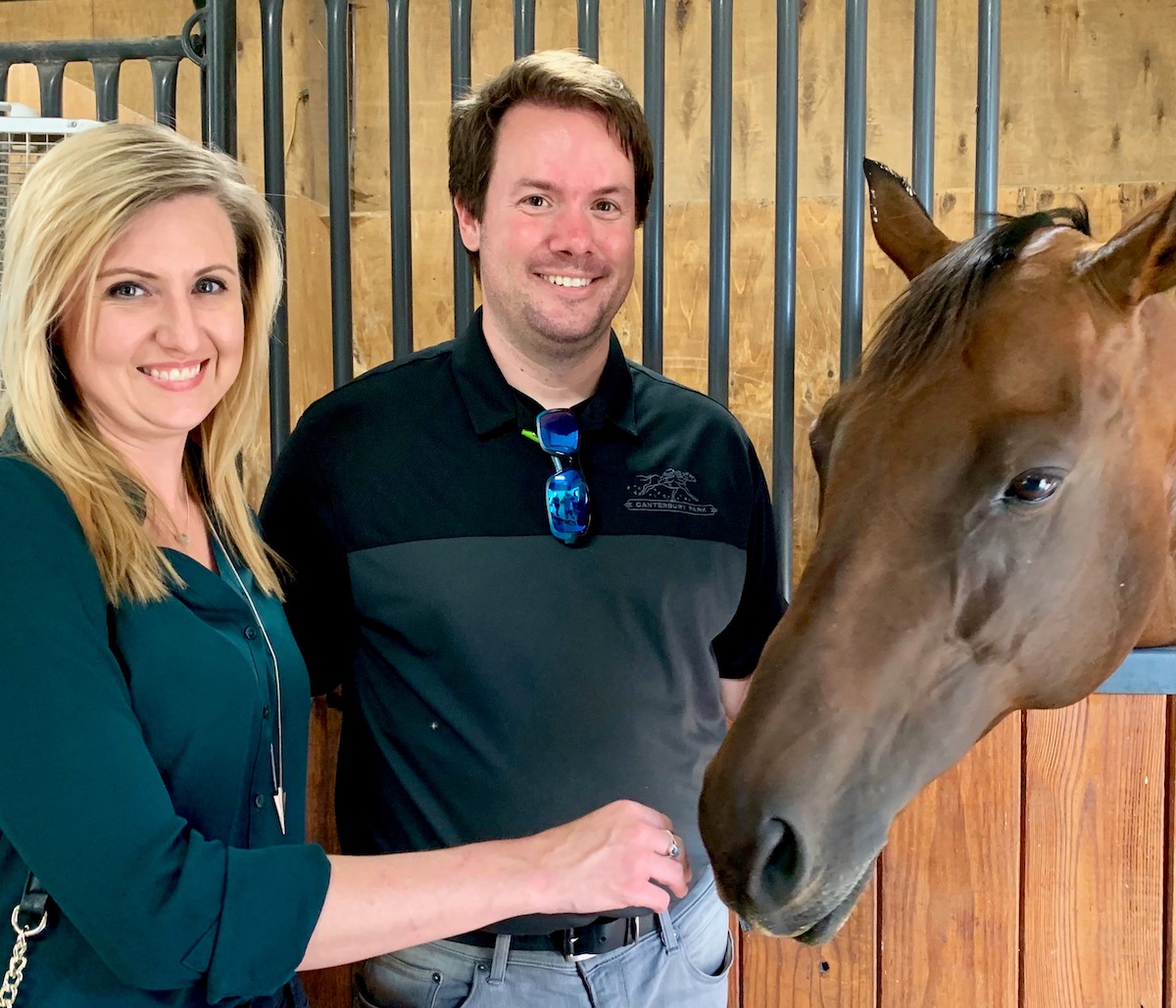 My RTIP Story: For Grad Offerman, It Is Possible To Go Home Again 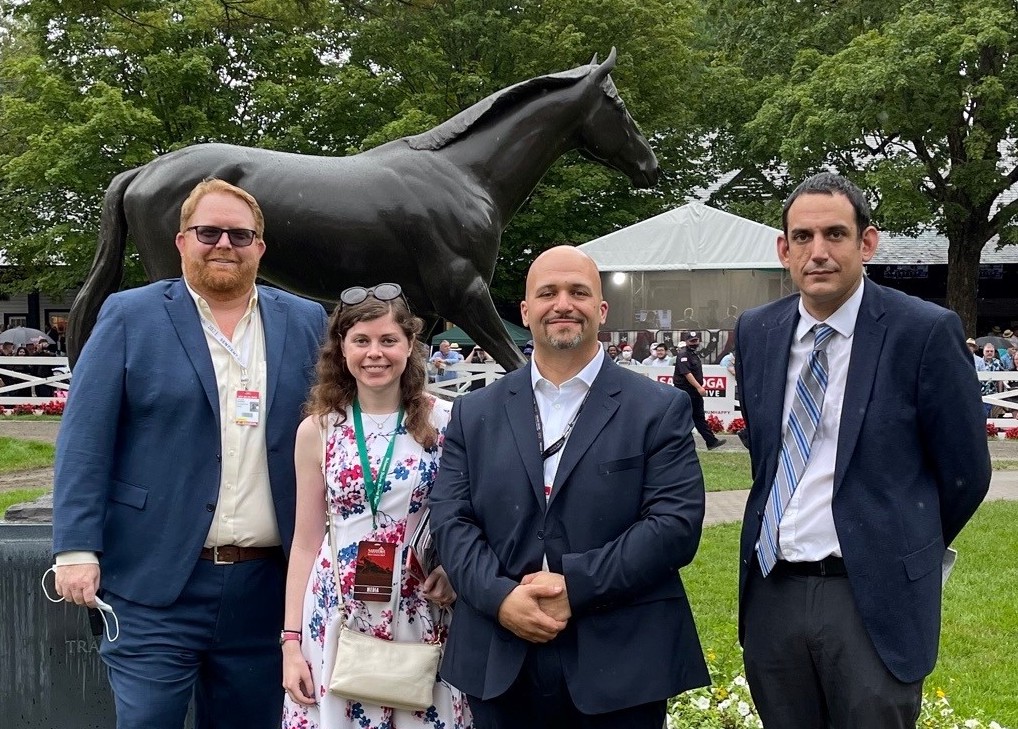 My RTIP Story: Degree Program Gave Longo The Keys To Access The Sport He Loved