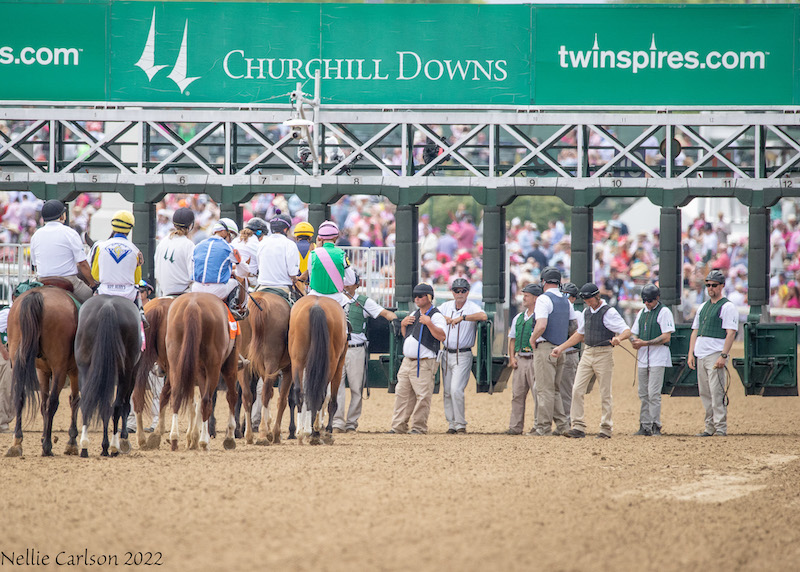 A trio of fascinating match-ups are on tap this holiday weekend, all occurring on Saturday, July 2.

Up first is the Life Is Good vs. Speaker's Corner bout in Belmont Park's Grade 2 John A. Nerud Stakes. The former comes off a somewhat disappointing effort in the Middle East, while the latter was just defeated by budding star Flightline in last month's G1 Met Mile.

Two more Grade 1 winners will face off in Churchill Downs' G2 Fleur de Lis Stakes: Shedaresthedevil and Pauline's Pearl. The heavy-hitters have struggled to find the winner's circle in their most recent starts, drawing competition from the classy She's All Wolfe and Super Quick.

Eclipse Champion female sprinter Ce Ce will attempt to defend her title in the “Win and You're In” Princess Rooney at Gulfstream Park; last year, the effort launched a campaign that saw her triumph in the Breeders' Cup Filly & Mare Sprint.

Also worth noting that the weekend includes the Group 1 Coral-Eclipse at Sandown, in which two classic winners will face three older G1 winners.

Trained by Hall of Famer Todd Pletcher, Life Is Good won 4-of-5 starts last year led by scores in the Grade 2 Kelso Handicap in September at Belmont ahead of a 5 3/4-length win in the Grade 1 Breeders' Cup Dirt Mile in November at Del Mar. Life Is Good launched his current campaign with a gate-to-wire 3 1/4-length victory over 2021 Horse of the Year Knicks Go in the nine-furlong Grade 1 Pegasus World Cup Invitational in January at Gulfstream Park. He finished fourth last out in the 10-furlong Group 1 Dubai World Cup on March 26 at Meydan.

Speaker's Corner has won 3-of-4 starts this year, including scores traveling one-mile at Gulfstream Park in the Grade 3 Fred W. Hooper in January and the Grade 2 Gulfstream Park Mile in March. His impressive 4 1/2-length win in the seven-furlong Grade 1 Carter Handicap in April at Aqueduct Racetrack garnered a 114 Beyer Speed Figure, the highest number recorded this year. Trained by Hall of Famer Bill Mott and piloted last out by Junior Alvarado, the talented bay set splits of 22.78 and 45.01 in the Grade 1 Met Mile but could not turn back the streaking Flightline, who drew off to a six-length score over Happy Saver with Speaker's Corner a further 2 3/4-lengths back in third.

Morning Matcha will be seeking to continue a winning tradition when she faces seven rivals in the $300,000, Grade 3 Delaware Oaks this Saturday. The filly has a career record of three wins, four seconds and two thirds from 12 starts with earnings of $334,390. In her most recent, the Pennsylvania-bred daughter of Central Banker tried the turf for the first time in her career and finished seventh in the seven furlong $150,000 New York Stallion Stakes at Belmont Park on June 19.

2020 Longines Kentucky Oaks (Grade 1) heroine Shedaresthedevil will be in search of her first victory this year in Saturday's $350,000 Fleur de Lis (G2) at Churchill Downs. Aside from her win in the 2020 Oaks as a 3-year-old, the classy Daredevil mare also sports wins in the Clement L. Hirsch (G1), La Troienne (G1), Azeri (G2), Indiana Oaks (G3) and Honeybee (G3). Shedaresthedevil has not found the winner's circle since last year's $400,000 Locust Grove (G3) at Churchill Downs. Jockey Florent Geroux will remain in the saddle for the Fleur de Lis and will break from post 5.

Chief among Shedaresthedevil's rivals in the Fleur de Lis is $150,000 Allaire DuPont Distaff (G3) winner Super Quick. The speedy daughter of Super Saver was fleet-footed early in the Allair DuPont Distaff and spurted clear to a 14 ¼-length romp. Jockey Joe Talamo will have the mount on the Norm Casse trainee from post 1.

La Troienne (G1) winner Pauline's Pearl will attempt to avenge her fourth-place finish in last month's $200,000 Shawnee in the Fleur de Lis. Conditioned by Hall of Famer Steve Asmussen, Pauline's Pearl upset Shedaresthedevil in the La Troienne. The well-bred daughter of Tapit returned four weeks later in the Shawnee but finished fourth to 20-1 upset winner She's All Wolfe. Joel Rosario will have the call from post 4.

The aforementioned She's All Wolfe will return in the Fleur de Lis as well. The Oklahoma-bred daughter of Magna Graduate has eight lifetime wins but only two against open competition – the Shawnee and a conditioned allowance event last May at Churchill Downs. Jockey Francisco Arrieta will have the return call from post 2.

5:20 p.m. – Grade 2 Princess Rooney Invitational Stakes at Gulfstream Park, a “Win and You're In” for the Breeders' Cup Filly & Mare Sprint

Ce Ce will follow a formula for proven success when she seeks to defend her title in Saturday's $300,000 Princess Rooney Invitational (G2). The 6-year-old daughter of Elusive Quality dominated last year's edition of the seven-furlong sprint for fillies and mares on her way to clinching a 2021 Eclipse Award title in the $1 million Breeders' Cup Filly & Mare Sprint (G1) at Del Mar. The Michael McCarthy-trained mare will seek to earn another fees-paid berth in this year's World Thoroughbred Championships at Keeneland when she takes on five rivals in the Princess Rooney, a Breeders' Cup “Win and You're In” event.

Glass Ceiling brings graded success at seven furlongs into the Princess Rooney. The New York invader notched back-to-back graded-stakes victories at the distance in the Feb. 19 Barbara Fritchie (G3) at Laurel and April 9 Distaff (G3) at Aqueduct while producing a four-race winning streak.

Grade 1 stakes-placed Make Mischief is entered to seek her first graded-stakes victory in the Princess Rooney. Gary Barber's 4-year-old daughter of Into Mischief, who finished third in last year's Acorn (G1), is coming off a victory over New York-breds in the Critical Eye at Belmont by four lengths.

5:47 p.m. – Grade 2 Stephen Foster Stakes at Churchill Downs, a “Win and You're In” for the Breeders' Cup Classic

Mandaloun, who won last year's Derby following the disqualification of Medina Spirit, finished ninth in the $20 million Saudi Cup (G1) in his last start. Following the Saudi Cup, Mandaloun was delayed in his return to the U.S. but has been steadily working at Churchill Downs since May 8.

Olympiad will return to Churchill Downs for the Foster where he last won the $500,000 Alysheba (G2) by 2 ½ lengths over Happy Saver and Title Ready on Kentucky Oaks Day. Olympiad returned to Hall of Fame trainer Bill Mott's Saratoga base following the Alysheba and has been training in upstate New York. The bay son of Speightstown is undefeated as a 4-year-old with open-length wins in the $500,000 New Orleans Classic (G2) and $250,000 Mineshaft Stakes (G3).

Another top older horse that was entered in the Stephen Foster is $1 million Oaklawn Handicap (G2) winner Last Samurai. Last Samurai will compete under Hall of Fame trainer D. Wayne Lukas' name for the first time after being transferred from Dallas Stewart following the 1 1/8-mile race on April 23. Last Samurai has won four of 15 starts and, along with his four-length win in the Oaklawn Handicap, sports a stakes win in the $150,000 Poinsettia at Oaklawn. Veteran rider Jon Court has the mount from post 7.

Grade 1 winner Americanrevolution will attempt to avenge his fourth-place effort in last month's $200,000 Blame in the Stephen Foster. The New York-bred Americanrevolution won last year's $750,000 Cigar Mile (G1) as a 3-year-old. The Blame was Americanrevolution's first start of his 4-year-old campaign. The Todd Pletcher trainee will be ridden by Luis Saez from post 2.