A trio of prep races on the Road to the Kentucky Derby highlight this weekend's racing action in North America, from Aqueduct to Santa Anita and in-between, on opening weekend at Keeneland. A total of 26 3-year-olds will be attempting to earn enough points to make it into the starting gate on the first Saturday in May, with 100 points offered to the winner of each of the following: the Wood Memorial, the Blue Grass Stakes, and the Santa Anita Derby.

The fillies hoping to make it into the Kentucky Oaks are also on display this weekend, beginning with Friday's Grade 1 Ashland at Keeneland and continuing Saturday with the G3 Gazelle at Aqueduct and the G2 Santa Anita Oaks on the West Coast.

Two additional Grade 1 races are on offer this Saturday. Up first is the G1 Madison at Keeneland, featuring older filly and mare sprinters including an exciting rematch between Kimari and Bell's the One. Later in the afternoon is Aqueduct's G1 Carter, a sprint for older horses featuring the up-and-coming talent Speaker's Corner.

Friday evening features top-quality racing in Australia, with Horse of the Year Verry Elleegant favored in the Queen Elizabeth Stakes in what could be her final start on home soil. The mare is targeting the Prix de l'Arc de Triomphe this fall, with a possible appearance in England en route to that effort.

Saturday's overseas action is highlighted by the Grand National steeplechase race at Aintree in England, in which female jockey Rachel Blackmore will chase a history-making double.

Repole Stable, Eclipse Thoroughbred Partners and Michael House's Nest, a winner of three of four career starts including the Grade 2 Demoiselle, is the 2-1 morning-line favorite in the field of eight 3-year-old fillies entered Tuesday for Friday's 85th running of the $600,000 Central Bank Ashland (G1) at Keeneland Racecourse in Lexington, Ky.

Trained by Todd Pletcher, Nest was away from the races for two months following her Demoiselle victory and returned with a 6-length victory in the Suncoast (L) at Tampa Bay Downs on Feb. 12.

Two other trainers, Kenny McPeek and Brad Cox, will be trying to add to their Central Bank Ashland win totals.

McPeek, who won the race in 2002 with Take Charge Lady and in 2014 with Rosalind, will send out Cocktail Moments for Dixiana Farms. Third in the Davona Dale (G2) in her most recent start, Cocktail Moments will be ridden by Corey Lanerie and leave from post position seven.

Cox, winner of the 2018 running with Monomoy Girl, will be represented by Flurry Racing Stables' Interstatedaydream, a 5-2 co-second choice. A winner over allowance company by 8¼ lengths at Oaklawn Park in her 2022 debut, Interstatedaydream will exit post position two and be ridden by Florent Geroux.

Invading from California is Reddam Racing's three-time graded stakes-placed Awake At Midnyte for trainer Doug O'Neill. Third in the Rachel Alexandra (G2) at Fair Grounds in her most recent start, Awake At Midnyte (4-1) will be ridden by Mario Gutierrez and break from post position three.

The speed of the race figures to come from Gayla Rankin's Happy Soul, also at 5-2. Trained by Wesley Ward, Happy Soul has won her past three starts by a combined 26¼ lengths and will be making her two-turn debut with regular rider John Velazquez aboard. Happy Soul drew post position six.

Westerberg Limited, Mrs. John Magnier, Jonathan Poulin, Derrick Smith and Michael Tabor's Kimari will attempt to become the first repeat winner of the $500,000 Madison (G1) on Saturday when she faces nine other fillies and mares in the 7-furlong main track test at Keeneland Racecourse in Lexington, Ky.

Trained by Wesley Ward who also won the Madison in 2014 with Judy the Beauty, Kimari returned from a four-month layoff following a seventh-place finish in the Breeders' Cup Turf Sprint (G1) at Del Mar by winning a 6½-furlong allowance test at Gulfstream as the 1-20 favorite by 5¼ lengths.

Back to challenge Kimari is Lothenbach Stable's Bell's the One, who finished three-quarters of a length back in a dead-heat for second in last year's race.

A two-time Grade 2 winner at Keeneland in her career in which she has earned more than $1.5 million, Bell's the One will be making her first start since winning the Dream Supreme (L) at Churchill Downs last November. Trained by Neil Pessin, Bell's the One will break from post position five under regular rider Corey Lanerie.

Graded stakes winners Early Voting and Morello are both undefeated 3-year-olds who have never raced outside of Aqueduct Racetrack while boasting impressive local Kentucky Derby qualifying victories. On Saturday, the two promising colts will do battle against six other sophomores in the 97th running of the Grade 2, $750,000 Wood Memorial presented by Resorts World Casino.

Unbeaten in two starts, Klaravich Stables' Early Voting was a decisive winner of the Grade 3 Withers on Feb. 5 at the Big A last out, earning 10 Kentucky Derby qualifying points.

Morello, who has won his three starts by a combined 13 3/4 lengths, will see two turns for the first time for Hall of Fame trainer Steve Asmussen.

Todd Pletcher has saddled six of the last 11 Wood Memorial victors and returns to this year's race with Mo Donegal, Golden Code, and Long Term. A victory would put Pletcher on even terms with the late fellow Hall of Fame trainer “Sunny Jim” Fitzsimmons, the all-time leading trainer in the Wood with seven wins.

Paradise Farms Corp. and David Staudacher's New York-bred Barese will make his graded stakes debut for trainer Mike Maker. Unbeaten in three starts, all against his New York-bred counterparts, the Laoban colt was triumphant off a nearly eight-month layoff when capturing the 6 1/2-furlong Rego Park on Jan. 9 at the Big A. He handled a stretch-out to a one-turn mile when taking Aqueduct's state-bred Gander one month later.

Lucky Seven Stable's Smile Happy is the 9-5 morning-line choice in a field of 12 3-year-olds entered Wednesday for Saturday's 98th running of the $1 million Toyota Blue Grass (G1) going 1 1/8 miles on the main track at Keeneland Racecourse in Lexington, Ky.

In his lone start of 2022, Smile Happy finished second behind leading Kentucky Derby contender Epicenter in the Risen Star (G2) Presented by Lamarque Ford at Fair Grounds on Feb. 19. Corey Lanerie, who has been aboard Smile Happy in his past two races, has the mount Saturday and will break from post position 10.

Trained by Chad Brown and to be ridden by Flavien Prat, Zandon will be making his first start since finishing third in the Risen Star in his 2022 debut, a half-length back of Smile Happy. Zandon closed 2021 with a narrow defeat in the Remsen (G2). Zandon will break from post four.

Third choice on the morning line at 5-1 is WinStar Farm and Siena Farm's Emmanuel. Trained by three-time Toyota Blue Grass winner Todd Pletcher, Emmanuel won his first two starts and in his most recent outing finished fourth in the Fountain of Youth (G2) on March 5.

Godolphin homebred Speaker's Corner will look to continue a dominant start to his 4-year-old campaign in trying to parlay consecutive graded stakes victories at one mile when returning to sprinting as part of a talented field in Saturday's Grade 1, $300,000 Carter Handicap presented by NYRA Bets for 4-year-olds and up contesting seven furlongs at Aqueduct Racetrack.

The Street Sense colt started 2022 even better than the previous campaign, registering a 102 figure for his 1 1/4-length gate-to-wire win in the G3 Fred W. Hooper in January at Gulfstream Park. He tallied triple digits for a fourth consecutive start for his 5 1/2-length triumph over the same track in the G2 Gulfstream Park Mile on March 5, garnering a 106.

Green Light Go will try to capitalize on the opportunity to live up to his name, cutting back to sprinting following a pair of victories going a one-turn mile at Aqueduct. After being forwardly placed before cruising to a nine-length win against optional claimers in January, jockey Dylan Davis sent the 5-year-old son of Hard Spun to the front in the Stymie on Feb. 26 in a 3 1/4-length victory.

With the starting gate for the Carter not abutting Conduit Avenue like the one-mile race requires, trainer Jimmy Jerkens said the strategy might shift, with his second-place finish in the six-furlong G3 Fall Highweight on Nov. 21 as a guide. In that contest, Green Light Go tracked in fifth position through the opening half-mile before rallying to finish a head back to Hopeful Treasure.

A front-running winner of a pair of graded stakes, the G2 San Vicente at seven furlongs and the G2 San Felipe at 1 1/16 miles on March 5, Richard Mandella's Forbidden Kingdom will get a big class test and will undoubtedly ensure a fast pace on Saturday.

The biggest question mark in Saturday's Derby is Taiba. A brilliant first-out maiden winner, scoring by 7 ½ lengths going six furlongs as the 1-2 favorite here on March 5, the chestnut colt by Gun Runner earned a huge 103 Beyer. Originally trained by Baffert, he's owned by Zedan Racing Stables, Inc. and is one of three Derby entrants to be saddled by Tim Yakteen. 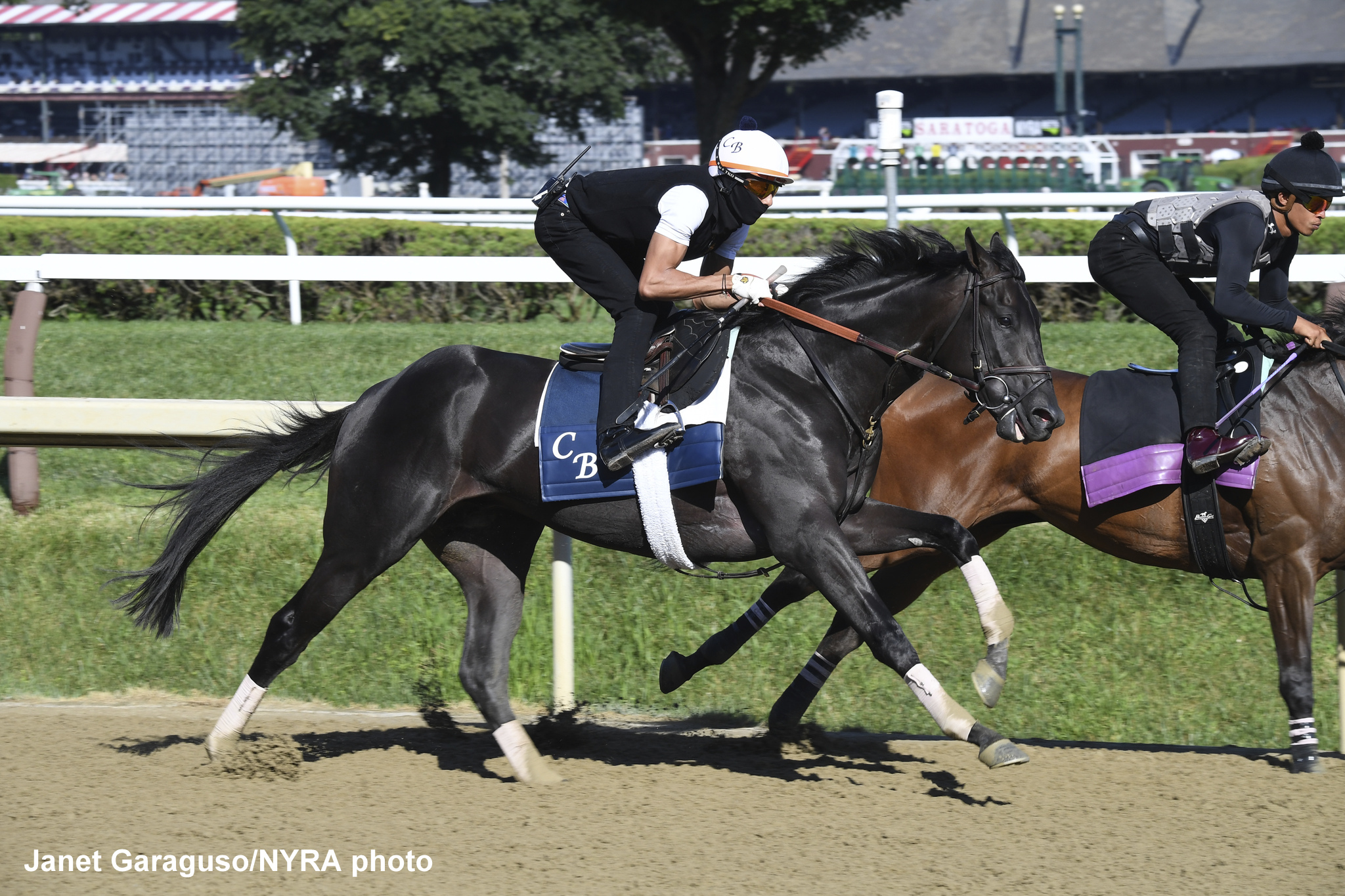 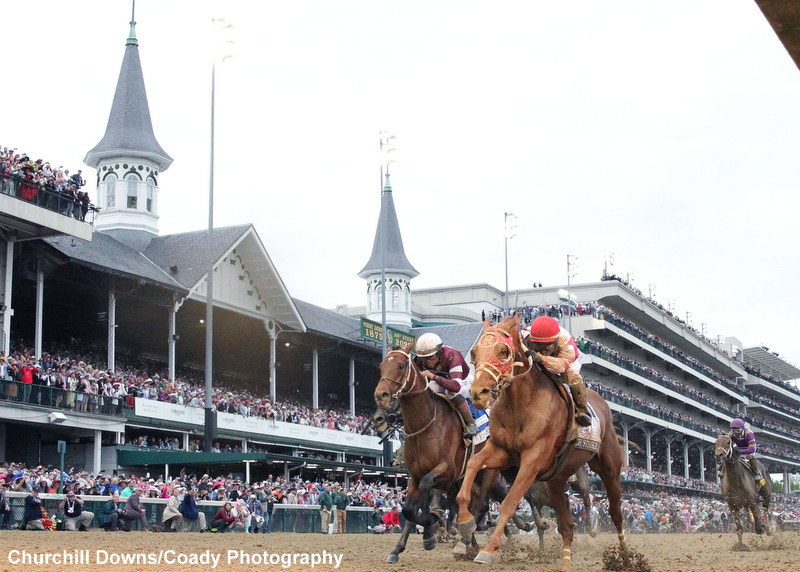 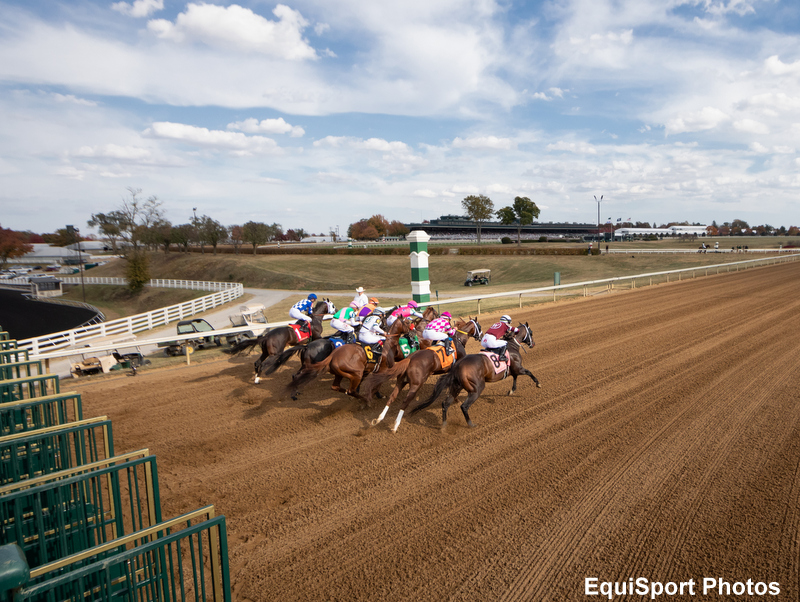 Weekend Lineup: It’s Getting Cold Out There