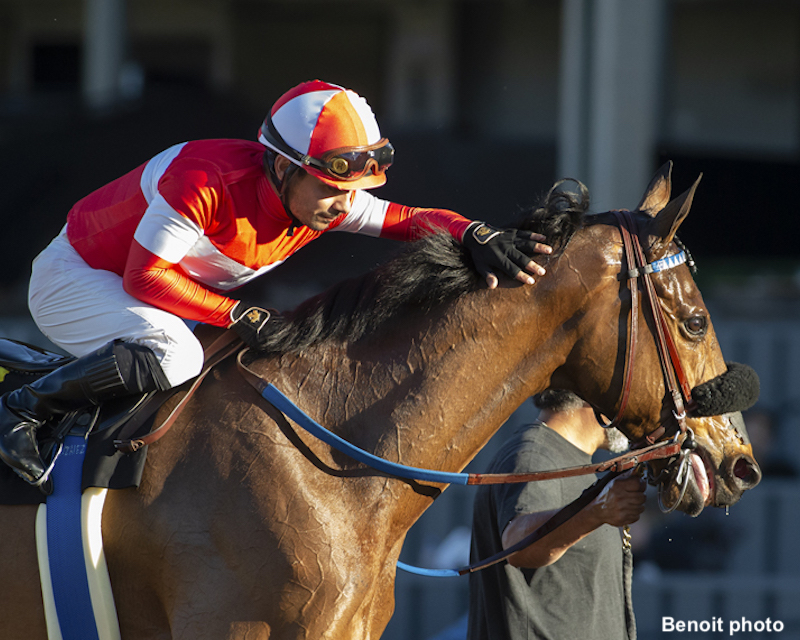 He would stand stock still, like a soldier at attention, as owners came by to inspect and admire his form.

Trainer Phil D'Amato would say, “Acclimate is what you want to see when you go to the sales.”

The muscular bay, well conformed with solid legs and hooves to match is every owner's dream. With over $750,000 in earnings, the 8-year-old stalwart is every trainer's dream too.

“Acclimate is such a cool horse to be around. He just knew his job,” reflected his D'Amato.

There was no ticker tape parade or hero's welcome as he journeyed to the winner's circle on March 20, but Acclimate was barely blowing and stood with eyes glowing and ears pricked to have his photo taken one last time. He had just gone gate-to-wire with nary a challenge to win the Grade 3 1 ½ mile San Luis Rey Stakes by a half-length over Dicey Mo Chara.  While he may not have a retirement ceremony befitting a horse of his statue, Acclimate's story is far from over.

Dr. Courtney Stammerjohan, the resident veterinarian at Harris Farms where Acclimate was foaled in 2014 remembered him.

“We had a competition at the farm for each foal crop where we would each pick one to see who would turn out to be 'champion,'” she said. “I just thought he was pretty. I was not big into picking pedigrees, and I liked his mom too. Acclimate was also outgoing and friendly so it was easy to like him.”

Acclimate would leave the farm and he would make his first five starts for trainer and former jockey Kenny Black before going to D'Amato's barn, where he became the stakes star he is known as today.

“I always had a soft spot for [Acclimate], but as colt I knew I didn't have a shot to get him back” said Dr. Stammerjohan. “When he was gelded just before turning four, I thought, 'There could be a chance,' so I let Jonny [Hilvers] know, 'I want him when he's done [racing], let me have him.”

An experienced off-the-track-thoroughbred owner, Dr. Stammerjohan says she was overjoyed when she heard that Acclimate was coming to Harris Farms for rehabilitation and to retire.

“Jonny called me and said, guess who's coming in for some R&R? He's going to be retired and the partnership group said, if you still want him, he's yours,” she remembers. “He came in totally fit but had a small tendon issue which needs some time to heal. The owners were great and agreed to do platelet-rich plasma (PRP, a treatment which uses the horse's own platelets to stimulate tendon injury repair). Since I knew Acclimate would want to be more than just a pasture pet, this treatment made sense. Judging from his conformation and ability to run long distances, I thought he would make a good eventing prospect in time.”

While it will be several months before Acclimate begins his journey to the world of eventing, it was easy to see why the horse could excel in such a demanding discipline. With a big stride and a zest for running, Acclimate proved throughout his career that he would run as far as the races were written. The gelding relished marathon runs, as evidenced by stakes wins in the G3 San Luis Rey at 1 ½ miles and as a two-time winner of the Santa Anita's iconic G3 San Juan Capistrano at 1 ¾ miles. In each of those races, Acclimate's tactical speed served him well as he galloped on the front-end with ears pricked as if to say, “is this is all you've got? Come on, come catch me.”

The challenge and demand of eventing will suit Acclimate well, says Dr. Stammerjohan.

“Thoroughbreds used to be huge in the cross-country discipline because they have the ability to go the distance,” she said.
“Endurance is key. [The format] has been shortened. Acclimate is high strung, but also very competitive and loves to run. He might not like dressage, but I have been teaching him to relax and be supple. While he is rehabilitating, I take him for walks over poles and cavaletis which he seems to enjoy. I don't think jumping will be a huge challenge for him.”

Regardless of the outcome, it is clear to see that Acclimate is living the life of luxury with Dr. Stammerjohan who dotes on him with daily grooming and treats.

“He nickers for me when he sees me coming but I think that is just because he knows I'm bringing him treats,” she said.

Dr. Stammerjohan also notes that Acclimate enjoys watching mares and foals from his paddock and stands like a statue to observe the daily goings on at the farm. Much to her chagrin, Acclimate has a penchant for dirt.

“He loves to be dirty. He is the dirtiest horse I know, just filthy!” she said. “I will give him a bath and he will immediately want to roll afterwards which drives me crazy because I am a bit of a clean freak.”

Clean or dirty, here is wishing Acclimate the same measure of success he has made on the racetrack.