Cast Horses: What To Do (And What Not To Do) To Help - Horse Racing News | Paulick Report
Skip to content
Closex 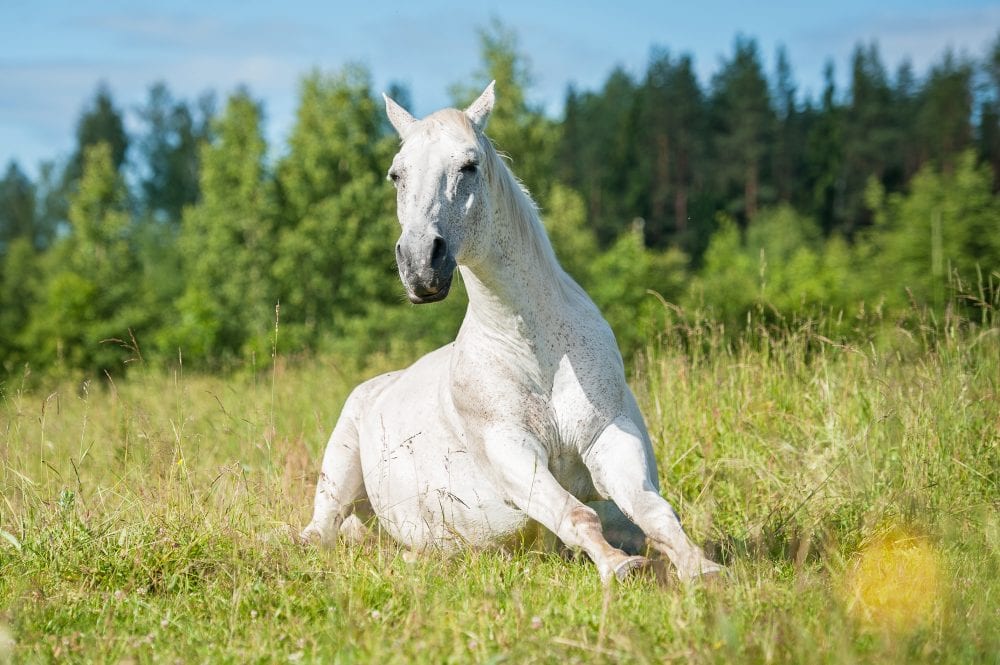 This horse is not cast, but is getting up after lying down, demonstrating the way horses need to push their front legs out to get their balance when rising.

Horsemen probably don't comprehend how big and heavy a horse actually is until it gets cast against or under something and they have to get it unstuck. One futile tug on the mane of a cast horse and the person quickly will realize he or she needs assistance.

“The first thing I would say is to get some help,” said Dr. Sally DeNotta, extension specialist and assistant professor of large animal internal medicine at the University of Florida. “You don't want to be in the stall with a cast horse alone because it's dangerous and they're big.”

A horse can become “cast” against a stall wall, fence or other solid object if it lies down too close to the object (or rolls over), and orients its legs against the object. In order to stand up, horses need to have room to roll onto their belly and unfold their front legs straight out from their bodies. They then push from their back legs up and forward, and onto all fours. If a horse has its legs folded against a wall with no room to roll or straighten its front legs, it cannot stand.

DeNotta emphasized that a cast horse is an emergency because the longer a horse is down, the greater the danger of nerve damage and crush injuries to the muscles on which it is lying.

“It depends on the size of the horse and how hard the ground is that they're on,” she said. “So it happens more quickly in a large horse on concrete than a smaller horse in a well-bedded stall.”

These injuries can happen in as little as an hour, and when owners find a horse cast, they usually don't know how long the horse has already been in that position.

Before attempting to get the horse uncast, horsemen quickly must assess the horse's disposition. Only horses that are fairly level-headed and tractable will tolerate being yanked on when they're down. If the horse is fractious, call a veterinarian to sedate it so it doesn't panic. While waiting for the veterinarian, try to calm the horse by talking to it in a soothing tone of voice. Once the veterinarian arrives and sedates the horse, he or she can pitch in and help get it uncast.

What causes a horse to get cast?

A horse typically gets cast when it lies down and rolls in its stall. Perhaps it is a miscalculation on the horse's part when it rolls up and over and ends up with its legs folded up against the wall.

Some horses habitually get cast, creating anxiety for the owner every time he or she has to put the horse in a stall. If the owner can rule out poor stall construction and an ongoing medical condition, the horse's problem may be mental.

“It may just be poor critical-thinking skills, and he didn't learn from his mistakes,” DeNotta said. “I'm not sure why he would do it over and over, other than he got into the habit outdoors. If his habit is to lie down and roll up and over the top, if he did that in the wrong spot in the stall, he would get himself stuck. He didn't learn that one thing led to the next.”

For a horse that habitually gets cast, DeNotta recommended bedding its stall very heavily around the edges, banking the bedding up in all the corners and along all the walls to encourage the horse to lie down farther away from the stall wall.

Getting the horse uncast

Safety is the top priority in dealing with a cast horse. A cast horse tends to thrash around with its legs as it attempts to free itself, and it can kick a person trying to help it. The first rule is for everyone involved in the rescue to stay behind the horse and away from its legs.

“I always tell people to first grab the mane and make a big, collective pull and try to pull the horse's front end away from the wall,” DeNotta said. “Don't pull the horse by the head or by the halter because you can hurt his neck. Grab the mane and try to pull the shoulders back [away from the wall]. If you can get the shoulders even just a few inches back, that's often enough room for them to get their knees in front of them, and if they can get their front feet stretched out in front of them, they usually can push off the wall and stand up.”

“They can get the rope wrapped around their limbs and hurt themselves,” she said. “And if you pull them up and over toward you, you're pulling the limbs toward you. Even if you get them over to where they can get up, if the rope is still attached to one of their legs when they stand up, that presents a pretty dangerous situation, too.”

After the rescuers free the horse and it is back on its feet, the veterinarian will want to examine it for nerve and muscle damage, especially if the horse was cast for an extended period of time or if it thrashed violently during the episode.

“They can assess nerve function by watching the horse move, and there is blood work that can be done to clue you into the degree of muscle damage,” DeNotta said. “Muscle enzymes in the blood will go up with a horse that is down, so you would expect them to go up even with a horse that was mildly cast. But in a horse that has been down for a long time and has a lot of ongoing damage, they might be very elevated.”

Dr. Katherine Houpt, emeritus professor from Cornell University and founder of its Animal Behavior Clinic, offered this insight into horses that habitually get cast.

“Most horses roll to scratch their backs. Giving the horse a suitable sand pit or other nice surface [to roll on] outside his stall would help,” she said. “If he is afraid to roll in a group of horses, you might try putting him in a paddock alone or with a compatible horse.”

Houpt said she found a cure for one habitual caster when she suggested the owner groom the horse with a metal curry comb, especially on the back, when she was making her last stall check before turning in for the night.

She suggested installing a surveillance camera to observe when and why the horse rolls and gets cast. With those questions answered, the owner can take appropriate steps to prevent it.

Houpt added this warning, “If he rolls but does not shake himself afterwards, he may be having a bout of colic.”

A horse that repeatedly has colic episodes — even mild ones — needs a veterinarian to diagnose the cause and address it. Then the horse may stop getting cast. 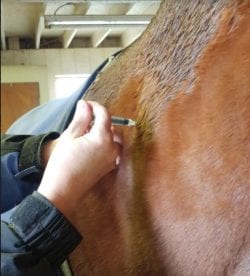