Get Our Newsletters The Friday Show - Field Sizes 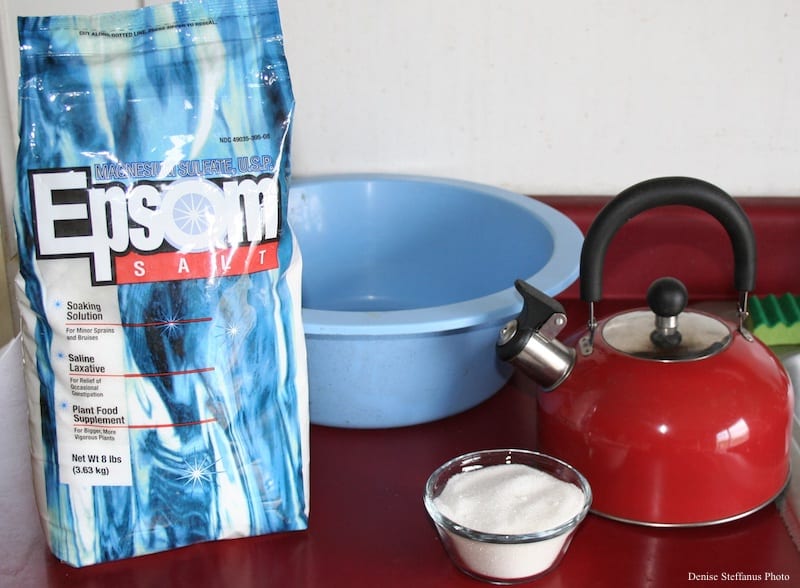 Epsom salt is a staple in every horseman's tack room. Principally used in poultices and hoof packings, Epsom salt draws water out of the body, making it excellent for reducing swelling and removing toxins. If applied as a paste, it generates soothing heat. Because of its ability to pool water, Epsom salt is sometimes used as a laxative to draw water to the intestines to soften stool.

But what, exactly, is it? And how does it do its work?

First of all, Epsom salt's technical name is magnesium sulfate. Magnesium is important for muscle function, a healthy nervous system, sound bones, and healthy kidneys. It is important in the formation of strong bones, with 50% of the body's magnesium found in the horse's skeleton.

Sulfur is a macronutrient, which is required in large amounts by the body because it is one of the building blocks of DNA. Sulfur is one of the most abundant elements on Earth. Methylsulfonylmethane (MSM), a popular antioxidant supplement, has a sulfur component, as does DMSO (Dimethyl sulfoxide).

Epsom salt is available in two grades: USP (United States Pharmacopeia) and technical. Epsom salt with the USP designation is safe for human and animal use. This grade is manufactured, tested, and certified to meet the stringent regulatory standards of the U.S. Food and Drug Administration (FDA) and the United States Pharmacopeia. Technical grade is not as pure, so it is used for agricultural and industrial purposes.

Epsom salt in the diet

“There is some use of Epsom salt orally, but it is very limited because the sulfate ion is very irritating. It gives them diarrhea very quickly,” she said.

For that reason, Epsom salt can be fed as a laxative, no more than two tablespoons for a 1,000-pound horse. When fed in combination with psyllium fiber, Epsom salt has been shown to carry sand out of the intestines in horses prone to sand colic.

Laxatives are rarely given to horses because of the potential to make a bad situation worse, should the horse have an intestinal blockage or twisted gut. Never feed a horse Epsom salt without your veterinarian's approval.

Toxicity is not a threat if magnesium is given orally, but if injected, it can be fatal.

“The body controls magnesium very tightly, but when you inject, you override those controls,” Worth said. “Then the magnesium level goes up very high, and it stops the heart, hits the brain, and the horse dies. Taking it by mouth, it can't be toxic because it has a laxative effect. It just comes flying out the other end.”

She cautioned that Epsom salt in the diet can upset the balance of the gut microflora, the colony of bacteria that maintains a healthy gut. She warned not to give it to a horse whose gut already is compromised or in horses with impaired kidney function or restricted access to water. Symptoms of excess magnesium are depression, muscle flaccidity, and uncoordinated gait.

Signs of magnesium deficiency are nervous tension, irritability, muscle tetany, and neurological problems. Additionally, because the largest store is in the skeleton, magnesium is drawn out of the bones when it is needed to support other functions. No test for magnesium deficiency exists.

“The best way to test is to give magnesium and see if the horse gets better,” Worth said.

Puncture wounds to the foot are prime sites for infection because the penetrating item carries bacteria deep into the soft tissue. In the aftermath of flooding in Louisiana, veteran Baton Rouge farrier Dick Fanguy said he often found horses with punctured soles from debris. This type of hoof wound became his priority because of the danger from pollution in the floodwater.

Many commercial hoof products are designed to dry out abscesses, but veteran horsemen usually rely on the tried-and-true poultice of Epsom salt, vinegar, and clay.

An abscess often starts as a bruise that causes a hematoma (blood pocket) that creates inflammation and damage of the sensitive tissue.

“You might have to open it up to drain it and relieve the pressure,” top farrier Steve Norman said. “Then you go through a process of soaking everything out and then the process of drying it out.”

Dr. Scott Morrison, head of the podiatry department at Rood & Riddle Equine Hospital in Lexington, Ky., treats superficial foot infections by soaking the foot in an Epsom salt bath. This can be done using a shallow feed tub filled with enough warm water to cover the hoof to the coronet band. Add a generous amount of Epsom salt until it stops dissolving in the water. Stand the horse in the solution for 10-20 minutes, then remove the foot from the Epsom salt bath, dry it off, pack the hoof with a drawing poultice, and wrap it.

A poultice of clay and Epsom salt or a packing of Animalintex can be used for two to four days to relieve the soreness.

Epsom salt used as a leg poultice under a bandage draws out fluid (swelling) and soreness and relieves tightness. Although no one has tested it scientifically, swelling goes down if an Epsom salt poultice is applied. Whether it's the pressure from the bandage or the action of the Epsom salt is unknown. Standing a horse's lower leg in an Epsom salt bath also provides relief.

A common belief is that magnesium in Epsom salt used topically can be absorbed through the skin to benefit the body. Humans suspected of a magnesium deficiency are advised to soak in an Epsom salt bath.

“There is no way to absorb it through the skin. It is picked up in the [gastrointestinal] tract through a specific pathway,” Worth said. “There is no scientific proof of that at all. It's an old wives' tale, I think. Magnesium would have to be fat-soluble to get into the skin, and magnesium is not fat-soluble. I'm not going to say it doesn't, but I can't see how. If someone produces a scientific study, I'll believe it.”

Dr. John Madigan has been investigating headshaking in horses since 1991 at the University of California-Davis. He and his team at the headshaking laboratory found intravenous administration of a special 50% solution of Epsom salt obtained a significant reduction in headshaking for horses whose headshaking is caused by the trigeminal nerve in the horse's head.

The study published in January holds that trigeminal-mediated headshaking results from low-threshold firing of the trigeminal nerve resulting in apparent facial pain. The researchers wrote, “Magnesium may have neuroprotective effects on nerve firing that potentially dampen signs of neuropathic pain.”

After Learning To Associate Humans With Food, Wild Horse Has To Be Removed From Assateague Island