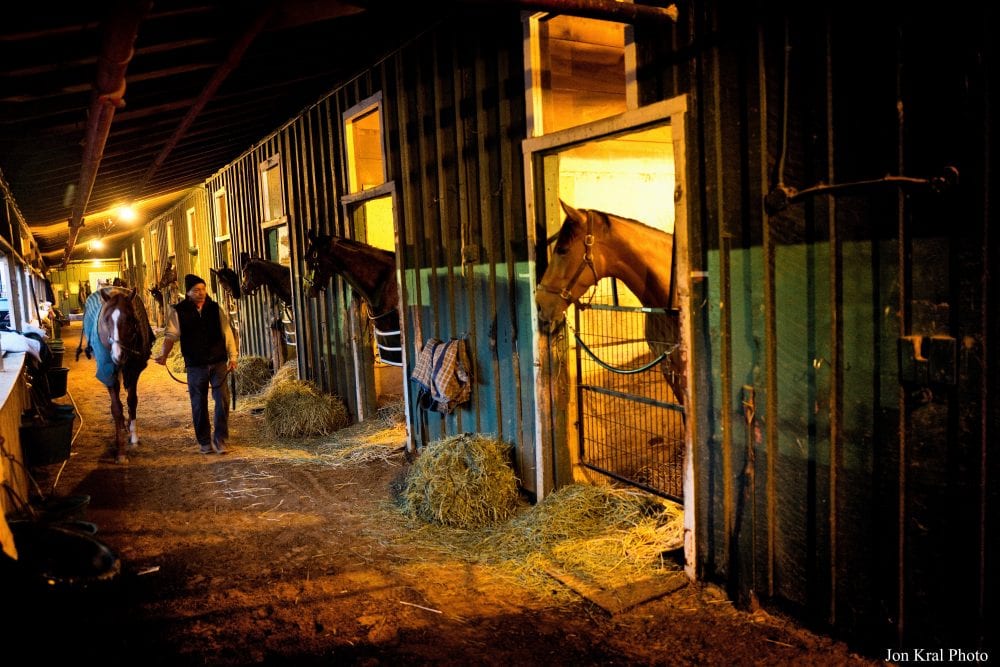 Thoroughbreds and gastric ulcers go together like a picnic and ants. Medications like omeprazole can effectively help treat or prevent gastric ulceration and has important welfare benefits, making these drugs extremely popular in the racing industry. However, the benefits of omeprazole may be overshadowed by some potential drawbacks that may dampen its use in some cases.

Ulcers, which are erosions of the lining of the stomach, cause discomfort to the horse. Signs of gastric ulceration manifests in various ways such as a dull hair coat, weight loss, bruxism (grinding teeth), and poor performance.

Medications like phenylbutazone (commonly known as “bute”) or other non-steroidal anti-inflammatory drugs (NSAIDs) commonly used in horses may also contribute to the development or worsening of gastric ulcer disease although they are generally considered safe for short durations at label doses.

Given the importance of managing EGUS to optimize the health, welfare, and performance of Thoroughbreds, various medications have been developed. Sucralfate coats the ulcers to prevent further damage and allow healing, ranitidine and omeprazole decrease the acidity of the gastric juice, and misoprostol protects the lining of the glandular mucosa in the lower part of the stomach.

Manufacturers of most commercial preparations of omeprazole recommend treating ulcers with 4 mg/kg per day for four weeks. To prevent recurrence of gastric ulceration, horses can be treated longer term at a lower dose, usually 1 to 2 mg/kg per day.

Like any medication however, omeprazole doesn't always come up roses. In addition to the fact that long-term administration of any medication can be economically draining, omeprazole hasn't been tested for its long-term safety. Further, even its short-term use may not be as innocuous as one might think.

In short, omeprazole is used widely both for short- and long-term use for EGUS in horses, has good reported efficacy, but may be associated with a number of important safety concerns.

“In other words, omeprazole has a high safety profile, but it does not mean omeprazole is universally safe,” Sykes said.

Ideally, veterinarians, trainers, and owners would seek to use the lowest possible dose of omeprazole that maximizes outcomes.

“Optimizing absorption will help us get more bang for our buck,” Syke said. “Giving omeprazole after fasting overnight will allow more of the drug to be absorbed compared to horses that had been fed. This means that we only need to administer about half the amount of the drug to achieve the same level of acid suppression if given when the horse has not fasted.”

As we know, though, one of the cornerstones of improving management of horses with EGUS is ensuring horses have continual access to hay. So, should we worry about withholding hay overnight? Sykes advised absolutely not.

“Horses naturally do not eat overnight even if they have ad libitum hay. Instead, they spend most of that time resting or sleeping,” he said.

Sykes therefore proposed the following tips for using omeprazole as safely and effectively as possible based on the currently available information on this drug:

“Sucralfate, ranitidine, and misoprostol should not be administered at the same time as omeprazole. These medications will interfere in the action of omeprazole and the pH of the stomach contents will not increase as expected,” Sykes explained.

Instead, these other medications can be administered at the time of feeding, 30 to 60 minutes after omeprazole administration, or in the afternoon (omeprazole is given once a day in the morning).

“Exercising after omeprazole administration and feeding, even if just a small meal, will also increase the effectiveness of omeprazole because most of the damage to the squamous mucosa in the upper region of the stomach occurs during exercise,” Sykes said.

Overall, Sykes suggested that owners should not necessarily be deterred from using omeprazole, but should certainly cognizant of these safety issues.

“Omeprazole, like any prescription medication, should be used in a safe and responsible manner,” he said. “Implementing the recommended management changes alongside administration will help achieve either comparable or even more complete treatment responses and better outcomes with lower omeprazole doses. This not only has financial benefits but is also expected to further improve the drug's safety profile by using the minimally effective dose.”

Voss: I’m Worried About The Lone Racing Veterinarian In The Classroom