This skeleton, which is used for teaching purposes, shows which ribs on the equine skeleton are fixed..

A horse with kissing spines will be reluctant to flex its back, so it will not use its body to its fullest extent. It will tend to alter its posture and way of going to compensate, which creates imbalances that put undue strain on certain muscles, joints, ligaments, and tendons. The horse may refuse to perform certain functions that cause acute pain. If the rider isn't astute, he or she may attribute the changes in the horse to a leg problem or a behavioral issue.

Genevieve Faith and Catherine Hazelroth have horses with kissing spines. Faith's horse is a three-day eventing mare, Maggie, an unraced Thoroughbred, and Hazelroth's horse Stretch is a cutting Quarter Horse. Both women are clients of Dr. Tracy Turner, a board-certified surgeon in the Minneapolis area who, in 2011, completed a large, eight-year study of horses with kissing spines.

Faith brought Maggie to Turner when she was concerned the then-5-year-old wasn't maximizing her stride, reaching with her shoulders, or pushing off her stifles. Any engagement of Maggie's back muscles elicited pain.

“She overstressed her back muscles a lot, and her hind gluteal muscles were overstrained by working to compensate to get the pressure off her back,” Faith recalled. “If it is sore somewhere, a horse is going to work other muscles harder essentially to make it less painful. Whereas, with a leg lameness, you usually can see it somewhere throughout the leg itself.”

Hazelroth, a veterinary technician, bought Stretch as a 6-year-old from a Texas ranch. The sellers advised her that he had a history of problems with his hock, stifle, and trochanteric bursa (“whorlbone”), which would need to be injected regularly.

After taking Stretch back to Minnesota, Hazelroth tried to cope with his unusual quirks.

“He had really odd reactions during riding that I had not experienced before on other horses with healthy backs, like he was trying to run away from pain,” she said. “He had a weird flight response that didn't correspond with what I was asking him to do.

“The horse would hit a stop in front of a cow. Then, instead of turning with the cow like he was trained to do and his natural instinct is to do, he would just run forward out of his stop instead of rolling back through his turn.”

Hazelroth was puzzled when she pushed Stretch toward a cow and he would hollow his back and do a “dolphin” motion—pushing off with both hindlegs instead of using his hind end properly. Stretch wanted to keep his head up in the air and resisted when she took hold of him.

Trainers told Hazelroth her horse was hock sore because he didn't put weight on his hind end, or they said he was stubborn and advised her to get after him, ride him harder, put a bigger bit on him. But she wasn't buying it, so she turned to Turner, her boss for six years. Turner was amidst his large study of horses with kissing spines, so he quickly recognized Stretch was experiencing back pain. X-rays of the horse's spine confirmed his suspicion.

Turner began each horse's treatment with shockwave therapy, one session a month for three months. Shockwave provides pain relief when applied to the location of the kissing spines and the muscles it affects. With less pain, the horses became willing to participate in a prescribed exercise program, designed for the individual horse's specific needs.

For Hazelroth's cutting horse, Turner added mesotherapy, a technique of multiple (720) injections of an anti-inflammatory solution into the skin, starting at the withers and proceeding over the back and croup. Some veterinarians use injections deep into the affected muscles. Because Stretch primarily was exhibiting nerve pain, Turner suggested that Hazelroth get him a magnetic blanket. She additionally bought a Back on Track blanket, which provides soothing, dry heat.

“The combination of everything we did really helped Stretch to loosen up that back and carry himself in a different way,” Hazelroth said. “He lost a lot of the tension in his back and learned how to carry himself for the first time in his life in a little bit more of a dressage frame, which kept his back and his stifles a lot happier.”

Kissing spines is characterized as Grades 1 through 5, with 5 being the worst. Faith's mare has Grade 4 kissing spines, or “severe overriding,” which makes it virtually impossible to insert a needle to inject the spinous processes. Turner instead administered Osphos, a bisphosphonate, with good results. Maggie gets Osphos every six months as pain management.

Faith enlists a chiropractor before eventing season begins to assure Maggie is in alignment for competition, and Maggie gets regular massage therapy throughout the season to assure she is comfortable while competing.

Horses with kissing spines need lifetime maintenance and possibly management changes, depending on the individual horse.

“Maintenance is really an owner-friendly program, which, of course, makes it easier to follow,” Hazelroth said. “Mesotherapy and shockwave treatments only take maybe a total of 30 minutes combined. In terms of riding him differently, I'd say that came pretty easy for him once he started feeling better. The blankets and such were an easy at-home management program. Put the magnetic blanket on for two hours while he was eating dinner with a fan on him so he wouldn't overheat, then swap that out and put the Back on Track blanket on overnight.”

Faith has a custom-fit saddle for Maggie, and she has to ensure the mare maintains good weight. Faith doesn't allow Maggie to get long breaks because if she starts to lose muscle along her spine, she gets back sore, which sets her back to square one, needing 12 weeks to get her fit again.

“You don't want them to have an injury, so if you can make them strong, you can protect that back,” she said.

Stretch returned to competition and was successful in cutting horse shows until he retired at age 17. For the past two years, he's been an energetic trail horse who likes to cruise at a brisk trot, Hazelroth said.

Maggie also returned to the show ring, doing well while competing in FEI three-day events that consist of dressage, stadium jumping, and cross-country.

“She's fantastic. She loves competition,” Faith said. “Dressage is our weakest phase, and I attribute a lot of that to the kissing spines.”

Faith added that owners of horses with kissing spines should be encouraged.

“It is quite manageable as long as you go through the options, because each horse responds differently,” she said.

Slumber Party? Horses In Groups Might Not Get Enough Zzzs 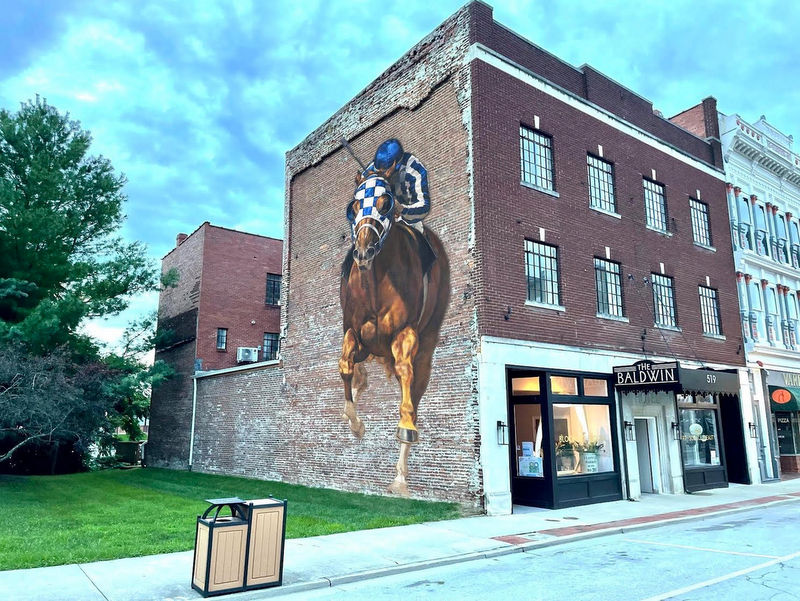 World’s Largest Mural Of Secretariat To Be Unveiled, Dedicated On Nov. 19