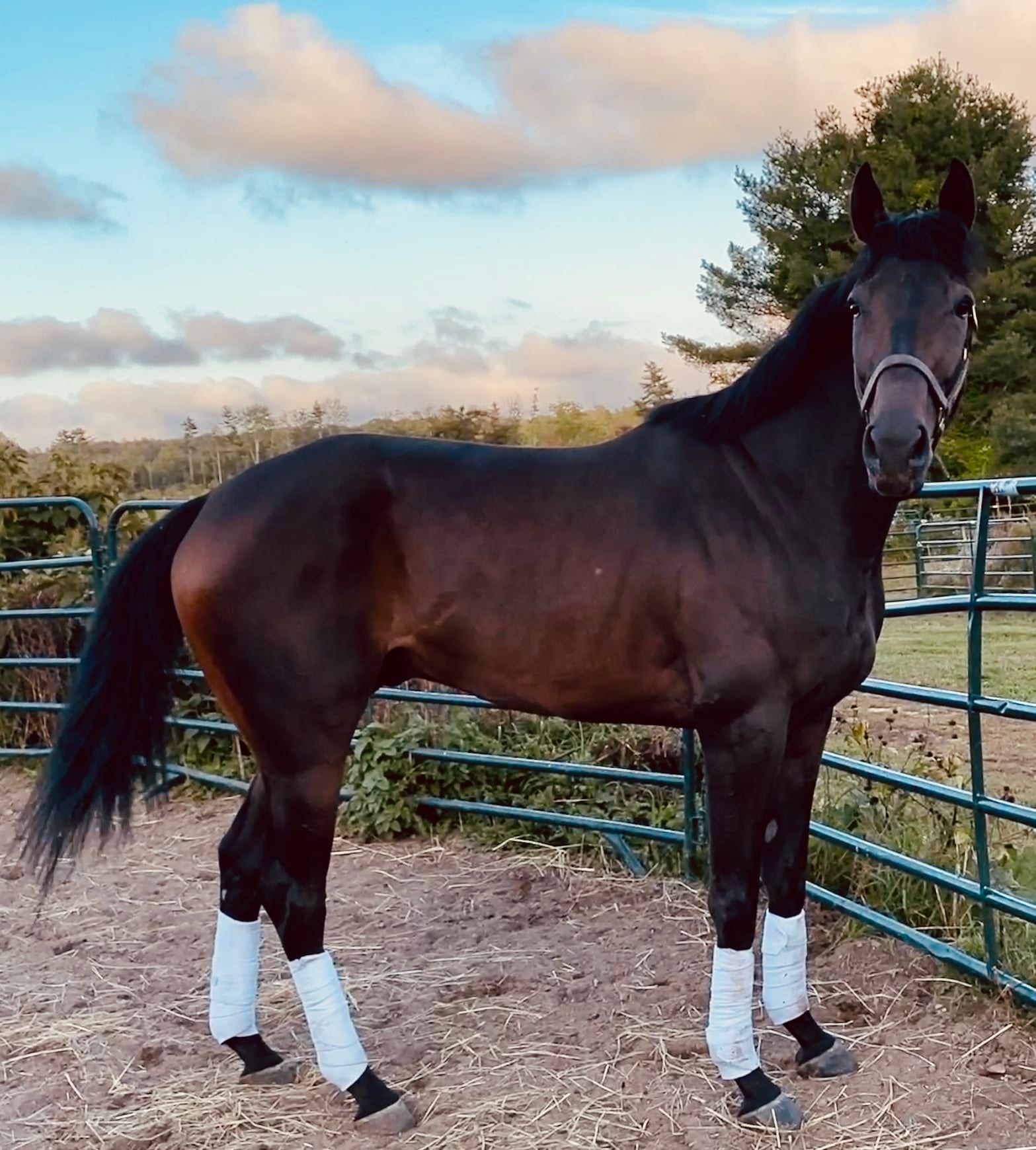 As the importance of Thoroughbred aftercare continues to grow, racetrack owners are finding all kinds of new ways to support their former runners as they move into second careers. This year, Kerr Racing and St. Patrick's Racing Stable, which is the nom de course of Oliver Keithly and Mellissa Perrin-Keithly, have found a somewhat unconventional way to help their runner Epigrammatist find his next steps in life.

Perrin-Keithly posted on Facebook earlier this month with the offer of a scholarship for a rider interested in taking Epigrammatist to this year's Thoroughbred Makeover.

“We had talked about this a year ago, that maybe we should try to give someone else the chance to go to the Makeover,” said Mellissa.

The couple has experience with the Makeover, with Oliver having taken Smugglers Hold to the polo discipline at the event in 2016 and Mellissa competing in dressage that year with One Time Richie. Mellissa also took St. Patrick's Racing graduate Shanghaied to the event's competitive trail discipline in 2019 as a training team with her father-in-law, “Pop Pop.”

The Keithlys were both riders and competitors before they were racehorse owners, with Mellissa focusing on dressage and both riding polo horses.

“It actually started because we had a horse we adopted from CANTER Ohio named Smugglers Hold and I did the Makeover with him,” said Oliver. “We liked the racing part, but were never involved in it. She did English and I did polo, and that's all we were really about. Then I said, 'Let's get into the racing part,' and we went in full bore.”

They launched St. Patrick's Racing Stable in 2018 and aftercare was always a central part of the equation for the stable's racing and breeding operations.

“We wanted to do things our way, take care of the horse from Day 1 until they were 20 years old, 25 years old,” said Oliver. “We wanted to set the horse up for a life beyond racing, because there's more to a horse's life than just racing.”

As such, Mellissa says they have worked to find private placements for their horses at the end of their race careers, and retire horses with their second careers in mind. It's not an easy task from their base in Maine, where winter weather limits the length of the season for many riders, and where there isn't the same vibrant hub of OTTB devotees that there is in Central Kentucky.

This year, Mellissa's plate was already full with the plans she had for her own dressage season and she knew she wouldn't be able to take a horse herself, but Epigrammatist found himself in need of a new job.

The couple are both quick to chuckle that about how the 5-year-old gelding they co-own with fellow Maine resident George Kerr didn't exactly light the track on fire. He has two wins from 23 starts and earnings of just over $23,628 for trainer John Rodriguez. When the son of Soldat bumped his leg in the stall and needed some time off, it seemed to his owners like it was time to call it a day.

“If he got down to a claiming price that was lower and someone took him, we wouldn't feel right about that,” said Oliver.

Epigrammatist came back to the St. Patrick's base in Maine for his rehabilitation, which gave the Keithlys a chance to get to know him hands-on. After a few weeks of turnout, they were delighted with his sweet demeanor and believed he would bring joy to an amateur or a professional rider looking for a Makeover project.

“He got the nickname 'Crush' because all the women would come around the barn and say 'Who's that?! He's pretty!'” said Oliver. “At the track, John Rodriguez was our trainer at the track and his nickname was Hickory because that horse would go out and try, and was rock solid all the way through.”

Although he wasn't particularly fast, Mellissa said Epigrammatist was always interested in running farther – to the point he would keep loping after the gallop out, sometimes proving difficult for experienced jockeys to pull up – which makes her think he could make an eventer.

Mellissa's experience with the Makeover had taught her that the time-limited nature of the event can put a lot of pressure on riders who have made it their big goal. Horses are only able to attend once, and can't be restarted earlier than the December prior to their October competition. The goal of the program is to highlight the versatility of the breed by demonstrating how much progress a horse can make into a second career in a limited time.

Different competitors approach the event in different ways. Some make it a first-year goal with a long-term equine partner; many professionals use it as a chance to prepare and market a sales prospect whose resume is boosted by having completed the process; still other riders enjoy the training challenge and try to take a horse through it in multiple years.

For all of them, there's expense involved with training the horse, entering any shows or clinics they may do in preparation, and the veterinary work that can often pop up with any horse in an athletic endeavor. For riders who like to take project horses each year, there's also financial risk in taking one on who could come up with an illness or injury that negates their ability to be ready by October. Then, there's the expenses with the event itself – entry, stabling, travel, and hauling, which can feel like a strain just as the anxiety of the competition is landing.

St. Patrick's is offering a trainer the chance to help out with those event expenses. Its scholarship would also give the trainer a safety net for the horse – if something isn't working out, he can always come home, so they won't be stuck paying board on a laid-up OTTB who can't make the journey unless they want to. Depending on the situation, there's the possibility the scholarship recipient could become the horse's owner after the Makeover.

“We wanted to take the pressure off of somebody, that now they have this horse and now on Oct. 18 [the end of the Makeover] I don't know what I'm going to do with it,” Mellissa said. “It could be a situation where then that horse goes home with someone, it sits for a few months, and then someone has to start all over again.”

“It's just a good way for our small farm to make sure the horse has the best chance in life after racing, and hopefully other connections might think this is a good idea.”

It has become more common in recent years for racing connections to retain ownership of a horse well into the retraining process, either as a way to ease the transition to a more responsible home, or to get more enjoyment out of a horse in a new context.

Mellissa's deadline for scholarship applicants closed last week, and she will soon begin a Zoom interview process to find the best fit for Epigrammatist. The most important thing she'll be looking for: an interest in bonding with a special horse.

“One of the questions we asked on the application was, 'Can you give us an example of a human/horse connection story that has touched your heart?' and you already can tell who is there and who isn't,” she said.

“Not only did we get some really good applicants, but we got some really good feedback from people who are hands-on with the Retired Racehorse Project, so I was very happy about that,” she said. “If we can help somebody be involved in this and make somebody's dream come true, that's really what we're going for.”

The Horse Comes 1/ST Presented By 1/ST Racing: Gunderson Has Done It All, And Shows OTTBs Can, Too