As summer fades into fall, horse farm managers are either baling and storing some of their last hay harvests, or loading their lofts and storage buildings with hay bought from nearby suppliers in preparation for winter. Even though the outside temperature is about to drop in most of the country, experts say this is the time to think about hay fires.

Just a few weeks ago, a fire ripped through a pole barn adjacent to a horse barn at the University of California-Davis, destroying the building and its hay stores before firefighters got the flames under control. Fortunately, no horses or humans were harmed in the blaze, but the financial loss of the hay in the midst of California's drought will be a heavy hit to the school's bottom line, as it would be to any private operation.

The UC-Davis fire, like too many other disastrous blazes, was traced back to spontaneous combustion from the hay stored inside the barn. 'Spontaneous combustion' is a bit of a misnomer, since University of California extension agronomist and forage specialist Dr. Daniel Putnam said the process is hardly random or truly spontaneous.

“'Spontaneous combustion' of hay (or the seeming spontaneous combustion) is a process internal to the hay itself, and largely driven by moisture and biological activity,” said Putnam. “Although differential between outside air temperature may make a slight difference (only in the area of the bale exposed to the outside), the primary determinants are moisture and the ability of that moisture to escape the bale, and degree of biological activity.”

The moisture comes from both the leaves and the stems of the cut grass or alfalfa, with stem moisture generally believed to be the most dangerous due to its slow escape from the cut plant. Hay producers cut the plants and let them sit on the field to cure until they have judged that the relative amounts of sunshine, dew, and humidity have allowed the cut material to dry. The hay isn't completely dry by the time it is bundled into bales, however, and the gathered material may begin to “respire.” The plant's sugars break down, releasing moisture and heat, which can be compounded by any mold or bacteria in the bale. Heat builds and builds until the inside of the bale can literally smoke and burst into flame.

Properly-cured hay, with a moisture content between 10 and 13 percent, shouldn't have this problem. Perhaps surprisingly, this is even true if the hay is properly cured and later lightly rained upon. Maximum safe moisture content at the time of baling is between 14 percent and 20 percent, depending upon the type of bale.

“Dry hay will absorb some moisture from the air, and equilibrate with atmospheric moisture (in the West this is about 10 percent moisture, and the Midwest closer to 13 percent, I believe), but this normally doesn't cause high enough moisture to cause fermentation and heating,” said Putnam. “Exceptions are stacks that get excessive rain.  Stem moisture is more of a culprit than absorbed moisture in the leaves after normal baling.”

Putnam said bales go through a sweating process immediately after baling, which is when most of the moisture release takes place. On the sunny West Coast where he advises farmers, it's possible to leave the bales in the field, surrounded by regularly-circulating air during this process. In rainier areas though, farmers may need to store the bales as they go through the initial drying process, so he recommends promoting as much air circulation as possible to encourage drying.

The problem is that the end user may not know exactly what the conditions were when the hay he buys was baled and cured, and the grower may not be sure of the hay's moisture content, either—the baler-mounted moisture meters available today are known to have a margin of error of 5 percent, which could make all the difference in sparking a fire.

The largest risk seems to come from larger bales, so round bales are the most likely to experience spontaneous combustion if not cured properly because they have the longest distance from the center, where moisture is being released, to the exterior air. The three-string 125-pound bales and the two-string 50-pound bales widely used for horses can also heat up enough to catch fire, however. More densely packed bales pose a greater threat. This doesn't change much as outside temperatures drop through fall and winter; hay in the center of a large bale or stacked bales will insulate itself as more moisture and heat are trapped and released.

When storing hay long-term, experts recommend managers allow air gaps between stacks and keep the hay as dry as possible to reduce heat and mold potential.

If you're not sure about whether a stack is at risk for fire, Putnam recommends investing in a temperature probe, which can run over $200—peanuts compared to the cost of a lost shipment or destroyed barn. Moisture probes can also be helpful for testing recently harvested hay, and fall in a similar price range.

To monitor a stack without a probe however, Putnam advised taking a sample of hay from the middle of the stack and testing its moisture using a microwave. Most extension agents can walk managers through the method, but essentially it requires microwaving 100 grams of hay in short increments (alongside a cup of water to prevent scorching) until the hay is dry, and comparing the before and after weights to determine percent moisture.

The other method is to put a steel rod into the center of the stack, leave it for several minutes, and pull it out to see if it is hot to the touch. A rod that is too warm to touch could indicate the hay is in the danger zone of 170 F to 190 F. If that happens, Putnam said, it's time to call the local fire department to get their advice on how to safely move the hay and diffuse the potential for fire. 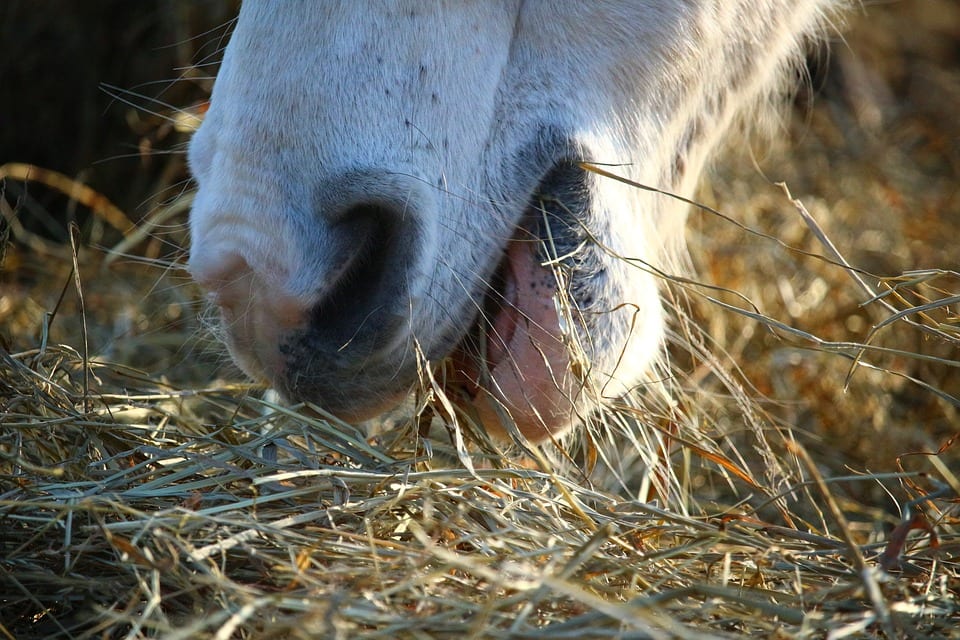