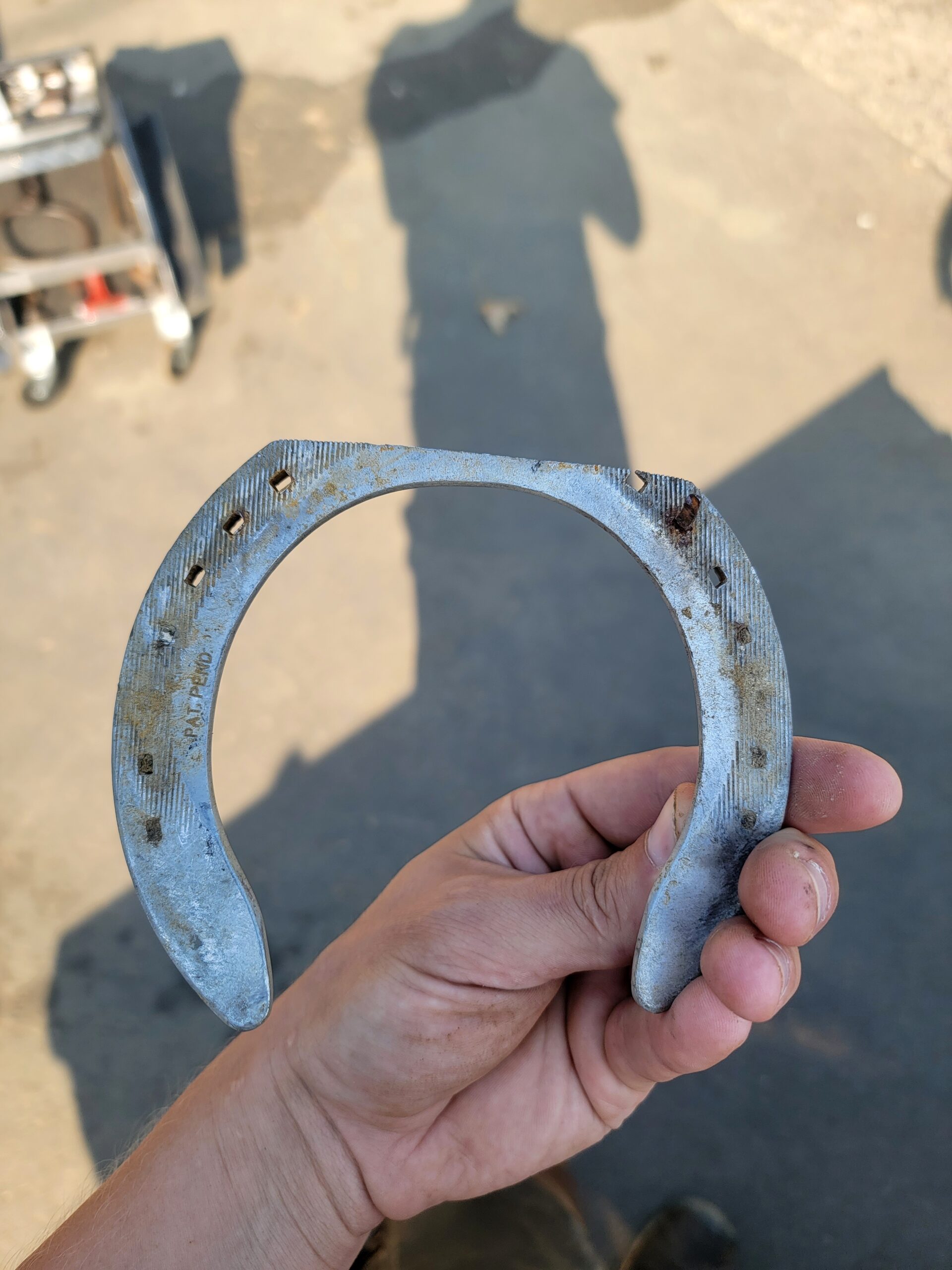 A farrier shows a shoe removed from a horse within three to four weeks of its last trimming. Farriers say they’re seeing excessive toe wear now that racehorses can no longer have toe grabs or wear plates in front. Photo courtesy Gary Gullo

Ever since the change earlier this month to shoeing regulations on the racetrack, farrier Gary Gullo says he's been noticing something which disturbs him.

The Horseracing Integrity and Safety Authority has mandated that racehorses may no longer wear toe grabs or any other sort of elevated plate on their front feet, citing academic research which has found elevated risk of fatal injury associated with the use of toe grabs.

The Authority's new horse shoe rules were not without challenges. We wrote about the policy changes that impacted farriers and shoe manufacturers with regard to hind shoes earlier this month. While it seems that farriers have largely figured out how to navigate the new hind shoe rules, Gullo and others question whether changes may be needed to regulations on front shoes.

The language of the rule prohibits toe grabs or any traction device up front, due to concerns that the elevated steel grabs (which look like thin, rectangular cleats sticking downward from the toe) were changing the angle at which a hoof hits the ground. Experts believe the elevation of a toe via a toe grab stresses the soft tissues on the back of the leg, predisposing them to injury.

But “toe grabs” as such come in different forms. They're usually steel addenda to aluminum racing plates, but some are much longer than others. Conventional grabs are about 5.5 millimeters long, but manufacturers do make front shoes with smaller ones, in 2 millimeters and 4 millimeters. These smaller sizes are commonly called “wear plates” by farriers, because they believe the protrusions are too small to meaningfully assist in traction and at most are simply absorbing extra friction as horses' feet hit hard surfaces.

Gullo shoes horses at Monmouth Park, where many of the horse paths through the barn area are concrete. Several of the facility's barns are across a railroad track from the track and require longer hacks on the unforgiving surface. He has noticed that the lack of steel toes on front feet is causing excessive wear on horses' front toes.

Gullo sent photos to the Paulick Report of used front shoes on which the front toes were worn almost completely through. One shoe he kept on his truck had even worn through its toe clip and had so little of the original material left in the center of the shoe that he was able to bend it in half with his fingers.

When the toe of the shoes wears away, the toe of the hoof begins scraping the concrete. Gullo has not yet had any clients whose horses have demonstrated footsoreness as a result, but said he did know of another farrier's horse whose toes began bleeding as a result of the hoof wall damage.

“It's wearing the toe back past the wall into the white line on some of these horses,” he said. “It's leaving us nothing to work with and it's not great for the horse because we need a toe at an appropriate length.”

Predictably, this kind of damage to a hoof wall will take a farrier some time to correct. Gullo said he's been trying to leave the toe of the shoe out a little farther than he normally would to give the toe of the foot a little more protection, but you can't push that change too far without creating a negative impact on foot angles that creates new problems.

Part of the equation is certainly the aluminum that racing plates are made from, which wears more quickly than steel. Steel shoes are more common in many other horse sports and wear more gradually. Steel shoes have been used on the racetrack but fell out of favor when the lighter and cheaper aluminum came to market. Farriers say there's no specific reason steel shoes couldn't make a comeback, but they're skeptical their clientele could be convinced to embrace something different.

“Traditionally, Thoroughbred racehorses were shod with steel racing plates,” said Steve Kraus, certified journeyman farrier and head of farrier services at Cornell. “There are a few trainers I've spoken to over the years who actually prefer steel because it's more rigid and gives the horse more support.

“I'm not so sure steel is a bad thing for racehorses; it's a little harder to shape on a stall jack. There's a lot of convenience to aluminum and of course it's lighter. As horses are lighter boned, and they seem to be getting lighter boned, there is an advantage to having lighter material on there.”

Glue-ons are also an option to address already-damaged toes, but are more expensive than conventional, nail-on shoes.

Outer rims are permitted and do wear more slowly, but the rims eventually wear down and can leave a horse with a small XT toe, which is disallowed.

The problem doesn't seem to be limited to Monmouth.

“We weren't really seeing too much of this down in Florida and as the rules came into effect I didn't think too much about it,” said farrier Curtis Burns. “As Gary and I started chatting about it and I started reaching out to different people as well I came across the same story.”

Kraus expressed skepticism of whether horses would really be at added injury risk if they were permitted to have wear plates in the front. He was one of the consultants on a project with Cornell looking at necropsies of fatally injured racehorses in the late 1980s. At that time, medication use and bone pathologies were identified to be risk factors.

“They're scapegoating the toe grabs, just like the racetrack conditions were being scapegoated years ago,” opined Kraus. “I would say that although there are studies pointing to toe grabs being connected to fractures, those are much larger toe grabs than we're talking about now. They're scapegoating that because they don't want to address the real issue of why fractures happen in racehorses. Fractures in racehorses are pathologic, not traumatic.”

In fact, Kraus worries that excess wear to shoes could put horses at greater risk for harm in the long term. One of Kraus' guiding principles when he teaches farriery is maintaining the 'golden ratio' between the length of toe versus the length of the rest of a hoof. When the toe wears off this way, it disrupts the geometric balance of the foot.

According to a statement provided this week to Thoroughbred Daily News, the Authority intends to continue listening to farriers' input on its shoeing rules – but stressed its decisions are rooted in research.

While many farriers understand the importance of good research, they worry about the time academic studies can take – and what that may mean for the immediate future.

“I feel like one of the reasons I've had success shoeing horses is just common sense,” said Burns. “And that's what's needed here – common sense. Not case studies, not trying to create something that someone needs to get a grant to find out if we need an XT or not.”