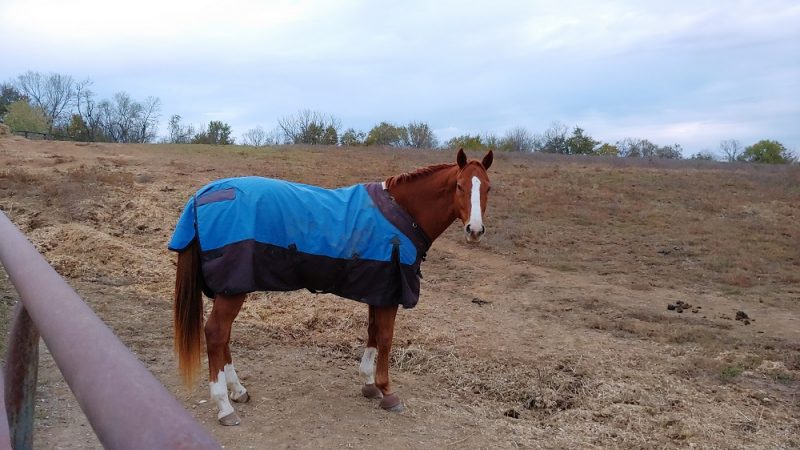 So, I was walking up to this barn, and I see a client strolling down the aisle, shaking her head, obviously concerned about something.  “What's the matter?” I asked.

“I had my horse talk to the psychic,” she said.

This is the sort of instance where you can easily blow a doctor/client relationship by saying something like, “Oh, geez, what an utter and complete waste of time and money!”

Being somewhat wizened to client psychology at this point, instead, I wondered, “What did she say?”

“Well,” my client offered, “my horse hates the color red.”

Perplexed, for among other reasons, because I know that horses are mostly colorblind, I asked, (somewhat reluctantly, because I knew that some answer would be forthcoming), “Why is this a problem?”

Turns out that the horse had red leg bandages, in which his legs could be wrapped at night.  Worse:  he had a matching red blanket.  The poor beast was covered in red.  Fortunately, there was a solution.

“I'm going to have to go out and buy blue leg wraps and a blue blanket this afternoon,” she said. “It's the only way he'll be happy.”

At once nodding sympathetically, and pinching my forearm as hard as I could so as to maintain my composure, I offered her some obviously needed support. I held up pretty well until she said, “Doctor Ramey, I never knew horses were so materialistic.”

“Neither did I,” I said, moving quickly towards a quiet spot where I could lie down and hold my sides.

Actually, the whole idea of blanketing horses is mostly pretty silly. Horses originated in some of the coldest parts of the world: the Central Asian steppes. If they hadn't figured how to stay warm, they would have frozen out long before we started riding them. See — they've got a nice coat of dense hair to provide insulation, in addition to their body mass.

The body mass of a horse actually makes it fairly hard for them to get rid of heat. In fact, getting rid of body heat is the main problem for most large-bodied animals. Horses have less body surface relative to their size than do smaller animals. So, for example, if you're an elephant (not making any weight comments, I'm talking about the animal), you've got a very big body with relatively little surface area exposed from which you can radiate heat. On the other hand, if you're a canary, well, cold weather is a big problem.

(Does anyone sell canary blankets?)

GRAPHIC EXAMPLE:  When I worked at Iowa State University, after I graduated from veterinary school, a horse died in the barns at about 10 p.m. It was 22 degrees below zero outside. All horses that died in the clinic had to have a post-mortem exam. Unfortunately, the pathology lab was closed, so to keep the horse in a state where a good post-mortem exam could be performed, we moved him from inside the barn to outside. About 12 hours later, we did the exam, and the horse was still quite warm inside. What I'm saying is that if dead horses can stay warm in 22 below weather, live horses can SURE do it.

Horses also generate a lot of heat, mostly through digestive activity.  So if, for example, you're feeding hay to your horse in the winter…

WAIT – You are feeding hay to your horse in the winter, right?  I mean, if not, your horse will have a lot worse problems than getting cold.

… then he's going to be generating a lot of heat on his own. Hay, or any feed, adds fuel to your horse's internal fire, as it were.

Now, if you live in Finland, and it's January, and you've body clipped your horse, and you insist on keeping your horses outside all of the time, by all means go ahead and blanket him. But the idea that horses might ever get cold in the warmer climes – say Southern California – is fairly hard to understand, at least from a horse physiology standpoint.

It's not that blanketing is necessarily benign, either. One of the things bad things that blankets do is compress the horse's hair coat. With a blanket on, they can't fluff up their hair and help insulate themselves. In addition, if it gets wet under the blanket – as it can in a winter storm, or, when a horse is sweating under the blanket – the blanket keeps the water from evaporating, making the horse even colder. (As you probably know, cold and wet is a pretty miserable thing to be.)

So, mostly, there's not really any reason to blanket your horse.

However, blanketing certainly does do a couple of things. It may help keep some dirt off of your horse, which can be helpful if you're at a show. Maybe it'll save you some grooming time. If you've decided that the perfect time to body clip your horse is just before the latest blast of arctic air comes your way, putting a blanket on him probably won't hurt. Blankets certainly adorn horses in a delightful color of your choice, which not only allows you to express your latent interior design talents, but it allows you do so without much embarrassment for your horse, since horses are mostly colorblind. However, blanketing does NOT do anything to limit the growth of the coat – coat growth is controlled mostly by day length (as the days get shorter, the coat gets longer, and vice versa).

I've seen catalogs that try to sell you on the fact that not only does your horse need blanketing, he needs a different blanket for just about every conceivable temperature range. I haven't seen the slightly chilly, light westerly breeze, 60% humidity model being marketed yet, but I'm sure it's coming. What I'm saying is that if you are bound and determined to blanket your horse, at least don't see how many of the darn things you can own. They take up a lot of storage space, too.

All this said, my experience has been that no matter the facts, a lot of people are going to blanket their horses anyway because, well, just because.  And, mostly, that's fine – it certainly doesn't hurt them, unless they get their legs wrapped up in it (it happens).  And I won't criticize you at all, because I know you're doing it because you love your horse.

When it comes to blanketing your horses, it's mostly for you, not for them. And that's OK. Just don't forget to take his blanket off when the forecasted high temperature is 75 degrees F the next day.