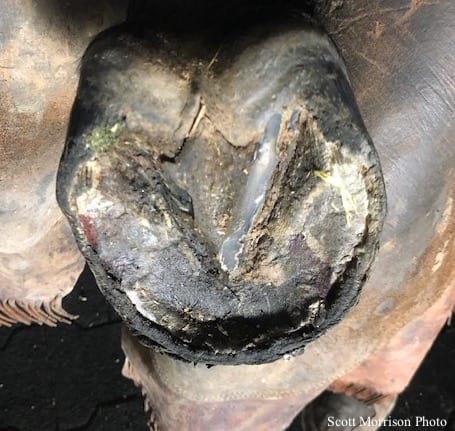 An example of a retracted sole

This year's wet weather and seemingly endless mud are wreaking havoc on horses' feet. Dr. Scott Morrison, head of the podiatry department at Rood & Riddle Equine Hospital in Lexington, Ky., said he has seen more cases of retracted soles this year than ever before. In addition to Kentucky, he is aware of cases in Virginia, Tennessee, and Indiana, and he suspects it is a problem in other parts of the country.

A retracted sole starts out with a thin sole. Then when the horse spends days or even weeks standing in mud while turned out, the sole weakens and the mud shoves it upward into the coffin bone, the main bone in the foot. This causes severe pain and lameness, eventually forming a large seroma (fluid-filled pocket) under the sole that can progress into a subsolar abscess or worse if untreated.

Horses with thin soles, predominantly Thoroughbreds, are most susceptible to retracted soles. Combine Kentucky's signature breed with its signature limestone-and-clay soil, and you have the perfect storm to create retracted soles.

“It seems like soil that is mixed with a lot of Class-I sand or fine gravel, like that around gates or water tanks, seems to be a big culprit,” Morrison said.

Class-I (pronounced “class-eye”) sand is a crushed-limestone product used to form a hard surface where horse traffic creates a mud hole. The crushed limestone starts out looking like cat litter, but when it absorbs water, it sets up almost like concrete. If the soil underneath the Class-I sand is largely field clay, the sticky mixture readily packs in the horses' feet and stays there.

“There are different areas of the world where it is wet all the time, such as Ireland and England, and they don't have this problem,” Morrison said. “There is a different kind of mud there. It doesn't really stick, like Kentucky mud mixed with clay does.”

Clay commonly is used as a therapeutic hoof packing, so why would a natural hoof packing of field clay create such a problem?

“The clay we use for poultices is soft clay and doesn't create a lot of pressure like the hard clay mixed with gravel and dirt, which becomes like concrete,” Morrison explained.

A turned-out horse with one or more retracted soles may come up lame suddenly, alarming its caretaker if it was fine the day before. The first thought is that the horse has an abscess in its foot. Subsolar seromas and subsolar abscesses are very painful because they involve the whole sole, so the horse does not have an area of the foot where it is comfortable to bear weight.

Horses with retracted soles in both front feet can be mistaken to have laminitis because the presentation is similar. Morrison said these horses often end up in his care because radiographs may not show anything until a week or 10 days later when the subsolar seroma is evident. In the meantime, if the farrier's efforts are unable to improve the horse, the owner may be concerned enough to seek help from a veterinary podiatrist.

Further confusing is that these horses walk better on a hard, flat surface, unlike most foot-lame horses that are more comfortable on a soft surface.

“They're worse when you walk them on the grass,” Morrison said. “Typically, when a horse comes in sore on both front feet, we put them in Soft-Ride boots for a couple of days, but these horses don't like any support on their soles. They want just flat, firm ground. If you put them in a stall, the shavings ball up in their feet, and they get sore. It works really well to just have the sole suspended off the ground and protected.”

Pain from a retracted sole can be sudden and acute, but proper treatment can achieve a similarly dramatic improvement, Morrison said.

“Once we know what the problem is and understand it, we usually open up the subsolar seroma or abscess and let it drain, then put a hospital plate on. They're usually sound the next day. It's dramatic,” he said.

Along with the hospital plate, Morrison uses a roller-motion shoe that mechanically helps the horse grow a thicker sole while it is healing. Most horses with retracted soles are sore predominantly in the front half of the foot. This enables Morrison to seal up the back of the hospital plate so no dirt or debris can get under the plate.

“We'll seal it up with a soft polyurethane, like Equi-Pak or something like that, so it will be less maintenance for the owner,” he said. “I typically don't put them on antibiotics unless they're not dramatically better the next day.”

Morrison said it typically takes two shoeing cycles (8 to 10 weeks total) for the horse to be able run barefoot or to return to regular shoes.

Retracted soles can be tricky to address, so be sure the horse's farrier is familiar with the condition. The retracted sole creates an optical illusion that the hoof wall is too long, and an inexperienced farrier may be inclined to trim it back too far, adding more pressure to the sole and worsening the problem.

Because a retracted sole causes severe pain, it is unlikely a horseman would allow it to go untreated. But, if neglected, a retracted sole could progress to osteomyelitis, an infection of the coffin bone that requires surgical intervention. Laminitis also is a threat when a horse spends a lot of time standing on the opposite limb while it is lame on the retracted sole.

After a horseman becomes familiar with retracted soles and learns to recognize the factors that cause them, prevention of more cases on the farm is relatively simple.

“This usually happens to horses that are living outside or are out a lot and they aren't getting their feet picked regularly,” Morrison said. “I'm pretty sure if you brought them into the barn once a day and picked out their feet and let their soles recover, it probably wouldn't be a problem.” Chew On This: Horses Make Eating Motions For A Variety Of Reasons