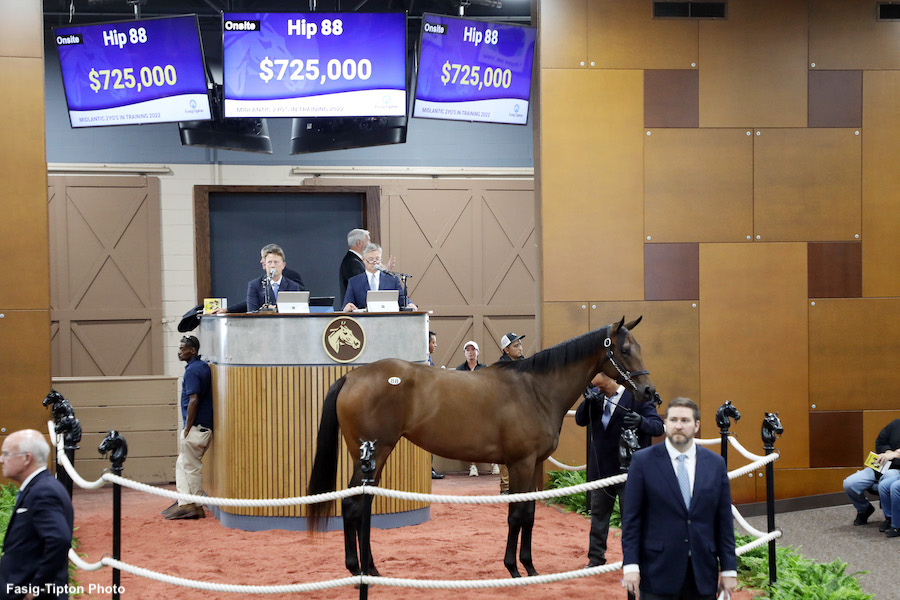 Five of the top 10 sold during the opening session were from their sire's first crop of 2-year-olds. The gross and average were comparable to last year's first session, while the median rose more than 11 percent over the same period.

Consigned as Hip 88 by Paul Sharp, agent, the bay filly worked an eighth in :10 1/5 during the Tuesday session of the under tack show (video). Dam Sweet Pistol (Smart Strike) has already produced a winning filly in Kirtan (Cairo Prince). Sweet Pistol is out of multiple Grade 2 winner Pomeroys Pistol, making her a half-sister to G2 Los Alamitos Futurity winner Thousand Words.

Hip 88 was bred in Kentucky by Brereton C. Jones. Bet Racing purchased the filly for $90,000 at last year's Fasig-Tipton July Sale, where she was consigned by her breeder as Airdrie Stud.

Popular first-crop sire Bolt d'Oro was responsible for the session's top colt, which sold for $675,000 to Spendthrift Farm and Frank Fletcher Racing (video).

Offered as Hip 30 by Pike Racing, agent, the bay colt worked an eighth in 10.0 during the Tuesday session of the under tack show (video). Hip 30 is out of the stakes placed Aldebaran mare Shine Softly, making him a half-brother to six winners from as many to race, including stakes winner The Grass Is Blue (Broken Vow). The second dam is Breeders' Cup winner and multiple Grade 1 winning millionaire Soaring Softly.

Rounding out the top five prices of the session were:

The sale continues tomorrow at 11 a.m. Results are available online.