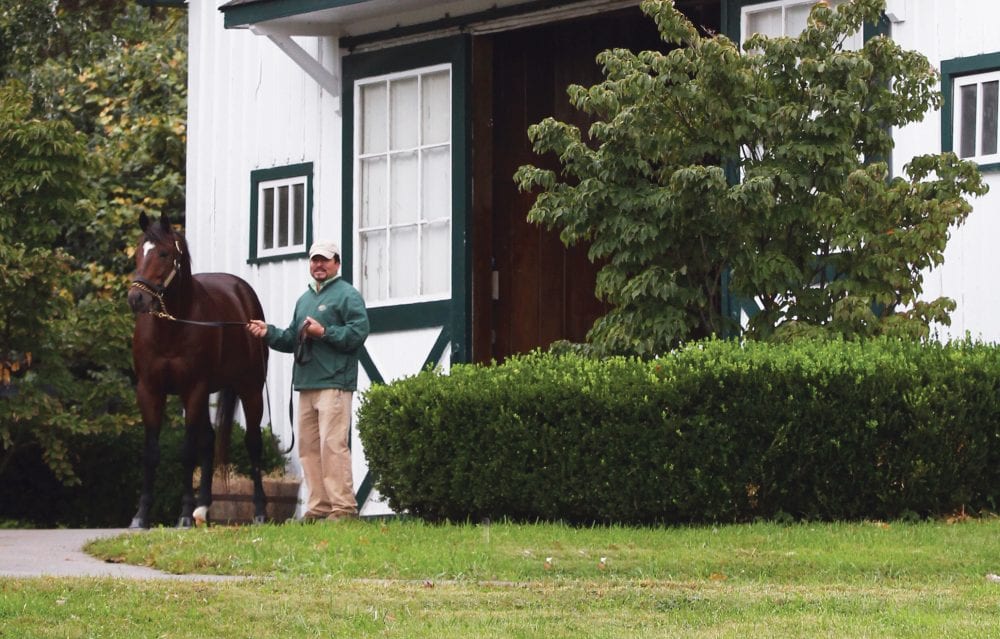 In “Making Claims,” Paulick Report bloodstock editor Joe Nevills shares his opinions on the Thoroughbred industry from the breeding and sales arenas to the racing world and beyond.

A few years ago, I posed a question on social media that got quite a bit of participation from folks in the bloodstock sphere: Let's say you've just opened up a new stud farm in Kentucky, and you're allowed to “expansion draft” three stallions from other North American states or provinces to start your own roster. Who do you take and why?

It was fun to see the varied responses and justifications for their rosters, but I never ended up giving my own list. Time to do something about that.

Of course, any list like this is going to be highly subjective, and will vary based on how seriously you take it. If you're just making a list of the best regional stallions, then a horse with a deep and proven resume like Sequel New York's Freud is a no-brainer.

However, if you're drafting as if you're actually going to stand the stallions and try to make a living off it, taking a stallion in his age bracket to start a new farm would be quite the risk, operating under the assumption that the 24-year-old only has a handful of years left in service compared with one just getting started.

This list will resemble the latter. I'm going to attempt to draft a roster of five current, active North American stallions standing in states or provinces outside of Kentucky that would attract immediate attention from breeders, while also setting up my business to succeed for years to come.

For the purposes of simplicity, real-life factors such as cost, contracts, or the politics of the horse racing business will not be taken into account. If I want a stallion, I get it. I'm sure the farm would be compensated fairly.

Second, I'll be drafting by position, just like any fantasy draft. Here are the slots I'll look to fill:

1) The Veteran: A stallion who has been active for five or more years. They have at least a few crops at the track, and are a proven commodity. The cornerstone of this new operation.
2) The Freshman Sire: A member of this year's freshman class, whose first foals are 2-year-olds of 2022. This is the heatseeker of the group.
3) The Prospect: A stallion who stood his first season at stud in 2021 or 2022, with their oldest foals being weanlings at the most. The future of the farm rests with this one.
4) The Turf Stallion: Self-explanatory. Can come from any age bracket.
5) The Value Play: A stallion in any age bracket who stood for an advertised fee of $3,500 or less in 2022.

There may be no stallion outside of Kentucky right now that I trust more than Central Banker. All he does is get winners amongst arguably the most competitive state-bred scene in the country.

Central Banker is New York's leading sire by general earnings through Aug. 24, with $3.2 million, well ahead of second-place War Dancer with $1.9 million. Nearly two-thirds of his 202 lifetime starters are winners, and he's proven that he can get a graded stakes-level performer, with seven-figure earner Bankit. Horses like Bank On Shea have also gotten notable stakes wins outside of New York, so you know Central Banker's not just a state-bred star.

From a commercial standpoint, Central Banker is a son of Speightstown, and that's one of those names where every serious farm is trying to get a son on their stallion roster. Bringing a proven one into Kentucky with plenty of gas left in his tank would set a solid foundation for my roster.

This was going to be the easiest category for me to pick: Girvin was lighting the world on fire from Florida, and was an obvious choice to bring to Kentucky. As it turns out, Airdrie Stud had the same idea, and recently announced that he'd been moved to the Bluegrass State to stand in 2023 and beyond.

Fortunately, there are other strong candidates still on the board.

I'm staying in Florida for my freshman pick, and going with Bucchero. He got a ton of mare support in his early seasons at Pleasant Acres Stallions, and that'll give me plenty of opportunities to market his successful runners while I wait for my books of mares to take over.

What I like about Bucchero is that he's displayed incredible versatility in practically every aspect of his career. Though he was best known as a turf sprinter during his on-track career, he was also extremely proven going a route of ground on the dirt. His sire, Kantharos, has also been diverse in his success with runners, which suggests a breeder could send just about any type of mare to Bucchero and have an honest chance at a runner.

That versatility has also been impressed on his first runners. He's had winners at Gulfstream Park, Monmouth Park, Lone Star Park, and Horseshoe Indianapolis, and he's had stakes-placed runners at Gulfstream and Prairie Meadows. Toddchero probably would have won any other running of the Prairie Gold Juvenile Stakes in Iowa, but the winner, Tyler's Tribe, looks like a Breeders' Cup-level buzzsaw. No shame there.

There is a great deal of value in having a stallion where if a breeder asks, “will my mare work with him?” the answer is always “yes.” At this stage of the game, Bucchero seems like that type.

The market demands Into Mischief right now, and I'd be crazy not to give it to them. Honest Mischief might be the best option to do that outside of Kentucky.

New York breeders have turned up in droves to send their mares to Honest Mischief during his first two seasons at stud, so he'd have a strong pipeline of foals to hopefully build his resume and create demand while we wait for his foals under my purview to arrive.

In the meantime, he cuts a lovely figure, and he's got the backing of one of the taproot Juddmonte Farms families. He's a half-brother to Grade 1 winner and established sire First Defence, and his second dam is the 2002 Broodmare of the Year Toussaud, which puts him on a direct line to Empire Maker and Chester House.

Honest Mischief is on the path to be a top sire in New York for a long time. That is, unless I take him to Kentucky first.

This stallion took the North American turf by storm to such a degree, they brought him stateside. Now, I'll take him to Kentucky.

Before he's even had a domestic-sired runner hit the track, Sir Prancealot has had three runners win graded stakes races in the U.S., and another finish third in the Breeders' Cup Juvenile Fillies Turf. The American commercial market still frustratingly turns its nose up at turf pedigrees, but the possibilities of what Sir Prancealot could do in this country with a full book of mares catered toward winning races at tracks like Kentucky Downs is positively salivating.

What makes Sir Prancealot especially enticing is he's not just a few graded stakes horses and a cloud of dust. Half of his total 329 foals of racing age are winners, and if you're only counting winners from starters, that number goes up to 64 percent.

The only thing that might stall some uncreative breeders is his lack of immediately recognizable North American names in his immediate pedigree that pop an auction page, but the on-track results should be more than enough to attract the ones that know what they're doing.

Kentucky's got an empty throne to fill following the death of Kitten's Joy, the king of American turf sires. With careful management (by my very qualified pretend staff), Sir Prancealot could become an able contender.

My pretend farm might be based in Kentucky, but I've still got my eye out for the regional breeders with a low-cost option. For an A.P. Indy-line stallion who is capable of getting you a graded stakes horse the likes of Army Mule and Call Paul, a stud fee double his current $2,500 asking price would be plenty attractive.

Over half of his 282 lifetime horses of racing age are winners, and a whopping 70 percent of his total starters are winners. At that price point, making money on the racetrack or in the sale ring seems very achievable.

For a horse that went off as the favorite in the 2009 Kentucky Derby, I was pretty surprised when he didn't start his career in Kentucky. If I have my pick of stallions, I'd give him a chance to make a go of it.

First Foal Is A Filly For California Stallion Cistron