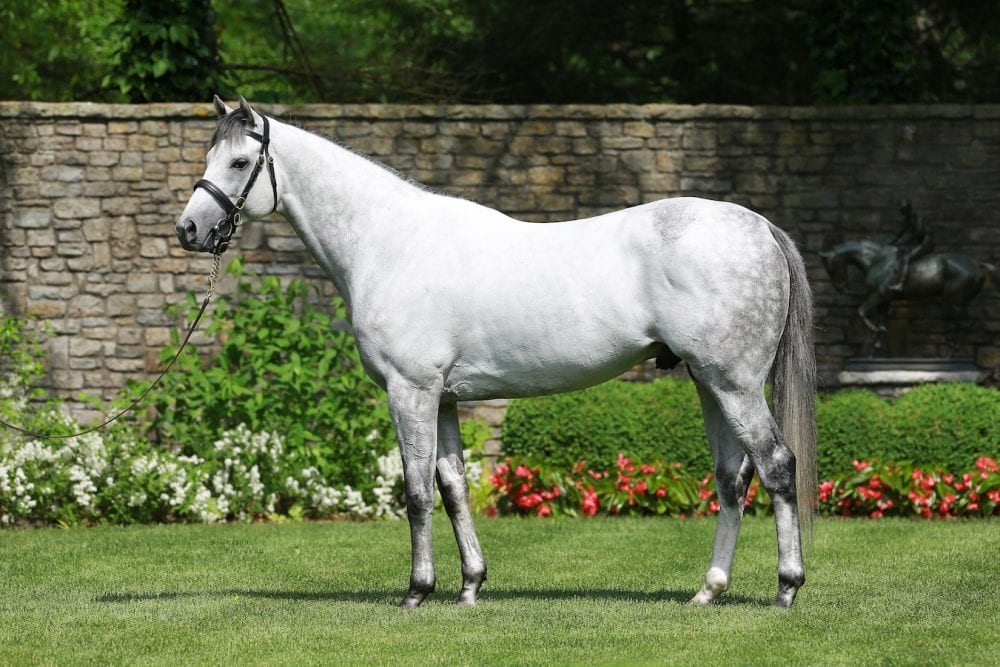 There is no limit on methods to slice and dice the sire lists to prove one is better than their peers, but few of them are attainable unless a stallion gets mares during the breeding season.

Commercial stud farms make their money by getting mares in the books of their rosters and producing foals. For those farms, everything that happens on the racetrack or in the sales ring is in service of the ultimate goal: Getting breeders to send them more mares and pay stud fees.

Every year in late October, The Jockey Club Report of Mares Bred makes public how successful each farm and individual stallion was at generating interest from breeders, giving us an economy-driven approval poll for every horse at stud. If breeders believe a potential foal will fit their plans, if the mating makes sense geographically, and if the stud fee is priced appropriately, they will send the mare to be bred. If one or more of those criteria are not met, the mare will go to a better-fitting stallion.

With that in mind, there are few better indicators that a stallion's fortunes are trending upward than a year-to-year boost in mares bred. For breeders to increase their investment in a stallion en masse, whatever factor merited the boost must have been enduring.

Of course, not every stallion's number of mares bred is created equal. Some stallions' books are capped by their farms to minimize wear and tear. Deals are made. Stallion seasons are donated. Stallion owners breed their own mares. If a stallion has 100 reported mares bred, that does not mean he generated 100 paying customers.

Regardless, if the number of mares bred is up, business is probably good for a stallion and a farm. Following is a list of the stallions who saw the biggest jumps in mares bred in 2022.

The biggest upward shift of 2022 came from Ashford Stud resident Cupid, whose book rose by 97 mares to 174.

The Grade 1-winning son of Tapit's dramatic growth in popularity came after the success of his first crop of foals, which were 2-year-olds of 2021 and hit the Kentucky Derby and Oaks trail this past spring.

His freshman crop was led by God of Love, who earned the Sovereign Award as Canada's champion 2-year-old male after victories in the Grade 3 Grey Stakes and the Cup and Saucer Stakes, both at Woodbine.

Cupid's stock continued to rise in the early months of the 2022 breeding season with the success of Desert Dawn, an Arizona-bred who ran in the 2021 Breeders' Cup Juvenile Fillies, then made noise on the Kentucky Oaks trail with a victory in the G2 Santa Anita Oaks. She went on to finish third in the Kentucky Oaks, just a half-length off runner-up Nest, and she has continued to run well against graded stakes company on the West Coast throughout the summer.

On the East Coast, Cupid's runners were led in early 2022 by Sterling Silver, who started the year with a victory in the Franklin Square Stakes at Aqueduct.

In the months after the breeding shed closed for the season, Duke of Love gave Cupid one of his biggest victories to date, when he won the Prince of Wales Stakes at Fort Erie, the second leg of the Canadian Triple Crown.

While racetrack success certainly helped drive commerce for Cupid in 2022, it appears he was also helped by careful stud fee management by Ashford Stud. Among the top 15 members of the 2021 freshman sire list by earnings, Cupid tied with Maryland resident Divining Rod for the lowest 2022 advertised fee at $5,000.

Pairing Cupid's level of success with a low entry price appears to have resonated with breeders.

Following an underwhelming freshman season, Runhappy had one of the most dramatic turnarounds of the North American stallion ranks in 2021, and that led to an 88-mare increase for the 2022 breeding season.

Claiborne Farm's Walker Hancock said the improved performance in year two, and the ensuing spike in mares bred, were partially the result of lessons learned during Runhappy's freshman season. The biggest one involved a promotion offering a $100,000 bonus to first-crop maiden winners by Runhappy at major North American summer meets.

With the benefit of hindsight, Hancock said the promotion probably forced several talented Runhappy runners out of their element.

“His first crop was, to be blunt, not what we were expecting,” Hancock said. “There are a lot of factors that went into it. COVID, hurt a lot, I think. The bonus at Saratoga, Del Mar, and Kentucky Downs made people push them to get the bonus, which I don't think they want to be pushed. They have to come into their own, and we've seen they get better as they get older. We found if you finished third at Monmouth first time out, then the owner said, 'Let's try and get a bonus at Saratoga and go there.' As opposed to just running them back at Monmouth where they could win, they'd run in Saratoga and run fifth, so he had very few winners.

“They just need a little time, but they've picked back up,” Hancock continued. “We even raised his stud fee because we've had a lot of early interest, and he's had a good year for himself. I think from here on out, everything will hopefully be upward-trending.”

Runhappy's resurgence was led by the one-two punch of Following Sea and Smile Happy, each from different crops.

Following Sea, a member of Runhappy's first crop who went unraced at two, won the Grade 2 Vosburgh Stakes, and showed his versatility with in-the-money efforts in the G1 Haskell Stakes around two turns, and the Breeders' Cup Sprint and G1 Cigar Mile Handicap against older foes around one turn.

Smile Happy, from Runhappy's second crop, won the G2 Kentucky Jockey Club Stakes as a juvenile, then came back to have a big presence on this year's Kentucky Derby trail with runner-up efforts in the G2 Risen Star Stakes and G1 Blue Grass Stakes, before finishing eighth in the Kentucky Derby itself.

While the first two stallions on the list were examples of horses with mid-sized books graduating to bigger things, Gun Runner's ascent was a rocket into the stratosphere of the stallion ranks.

After a record-setting freshman season in 2021, and continued success on the Triple Crown trail the following spring, the resident of Three Chimneys Farm bred more mares than any other North American stallion in 2022, growing his book by 80 mares from 168 in 2021 to 248 this season.

The son of Candy Ride has rapidly placed himself among the surest commodities among auction sires, and his first two crops of runners have already annexed several of the top races in their age brackets.

Last year's debut class was led by Echo Zulu, who was named champion 2-year-old filly after a convincing campaign featuring victories in the G1 Spinaway Stakes, the G1 Frizette Stakes, and the Breeders' Cup Juvenile Fillies. Gun Runner finished the year with the all-time record for freshman sire earnings, and he led his class in every significant category, often by a wide margin.

Lane's End resident Connect was another stallion who saw breeders come back after a strong freshman season, growing his book by 79 mares, from 93 to 172.

The son of Curlin was third on the 2021 freshman sire list by progeny earnings, led by Grade 1 winner Rattle N Roll and Grade 3 winner Hidden Connection.

“Breeders are very fickle, and it's always 'What have you done for me lately?' and he's gotten off to a great start,” said Bill Farish of Lane's End. “Hopefully that'll continue. You've got to keep getting the results, and we're certainly expecting him to do that.”

“It takes us all a while to figure out what body type and what pedigrees work best with him,” he continued. “Once people start to figure that out, they get more confident in breeding to him.”

Rounding out the top five was Upstart, whose second crop of runners took a step forward in the early part of the year, and helped their sire's book grow by 74 mares, from 77 to 151.

Upstart, a son of Flatter that stands at Airdrie Stud, had high-level contenders in both this year's Kentucky Derby and Kentucky Oaks.

Zandon emerged as a top-shelf Derby contender following a win in the Grade 1 Blue Grass Stakes, which he parlayed into a third in the Derby. Kathleen O. has won four of five starts, including Grade 2 scores in the Gulfstream Park Oaks and Davona Dale Stakes.

“He had a pretty remarkable 3-year-old crop this year when you consider he was bred at just a $10,000 stud fee,” said Airdrie Stud's Bret Jones. “He'd been a bit unlucky a the year before with Reinvestment Risk, who's now run second in four Grade 1 races and has been chasing Jackie's Warrior around the country.

“With the resume he's built right now, coming off those more modest stud fees, people really take notice of that,” Jones continued. “When people see stallions improving their mares to the degree that he has, it gets people excited. He caught a real flyer this year, and we anticipate more of the same this season.”