California Chrome LLC's California Chrome and Juddmonte Farms' Arrogate are the top two morning line favorites in a field of 10 3-year-olds and up set for Saturday's $6 million Breeders' Cup Classic (G1), the climax of the 33rd Breeders' Cup World Championship races to be run Friday and Saturday (Nov. 4-5) at Santa Anita.

The 1 ¼-mile Classic  is the richest of 13 Championship races worth $28.5 million in purses and awards to be run over the two days at Santa Anita and will be televised live by NBCSN and NBC. The Classic will be broadcast live at 8:35 p.m. ET on NBC (8-9 p.m. ET).

Trained by Art Sherman, California Chrome is undefeated in six starts this year and has pushed his career bankroll to more than $13.4 million. Third in the Classic at Santa Anita in 2014, California Chrome is the even-money morning line favorite and will break from post position four under Victor Espinoza.

“I'd rather be outside, but '4' will be good,” said Espinoza. “As long as California Chrome is ready, I should be able to move out of there quick.”

Second on the morning line at 5-2 is the Bob Baffert-trained Arrogate.

A winner of his past four starts, Arrogate exploded onto the national racing scene with a 13 ½-length victory in the Travers (G1) in his most recent start August 27. Mike Smith will be aboard the lone 3-year-old in the race and break from post position 10.

Baffert, who won last year's Classic with Triple Crown winner American Pharoah and the 2014 Classic with Bayern, will have a second starter in the race in Mike Pegram, Karl Watson and Paul Weitman's Hoppertunity. Winner of the Jockey Club Gold Cup (G1) in his most recent starter and earner of more than $3.5 million, Hoppertunity will break from post position nine and be ridden by John Velazquez. Hoppertunity is 15-1 on the morning line.

“I never like any draw until after I win,” said Baffert. “But it's all right. A lot will depend on the break (for Arrogate especially). But it's a long run to the turn and it'll get sorted out. At least we're not in the No. 1 where if they don't break someone will shut them off. I didn't want to be in the No.1 hole with all those horses on top of you. But it's all up to Mike Smith and John Velazquez.”

Here is the full field (with morning-line odds) for the $6 million Breeders' Cup Classic:

Four Championship races will be run Friday, highlighted by the $2 million Longines Breeders' Cup Distaff for fillies and mares at 1 1/8 miles and featuring champions Beholder, Songbird and Stellar Wind in a field of eight.

Favored at 6-5 is Fox Hill Farms' undefeated Songbird, winner of 11 straight including last year's 14 Hands Winery Breeders' Cup Juvenile Fillies as one of her seven Grade 1 triumphs, will be facing older fillies and mares for the first time in her career.

The Jerry Hollendorfer trainee will break from post position one and be ridden by Mike Smith, who leads all jockeys with 22 Breeders' Cup victories.

“She just jumps away from the gate so quickly, that drawing the rail really should have no effect on her.,” said Smith. “I think she's the natural speed in the race to start with. It's pretty straight forward.”

Spendthrift Farm's Beholder, a two-time Breeders' Cup winner with triumphs at Santa Anita in the 2012 Juvenile Fillies and 2013 Distaff, has been second in her past three starts. She was runner-up to Classic favorite California Chrome in the TVG Pacific Classic (G1) at Del Mar and twice to Stellar Wind in the Clement L. Hirsch (G1) at Del Mar and in the Zenyatta (G1) at Santa Anita five weeks ago.

Beholder, the co-second choice at 5-2 is trained by Richard Mandella and will be ridden by Gary Stevens and break from post position eight.

“With Beholder, it's nice to get off the rail,” said trainer Richard Mandella, “but I am a bigger believer in good luck and a good post; so we are hoping for good luck.”

Hronis Racing's Stellar Wind, second in the Distaff last year at Keeneland to Stopchargingmaria, is trained by John Sadler. Listed at 5-2 on the morning line, Stellar Wind will be ridden by Victor Espinoza and break from post position five.

“Stellar Wind, she's doing great and the post position is great,” Espinoza said. “I really like my chances. (Is it a disadvantage for undefeated Songbird in Post Position No. 1?) Yes and no. I like it because I want to win, but sometimes it doesn't matter the post position if the horse is so good on the day of the race.”

Here is the full field (with morning-line odds) for the $2 million Breeders' Cup Distaff:

**Beholder's morning line odds were incorrectly announced by Laffit Pincay as 5-1, should have been 5-2.**

In Saturday's $2 million Breeders' Cup Mile (G1), Robert Masterson's Tepin will attempt to beat the boys for the second consecutive year. Never worse than second in her past 14 starts, Tepin had her eight-race win streak snapped by Mile rival Photo Call (IRE) in the First Lady (G1) at Keeneland four weeks ago.

Listed at 3-1 on the morning line, Tepin is trained by Mark Casse and will be ridden by Julien Leparoux from post position eight. 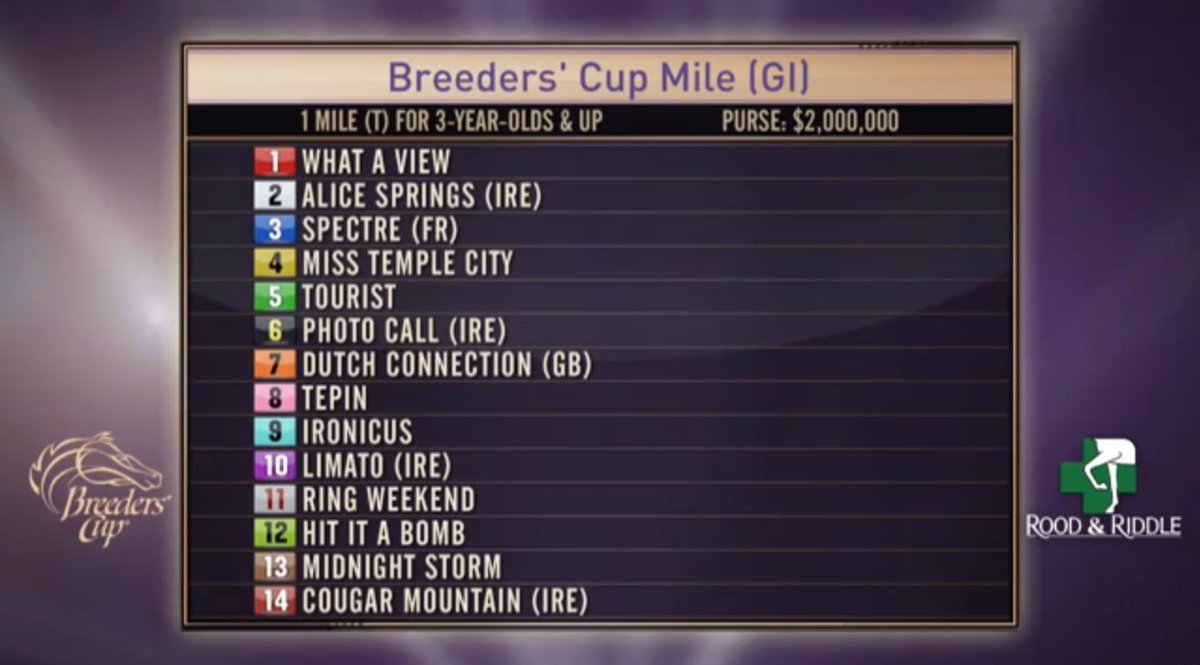 Owned by Juddmonte Farms, Flintshire was second in the 2014 Breeders' Cup Turf at Santa Anita. Since coming to the United States and into the barn at Chad Brown, Flintshire has won three of four starts. Javier Castellano has the mount Saturday on the 5-2 morning line favorite and will break from post position four.

Found, who upset Golden Horn to win last year's Turf at Keeneland, comes to Santa Anita off a second-place finish October 15 in the Champion Stakes (Group 1) at Ascot after having taken the Prix  de l'Arc de Triomphe (Group 1) 13 days before. Ryan Moore, who was aboard for the victory at Keeneland, has the mount Saturday and will break from post position 10.

Found is owned by the partnership of Michael Tabor, Derrick Smith and Mrs. John Magnier, also owners of Highland Reel (IRE), the runner-up to Found in the Arc de Triomphe. Listed at 3-1 on the morning line as is Found, Highland Reel will break from post position 12 and be ridden by Seamus Heffernan. 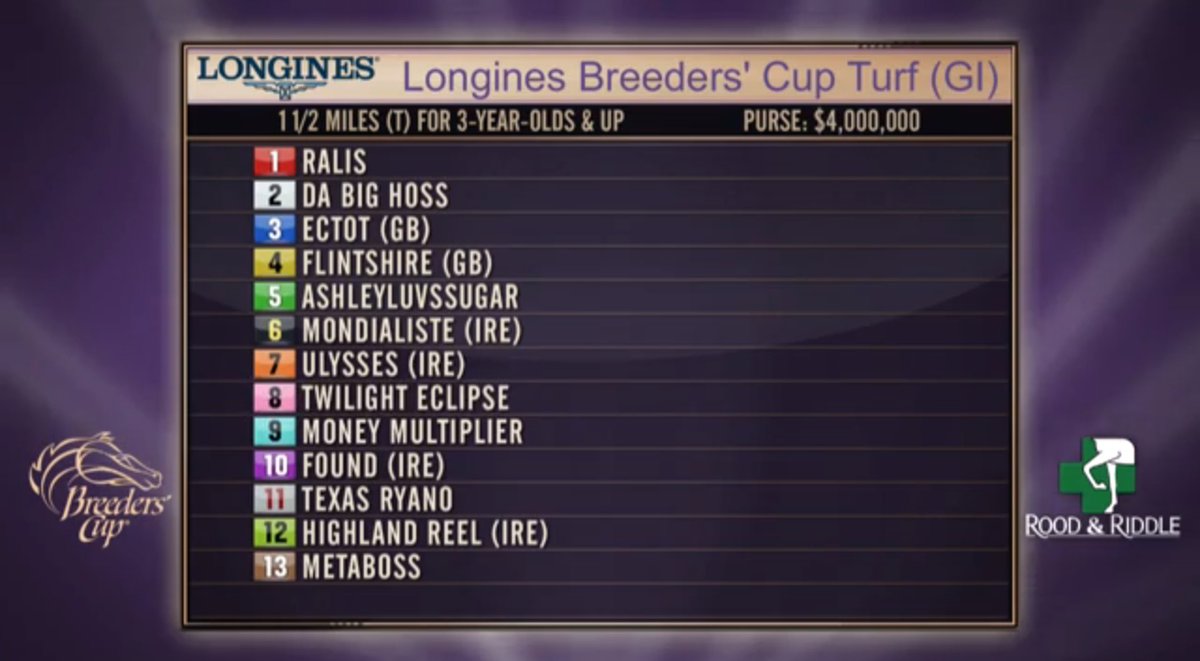 The feel-good story of these Championships resides in the $2 million Breeders' Cup Filly & Mare Turf (G1) in which Sheep Pond Partners' Lady Eli will go for her second Breeders' Cup victory.

Trained by Chad Brown, the winner of the 2014 Juvenile Fillies Turf has battled back from a life-threatening fight with laminitis to make it to Santa Anita. Second in the Ballston Spa (G2) in her first start in more than a year, Lady Eli won the Flower Bowl Invitational (G1) in her most recent start.

Listed as the 5-2 favorite on the morning line in the field of 13 for the 1 ¼-mile race, Lady Eli will break from post position eight and be ridden by Irad Ortiz Jr. 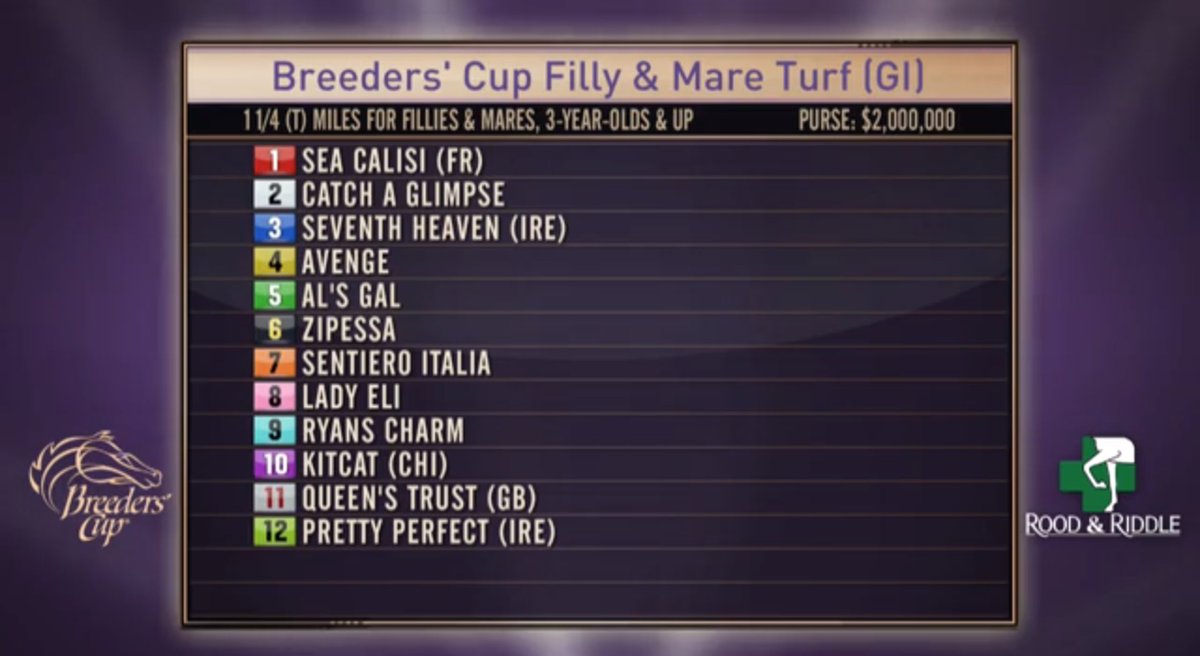 The Albaugh Family Stable's Not This Time, an 8 ¾-length winner of the Iroquois (G3) at Churchill Downs in his most recent start, is the 7-2 morning line favorite in a field of 11 for the Juvenile. Trained by Dale Romans, Not This Time will break from post position 10 and be ridden by Robby Albarado. 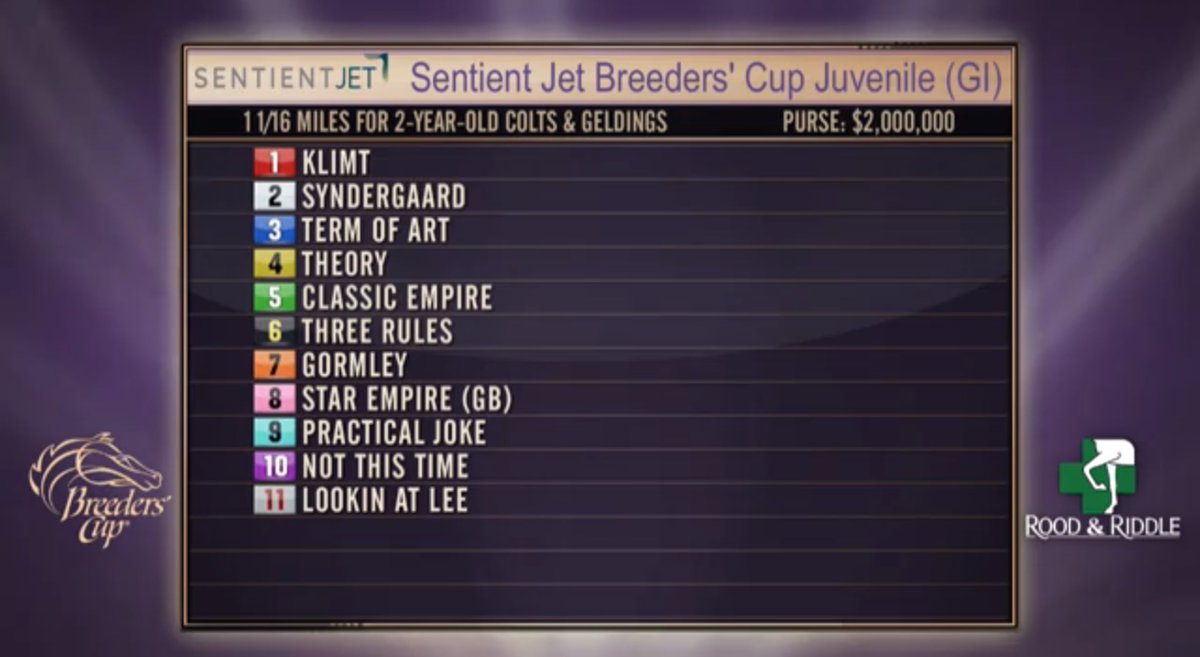 Speedway Stable's Noted and Quoted, winner of the Chandelier (G1) at Santa Anita on October 1, is the 9-2 morning favorite for the Juvenile Fillies that attracted a field of 12. Trained by Bob Baffert, Noted and Quoted will break from post position 10 and be ridden by Rafael Bejarano. 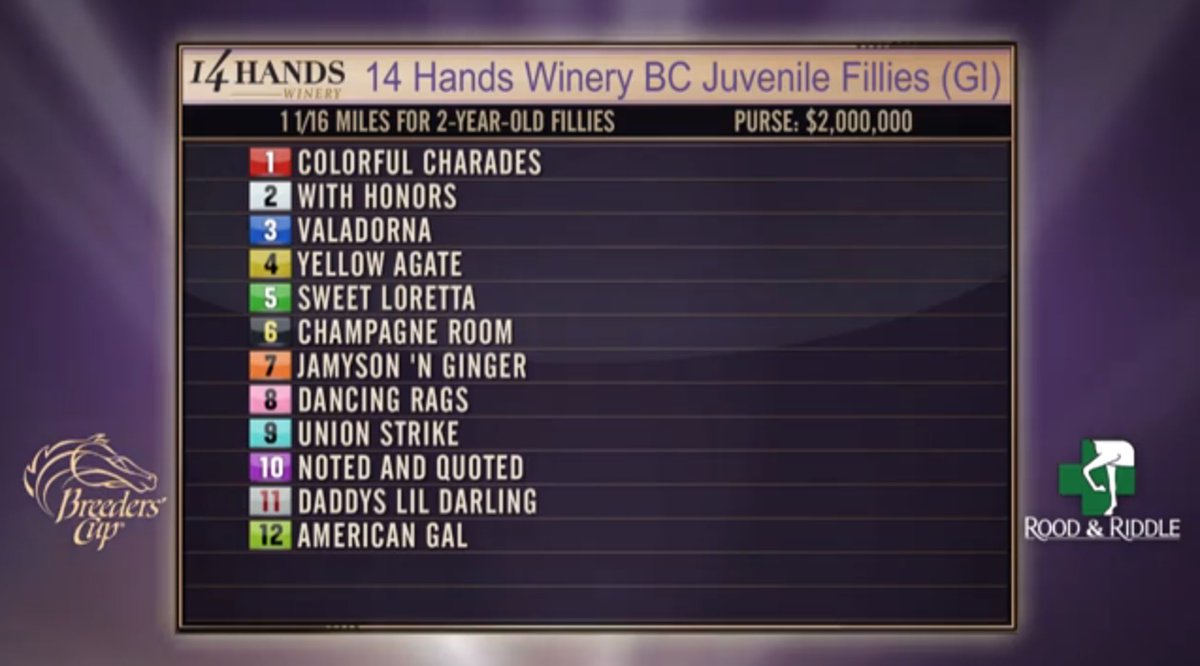 All three runners are perfect in 2016: A. P. Indian going 6-for-6 in the East, Masochistic going 2-for-2 and Lord Nelson going 4-for-4 in Southern California with three of those victories coming at Santa Anita. 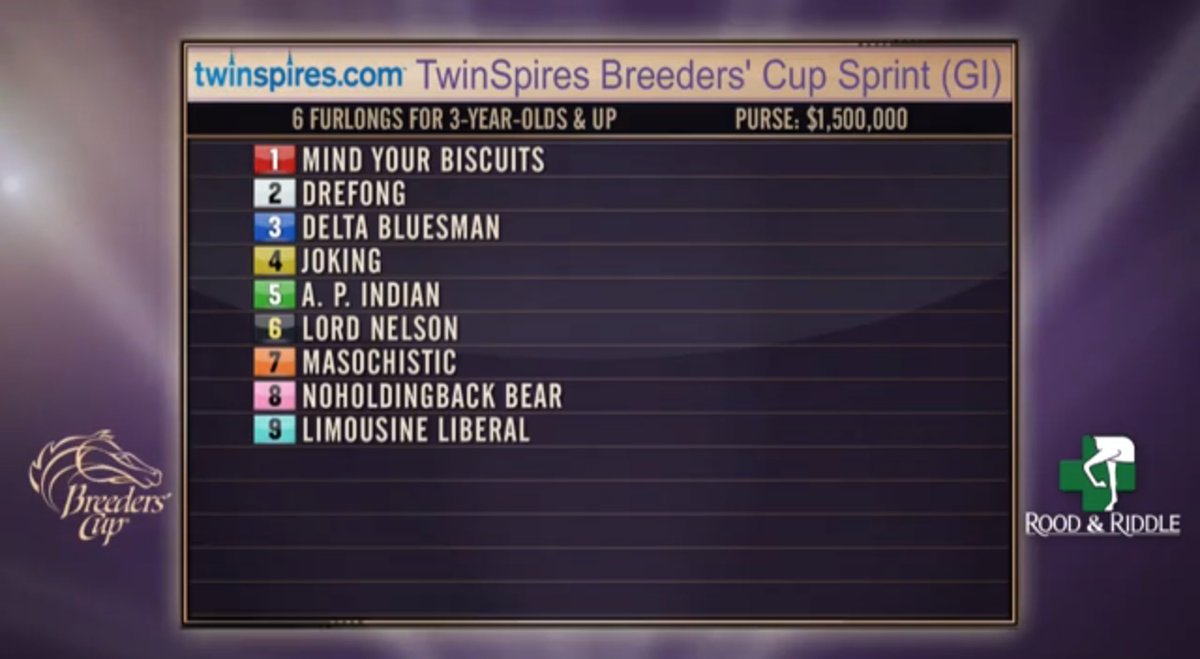 Two defending champions will be in action in Saturday's other sprints: Michael Dubb, David Simon, Head of Plains Partners and Bethlehem Stables' Wavell Avenue in the $1 million  Breeders' Cup Filly & Mare Sprint (G1) and Mongolian Stable's Mongolian Saturday in the $1 million Breeders' Cup Turf Sprint (G1). However neither runner is favored to repeat.

In the Filly & Mare Sprint, Gary Barber and Sequel Racing's Haveyougoneaway, winner of three consecutive starts, is the 3-1 morning line favorite in the field of 13. Trained by Tom Morley, Haveyougoineaway will be ridden by John Velazquez and break from post position two.

Trained by Chad Brown, Wavell Avenue has won one of six starts this year and most recently was third to Saturday rival Paulassilverlining in the mud at Belmont in the Gallant Bloom (G2). Listed at 6-1 on the morning line, Wavell Avenue will be ridden by Joel Rosario and break from post position 10. 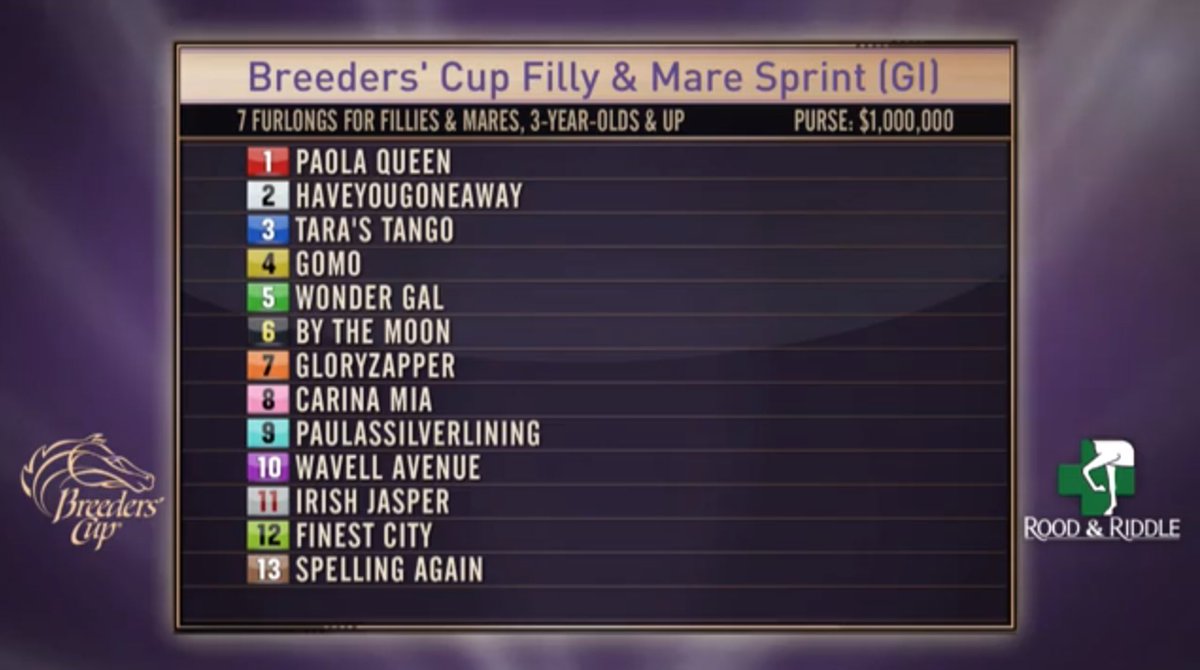 Patricia Generazio's Pure Sensation, a winner of three consecutive starts, is 5-1 the morning line favorite in a race that drew 16 entries. Trained by Christophe Clement, Pure Sensation will break from post position one and be ridden by Kendrick Carmouche.

Mongolian Saturday, who snapped a four-race skid with a victory in the Woodford (G3) at Keeneland in his most recent start, is 12-1 on the morning line. Trained by Enebish Ganbat, Mongolian Saturday will break from post position three and be ridden by Carlos Montalvo. 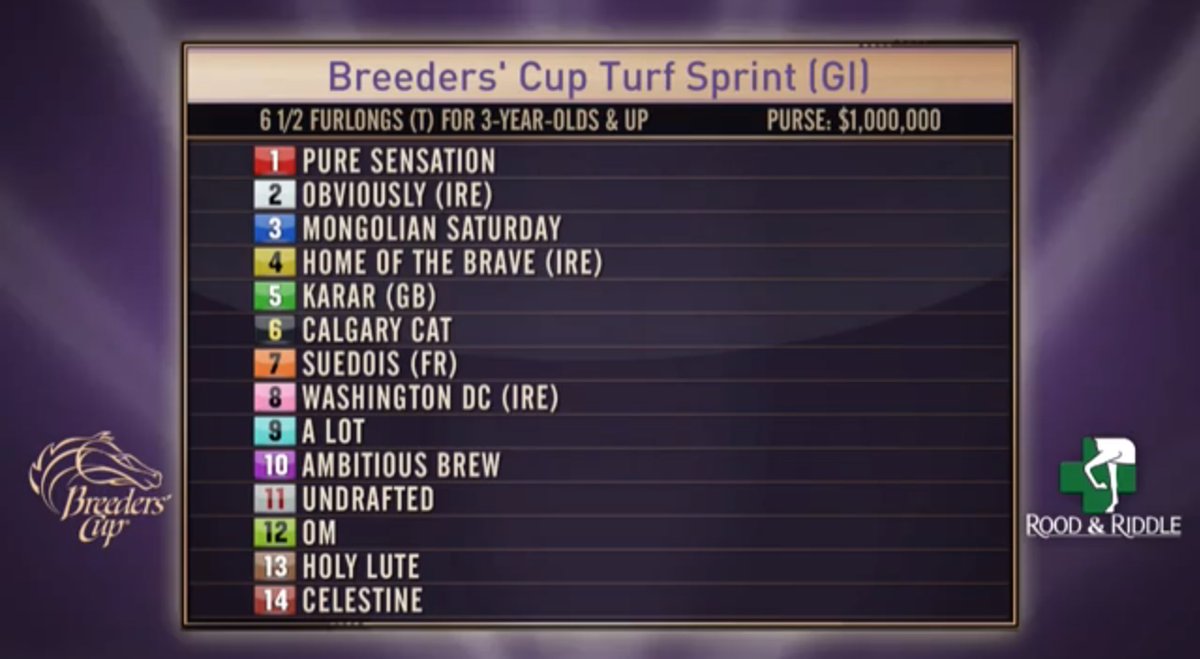 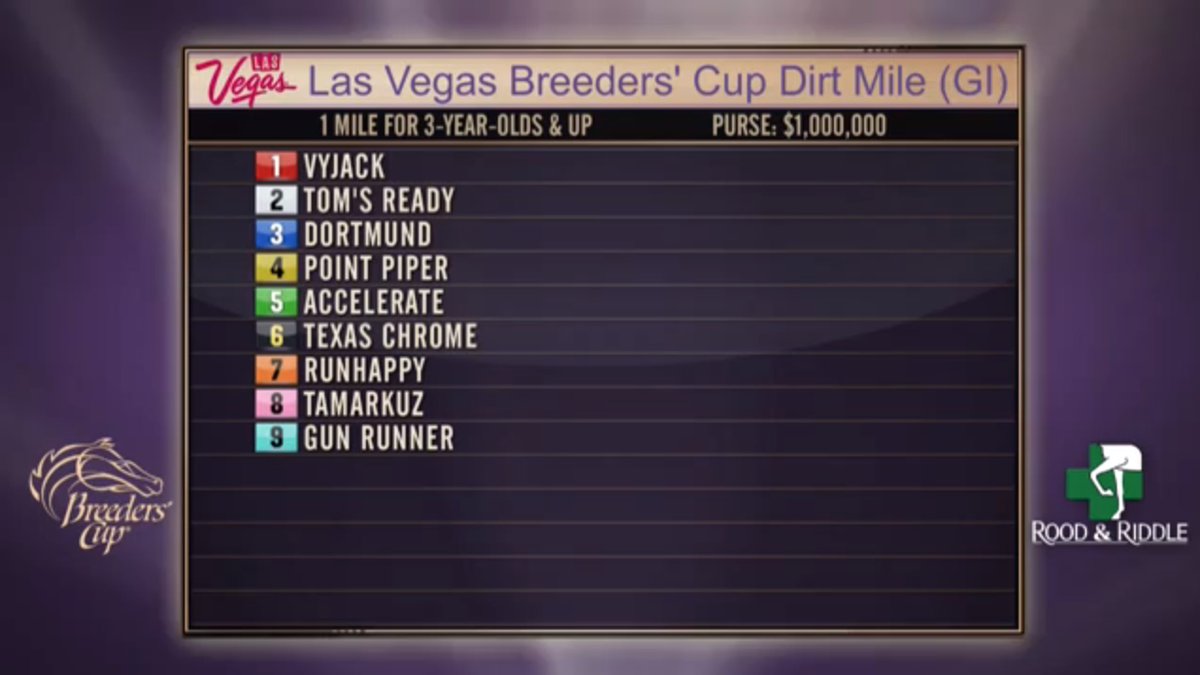 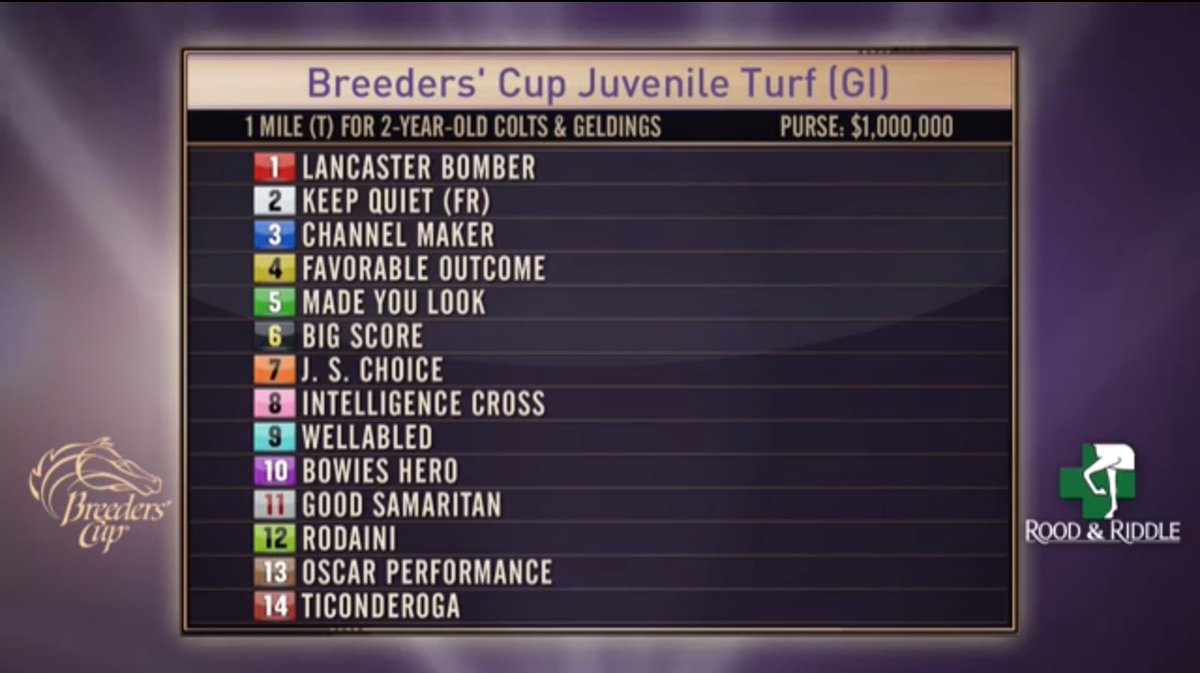 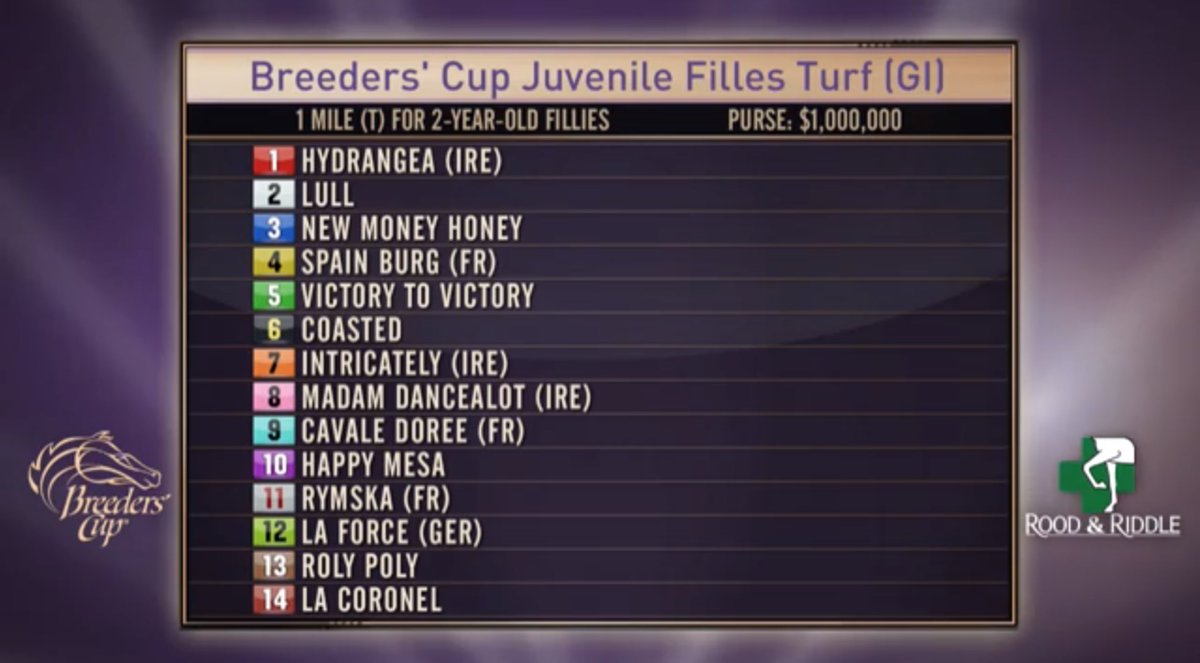