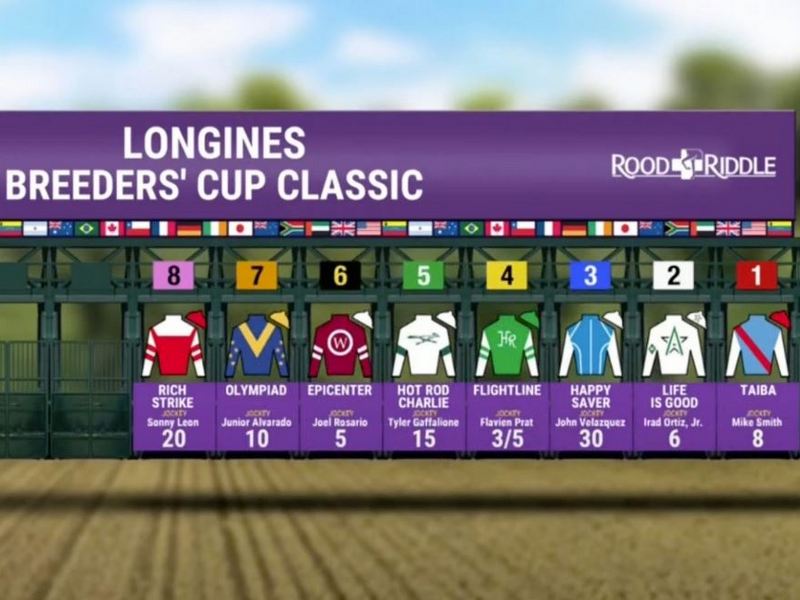 Undefeated and unchallenged superstar Flightline has drawn post four for this Saturday's $6 million Breeders' Cup Classic, near the center of the eight-strong field for the 1 1/4-mile contest. The 4-year-old son of Tapit was listed at 3-5 on the morning line and will be handled by regular rider Flavien Prat on behalf of trainer John Sadler.

Overall, Flightline has won his five starts by a combined 62 ¾ lengths. Sadler has masterfully coordinated the colt's campaign through a number of setbacks, including a quarter crack before the start of last year's Del Mar meet and bone bruising in a hock earlier this year, but the trainer believes Flightline is more than ready for the challenge that awaits him at Keeneland.

“Ever since the Pacific Classic everything has gone really well,” Sadler said. “The timing of this race is closer than his last two starts, so we've been training him up for it, and everything's going really well.

“It was a great thrill Saturday when he had his last workout, and you saw two or three thousand people out there in the dark to watch him.”

Hall of Famer Steve Asmussen will saddle the second choice in Epicenter, leaving from stall six with morning-line odds of 5-1. The 3-year-old son of Not This Time was second in both the Kentucky Derby and Preakness Stakes, and enters the Classic off a win in the Grade 1 Travers.

“We're all excited to see how we measure up,” Asmussen said.

Fellow Hall of Fame trainer Todd Pletcher will send out two in the Classic, with Life Is Good listed as the third choice at 6-1 from post two and Happy Saver listed at 30-1 from post three.

“Going a mile and a quarter is plenty of time to get position, and kind of play things off the break,” Pletcher said of his two chances' post draws.

“It's a real privilege to be here with all these guys in a race of this stature,” said trainer Eric Reed. “It's been a dream come true… it's worked before from the outside!”

In total, 177 horses from seven countries were entered in this year's Breeders' Cup World Championships.

Among the other exciting entries in this year's event are:

The fields are listed below in post position order: