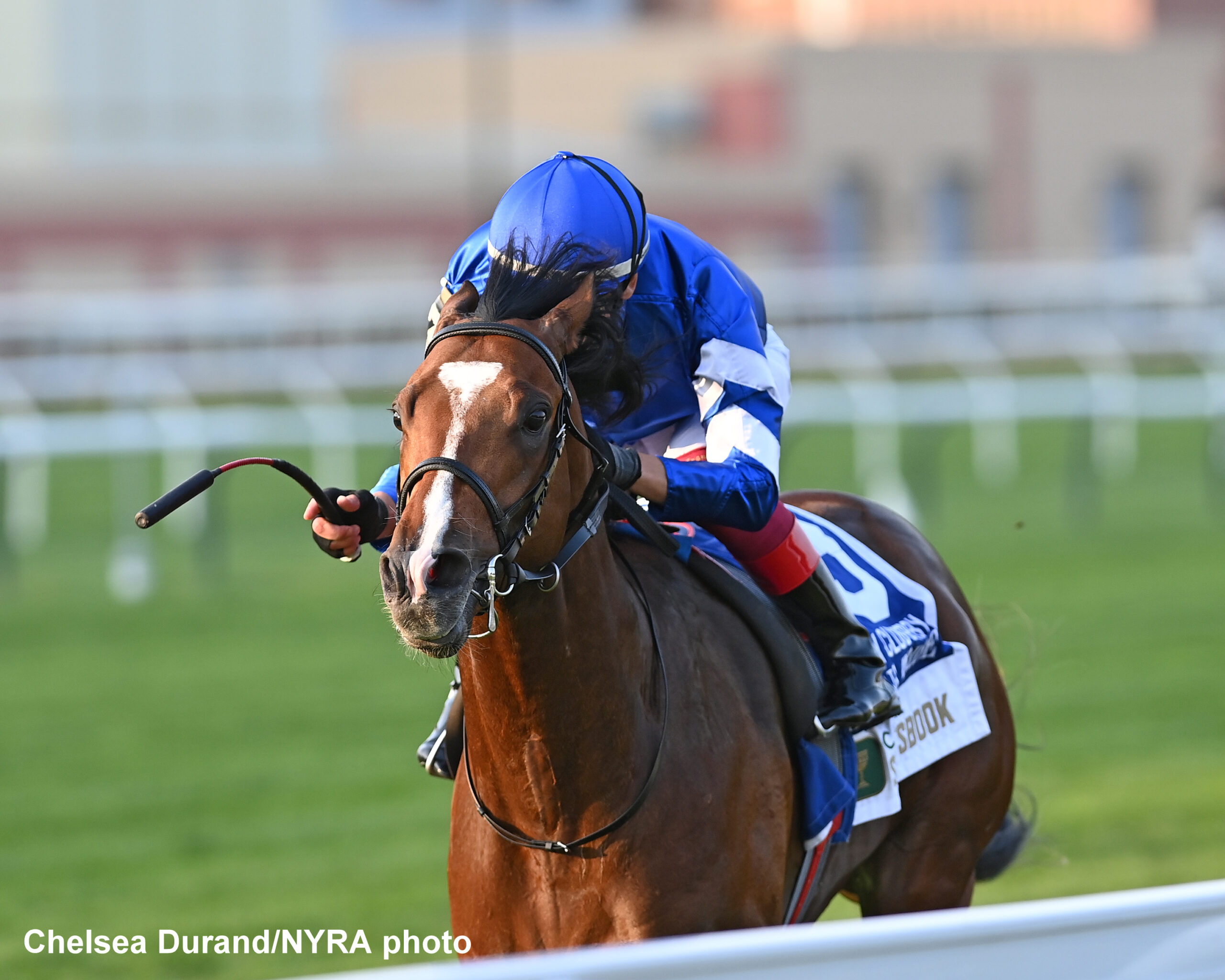 Godolphin's Irish homebred Nations Pride, expertly handled by Frankie Dettori, tipped out and drew off to a 6 1/4-length score in Saturday's Grade 3, $1 million Caesars Jockey Club Derby Invitational, a 12-furlong inner turf test for sophomores, at the Belmont at the Big A fall meet.

Trained by Charlie Appleby, the victory provided Nations Pride with wins in two-thirds of the Caesars Turf Triple series. He finished a closing second to returning rival Classic Causeway after a troubled trip under Dettori in the opening leg, the Grade 1, $1 million Caesars Belmont Derby Invitational in July, before earning redemption under William Buick in the Grade 1, $1 million Caesars Saratoga Derby Invitational in August.

The Jockey Club Derby score was part of a memorable Saturday for Appleby, who saw Buick guide Godolphin homebreds Mysterious Night [Summer] and Modern Games [Woodbine Mile] to Grade 1 Breeders' Cup “Win and You're In” scores at Woodbine Racetrack.

The Flavien Prat-piloted Classic Causeway jumped to the lead through splits of :23.80, 48.33, 1:12.55, and 1:37.02 over the firm footing with Daunt pressing from second position and Nations Pride saving ground in third.

Nations Pride moved closer approaching the final turn with Ardakan advancing wide under Andrasch Starke from fourth position. Dettori and Nations Pride were in need of racing room late in the turn and found their split at the quarter pole, angling out and launching a powerful bid to post a course record score in a final time of 2:24.14. The Grey Wizard rallied up the rail under Luis Saez to complete the exacta by a half-length over a game Classic Causeway. Ardakan, Daunt and Wicked Fast completed the order of finish.

Dettori said he was sitting on a much-improved Nations Pride, a 3-year-old Teofilo colt who summered at Saratoga Race Course and worked frequently there over the Oklahoma training turf.

“He settled in at Saratoga and strengthened up. Obviously, being here, he's adapted to the tracks and it was an easy job for me,” Dettori said. “He broke well and I didn't want to let the one horse [Classic Causeway] have it easy in front. When the outside horse took him on, it was great. It saved me doing the job. From then on, it was just saving ground and getting him to turn properly and heading into the straight, he was never in doubt.”

Dettori said he knew he had the race sewn up when he tipped out at the turn.

“At the corner I knew I had the race won. I knew that and I still hadn't gone for the gears yet. Everyone was cooked,” Dettori said.

Chris Connett, traveling assistant for Appleby, said he was impressed with the ease of victory for Nations Pride.

“He jumped nicely with them today. He travelled around and got a lovely tow into the race,” Connett said. “He quickened up how you would really like him to. He put them to bed pretty quickly.

“Frankie gave him an absolute peach of a ride. He travelled around and picked up just how you would like. It was fairly straightforward for a race like this,” Connett added. “He's got that turn of foot. Since his first run here, he's really grown and filled out that frame of his. He's done fantastic since he's been here. It's nice to see.”

Saez, who won the first three races on the card, said he was pleased with how maiden winner The Grey Wizard performed in his stakes debut for trainer Graham Motion.

“He ran big. He broke from there and I was following the winner,” Saez said. “At the half-mile, the winner kept going but this one never gave up. He tried pretty hard to get second. It was a good race.”

Prat said the tempo may have got the better of Classic Causeway.

“He broke well and got to the lead. It was probably a bit too far, especially today with the fair pace. He ran well,” Prat said.

“The track was good but the inside corners wasn't helpful for him,” Starke said. “He's a big horse with some stride. If we had gone on the outside track, it would really suit him but no excuse. He ran an OK race.”

Appleby won this event last year with Yibir en route to a victory in the Breeders' Cup Turf (G1 at Del Mar and year-end honors as Champion Turf Male.

Connett said Nations Pride's powerful effort will give Appleby a reason to consider another attempt in the $4 million Breeders' Cup Turf in November at Keeneland.

“That will be a decision for Charlie and the team, but he did everything today that puts him in a nice spot to think about it,” Connett said.