Trainer Christophe Clement had high praise for Reeves Thoroughbred Racing's graded-stakes winner Big Invasion after he took down the $150,000 Mahony Stakes, a 5 1/2-furlong turf sprint for sophomores, on Sunday at Saratoga Race Course.

“Today was his best race,” said a smiling Clement. “He's a very good horse, he keeps winning, so there's no doubt about it, but today I thought he behaved better than he's ever done.”

The off-the-pace score was the sixth victory in a row for the son of Declaration of War, who entered from an emphatic 2 3/4-length win to make the grade in the Quick Call presented by the Thoroughbred Retirement Foundation (G3) on July 17 at the Spa. The talented bay's winning streak dates back to a maiden-breaking score at second asking in February at Gulfstream Park and includes stakes triumphs in the Texas Glitter at Gulfstream, the William Walker at Churchill Downs, the Paradise Creek at Belmont Park and his two victories at the Spa.

Emerging from post 2 under regular pilot Joel Rosario, Big Invasion spotted the pacesetting That's Right seven lengths as the field was led through a swift opening quarter-mile in 21.76 seconds over the firm turf. Cadamosto was patiently handled by Tyler Gaffalione two lengths back with Surprise Boss tracking in third.

A determined That's Right held to his lead through a half-mile in 44.14 and dug in under Andy Hernandez to maintain his position at the top of the lane, but Cadamosto loomed to the outside with Big Invasion making giant strides down the center of the racetrack. Determined Kingdom launched his bid between rivals, but Big Invasion proved much the best and won with ease, crossing the wire three lengths clear in a final time of 1:01.42.

Cadamosto held off Determined Kingdom by a half-length with Sky and Sand completing the superfecta 1 1/4 lengths behind them. Surprise Boss, That's Right and Editorial Comment completed the order of finish.

Clement said the ever-improving Big Invasion has rounded into form in the seventh start of his sophomore season.

“He looked better than he's ever done and you know, he came from out of it,” Clement said. “He broke well, he [Joel Rosario] took him back, he behaved well and he finished very well, so I'm thrilled. I'm very happy.”

“The horse relaxed today and it looked like they ran away from him a little bit,” Rosario said. “It was very good and he really came with a run like he always does. He's getting there mentally.

“He was just kind of off the bridle nice and came with a run,” Rosario added. “Sometimes he can jump in the bridle, but he was all good today and it worked out perfectly.”

Clement added that Big Invasion may be ready to take the step up to top company at the Breeders' Cup in November at Keeneland.

“I've always thought he was the best 3-year-old in the country on the grass sprinting. We just don't have a program with Grade 1, Grade 2, that's the way the program is made,” said Clement. “But, I don't know, I'd have to talk to Mr. Reeves. I need to give him some time at some stage and maybe we can think about a race like the Breeders' Cup even if it's very ambitious. Why not?”

It is likely Big Invasion would train up to the Breeders' Cup should Clement choose to send him for an engagement in the Turf Sprint (G1) at Keeneland November 5.

“Maybe, I wouldn't mind doing that, that would be my feeling,” Clement said. “Let's see how he comes out of it and we can go from there.”

It was the 12th stakes victory of the meet for Rosario, who credited his agent, Ron Anderson, and the many owners and trainers he rides for with his successes.

“Thanks to the owners that got me there and all the trainers. My agent Ron does an excellent job all the time for me,” said Rosario. “I'm really happy, and to do it here at Saratoga is even better. I can't explain how happy I am.”

“My horse broke alertly and put himself in good position, traveled good throughout,” Gaffalione said. “He gave me a good run into the stretch and just couldn't hold off the winner today.”

Cadamosto was the first stakes starter of the meet for O'Brien, whom Gaffalione said is an honor to ride for.

“It feels amazing. I've been a big fan of his even when he was a rider and watched a lot of his replays,” said Gaffalione. “He's very impressive and I'm just thrilled to get the opportunity.” 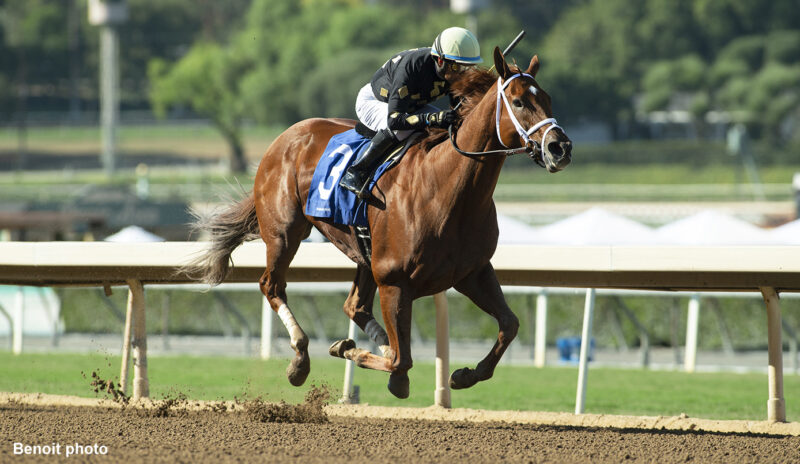