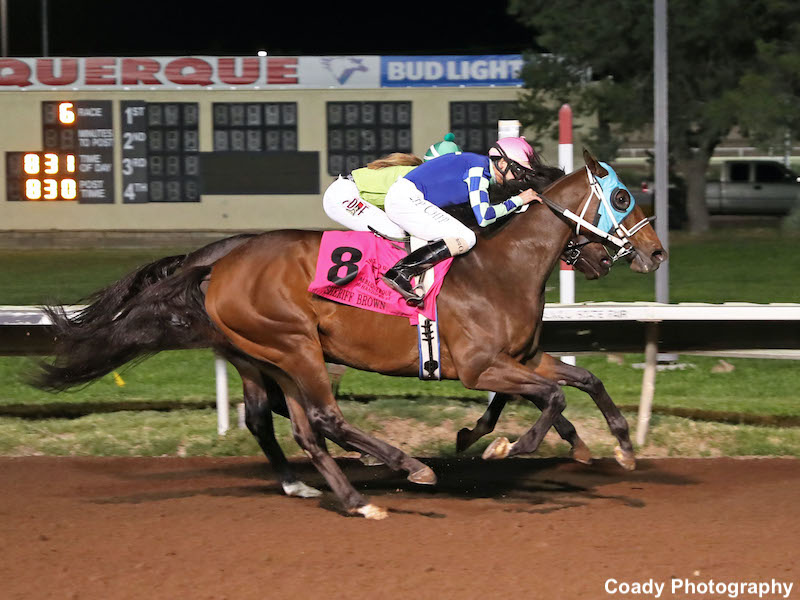 Sheriff Brown and Oscar Ceballos (outside) edge Mine That Star and jockey Joree Scriver in the $200,000 Albuquerque Handicap

Sheriff Brown has been disqualified from his narrow victory in the $200,000 Albuquerque Handicap at the Downs at Albuquerque on Sept. 24 after stewards ruled that jockey Oscar Ceballos violated the Horseracing Integrity and Safety Authority regulations restricting use of the riding crop.

The ruling, dated Sept. 25 and posted on the Association of Racing Commissioners International website, followed a hearing with owner Joseph Robert Peacock of the Peacock Family Holdings L.P. stable. Sheriff Brown, a 6-year-old gelding by Curlin sent off as the 5-2 favorite, was disqualified from first and ordered unplaced after rallying from last, nearly 10 lengths behind, to edge Mine That Star and jockey Joree Scriver by a neck in the 1 1/8-mile contest.

Trainer Todd Fincher said Peacock “absolutely” planned to appeal the disqualification, which cost the owner-breeder $108,000 in what would have been Sheriff Brown's biggest payday.

Under HISA rules, purse disqualifications do not come into play until the 10th strike. A Class 3 violation of HISA rule 2282 is one to three strikes over the six-strike limit; Class 2 is four to nine strikes over; Class 1 is 10 or more over the limit. Fines and suspensions to jockeys increase according to the level of violation.

“They said he hit the horse a total of 11 times,” Fincher said, “but he's not really striking the horse as much as flagging or brushing the shoulder. It's ridiculous in my opinion. If a jockey breaks a rule, the owner shouldn't have to pay for it. and we're not even sure he broke a rule.

“The ironic thing is the horse that ran second broke the whip rule, too,” Fincher said.

In fact, three of the other 10 jockeys riding in the Albuquerque Handicap were sanctioned for Class 3 riding crop violations, fined $250 (or 10 percent of the jockey's share of the purse), and suspended one day. For his Class 2 violation, Ceballos received a three-day suspension and fine of $2,160 (20 percent of his share of the purse). The other were Joree Scriver aboard runner-up Mine That Star, Enrique Garcia aboard fifth-place finisher Tartini, and Alejandro Medellin aboard sixth-place fionisher Zestful.

“Three other jockeys break the rules and we're the only ones who get penalized like this?” Fincher said. “It's stupid, asinine, moronic. I'm all for HISA and the medication side of it. The rest of it they're screwing up pretty good in my opinion.”