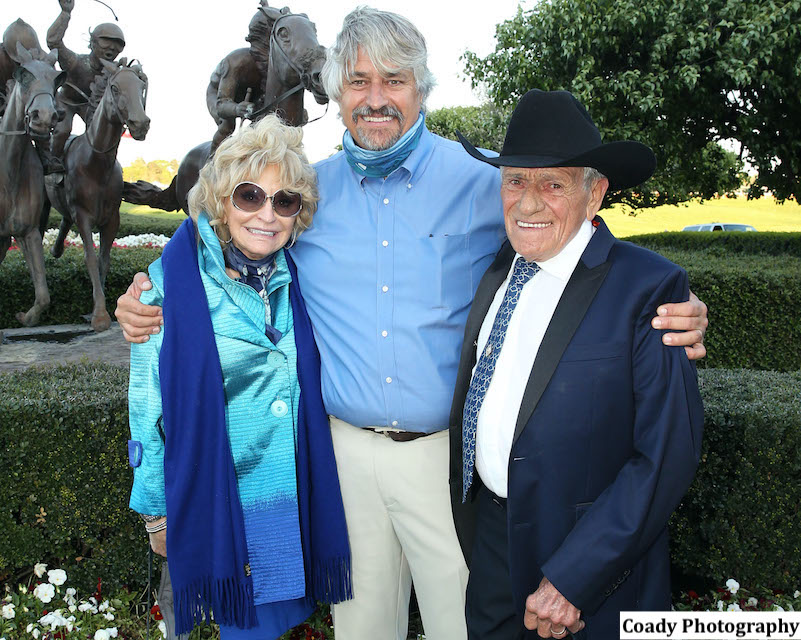 Hall of Fame trainer Steve Asmussen with his parents, Marilyn and Keith

Earlier in the afternoon, Asmussen won Saratoga's fourth race as Jalen Journey romped by 8 1/2 lengths. Jalen Journey and Shanghai's Dream were the only two horses the barn ran Friday. They have three in at Ellis Park on Saturday, along with six at Saratoga, two at Louisiana Downs and three at Monmouth Park.

Asmussen watched the Ellis Park simulcast from Saratoga Race Course in upstate New York, surrounded by his family and a media gaggle, as Shanghai's Dream rallied from last of five under Rafael Bejarano for the landmark-matching triumph to beat 43-1 shot Orient Magic by three-quarters of a length.

“That's how I feel about it, it was meant to be,” Asmussen, a four-time Ellis Park leading trainer, said by phone. “Unbelievably significant win to me and the family. To be able to share the lead-up, getting close, all of the unbelievable support I've had and the well wishes, to be able to get to 9,445 — which we've strived for quite some time — to be surrounded by family, what could be better?

“We had a winner in the fourth race at Saratoga to get one away. And then obviously the only other horse today ties the record, and we have several chances tomorrow to stand alone, so to speak.”

Including at Ellis Park.

“We have two good chances in the stakes, so we'll see what we can do,” Asmussen said.

On Sunday, the last of his five Ellis entrants is Henley's Joy in the $125,000 Kentucky Downs TVG Preview Turf Cup.

Darren Fleming, who is overseeing Asmussen's Ellis operation this summer, has worked for the trainer since 1994. He says his long-time boss and friend — Asmussen named one of his sons Darren for Fleming — is just making good on a vow made even before then.

“We were talking at lunch and he said he wanted to be the best,” said Fleming, who was working in the Louisiana Downs racing office at the time, before he began working for Asmussen. “He was going to be the best and win the most ever.”

“Hmm. Me, too,” he said with a laugh. “We were kids back then. But he had that goal, and he usually got done what he said he was going to get done… I don't think he's changed much. He was exactly the same when he was young. Like everything mattered, was regimented, wanted it done this way. He had the same ideas back then. I think he honed them a lot and improved a lot.”

Asmussen remembers that conversation in the early 1990s, saying, “Darren told his wife, 'He'll do it or he'll die trying.' I didn't know if that was a compliment or not.”

Fleming reflects that it was probably around 5,000 wins that he started thinking Asmussen could surpass Baird. “When the numbers got up there, and you thought it was attainable,” he said. “Then every year it got closer.”

After the race, Fleming said: “It's nice that it happened in Kentucky. I mean, he's done a lot of good here and it's been good to him.”

What did Asmussen say when they spoke by phone immediately after the race? “He said, 'Now I can go to Disneyland,'” Fleming reported.

Asmussen said it was fitting that his long-time assistant saddled the horse that matched the mark, given how much he relies on key assistants such as Fleming and Scott Blasi.

“The significance of it is that we do this collectively, and we do it as hard as we can at every level,” said Asmussen, the all-time winningest trainer at Churchill Downs. “I think that is extremely important. For anybody to think it's easy to win races at lesser places ought to try it – jump right in. Growing up running horses in south Texas, starting out in New Mexico at mixed meets, I honestly believe that being tied with Dale Baird and reaching 9,445 is so significant to me because I realize how hard it is to win any horse race.

“We'll celebrate this as a family for quite some time. It's a wonderful feeling to achieve this, and to be surrounded by people that love you.”

Turf writer Jennie Rees interviewed Asmussen when he was 11 wins shy of Dale Baird. Watch below: