Ken Griffey Jr. announced his retirement from Major League Baseball on June 2, the same day New York jockey Richard Migliore said he would never ride again because of injuries sustained in a racing accident. Griffey and Migliore were stars in their sports, and both men were highly respected by their peers. Griffey is a certainty for election into the Baseball Hall of Fame in Cooperstown, N.Y., and, as Joe Drape wrote in the New York Times, “if there's any justice,” Migliore will some day be inducted into the National Museum of Racing Hall of Fame in Saratoga Springs, N.Y.

When Griffey retired, blogs and baseball fan forums lit up with discussions about Griffey's credentials as one of the great players of modern times (and he is one athlete never suspected of using performance enhancing drugs). Journalists, bloggers and fans could easily find his career stats—everything you could possibly want to know about his career–at MLB.com. For current year statistics, you could even get a virtual ball field showing where every one of his hits and outs went. If you wanted to know how he did during the regular season or post-season, in the daytime or at night, batting against right-handed pitchers or lefties, playing at home or away, on grass or artificial turf, MLB.com had the stats. For the real baseball degenerates, you could find out how he did at the plate against certain pitchers, or with runners in scoring position, or when he wore boxers vs. briefs (just kidding).

Baseball is a statistically driven sport, and the powers that be in Major League Baseball's commissioner's office (just like those in other major league sports) recognize the importance of providing statistics to veteran and novice fans alike.

If Ken Griffey was a jockey, you might be able to find detailed statistics on his career, but it will come at a price. Horse racing's leaders, despite forming a cooperative business 20 years ago to collect and disseminate the statistical information that, like the stats in baseball, drives our sport, decided the information is too valuable to give away. So they charge for it.

So when Migliore retired, a few writers like Drape suggested he belonged in the Hall of Fame, but where can racing journalists, bloggers, and fans go to compare his career with others who are considered the best in the sport. How many wins does the average Hall of Fame jockey have? How many stakes wins, graded stakes wins, what were their winning percentages? How many favorites did they ride as a percentage of all mounts during their careers? Did they win more photo finishes than they lost?

The discussion about Migliore didn't last long, because the statistics were not readily available. And if those statistics were available, Equibase, the company that was formed 20 years ago to help expand the fan base, would have charged for them.

This past weekend generated a great deal of interest within racing's fan base and even among casual fans because last year's Horse of the Year, Rachel Alexandra, and the unbeaten champion mare Zenyatta were racing in separate events in Kentucky and Southern California. Anyone who went to Equibase.com, “Your Official Source for Racing Information,” would have found a nice graphic, with photos of Rachel Alexandra and Zenyatta under the headline “The Girls Are Back!”

But underneath that headline and the two photos was horse racing's marketing message: “Buy PPs.” In other words, if you want to learn more about our sport's two biggest stars, you've got to pay us.

Then, in the wake of Zenyatta's victory in the Vanity Handicap, stories were written about it being a record-setting 17th consecutive win without a defeat, with comparisons to Cigar, Citation, Personal Ensign, Mister Frisky, Peppers Pride and others from the past. But it's hard to compare, discuss, and debate something that  you can't get your hands around.

In baseball, it's easy to compare Ken Griffey to Barry Bonds, Hank Aaron, or even Babe Ruth—at least statistically. It's all there and easy to find.

Can you imagine how dead Fantasy Football would be in college dormitories if the NFL protected its statistical information the way Equibase does? College kids come prepared to draft their teams, laptops in tow, ready to check how many yards per carry Adrian Peterson had, what percentage of completions Drew Brees threw, or how many field goals David Akers kicked. The NFL makes nothing from fantasy leagues, but the statistical information is an integral part of how young fans become engaged with the sport.

Horse racing has a different approach. And guess what? It's not working.

Let me take that back. Equibase may not be working to the full benefit of the industry in its difficult challenge of expanding the fan base, but it is working to the benefit of its owners: the Jockey Club and member tracks of the Thoroughbred Racing Associations of North America. It has paid tens of millions of dollars of dividends to the Jockey Club and the racetracks that own Equibase. The for-profit company has helped make the non-profit Jockey Club a very successful business, one that paid its now-retired president, Alan Marzelli, $1.2 million in total compensation in 2008. Marzelli remains as the chairman and CEO of Equibase.

To his credit, Zeitlin has overseen a loosening of Equibase and the Jockey Club's vice grip on some data. The company now allows anyone to get the racing summary of a horse (starts, 1-2-3 finishes, money won) at no charge, and you can look up every race chart in a horse's career.

“When it comes to the horse stuff, I think we've done a good job,” Zeitlin said.

Oh, really? If Equibase was in charge of Major League Baseball's stats, it would be handled like this: Ken Griffey played 2,671 games in his career, had 9,801 at bats, hit 630 home runs, and had a .284 average. If you want any more details, go through the box scores and look it up.

A horse's past performances and a baseball player's statistical profile have a very similar look, and both are the lifeblood of a fan's interest in the sport. But Equibase just can't seem to let go of the concept that it has to sell past performances, even of horses that no longer race.

As for the jockey information, Zeitlin said “if I could wave a magic wand” and make all the statistics available, “I would have waved it already.”

And if I could wave a magic wand, I would ask each member of the management committee of Equibase—Peter Berube, Sherwood Chillingworth, Steve Duncker, Craig Fravel, Jim Gagliano, Hal Handel, Christopher McErlean, Bill Mudd, Nick Nicholson, Ogden Mills Phipps, and Mike Weiss—to ask this question: Is Equibase doing everything it can to promote the sport and grow the fan base for Thoroughbred racing? 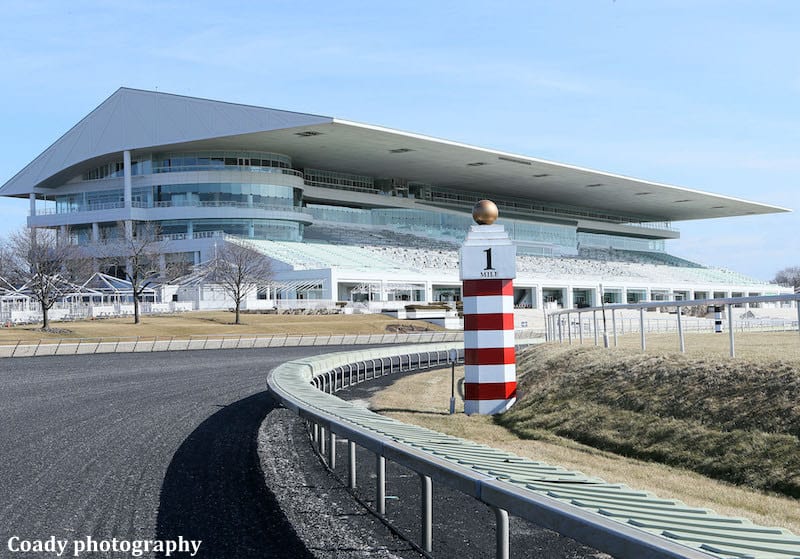 From Riders Up To Bear Down: Going, Going…GONE! The Auctioning Of Arlington Park, Pt. 1