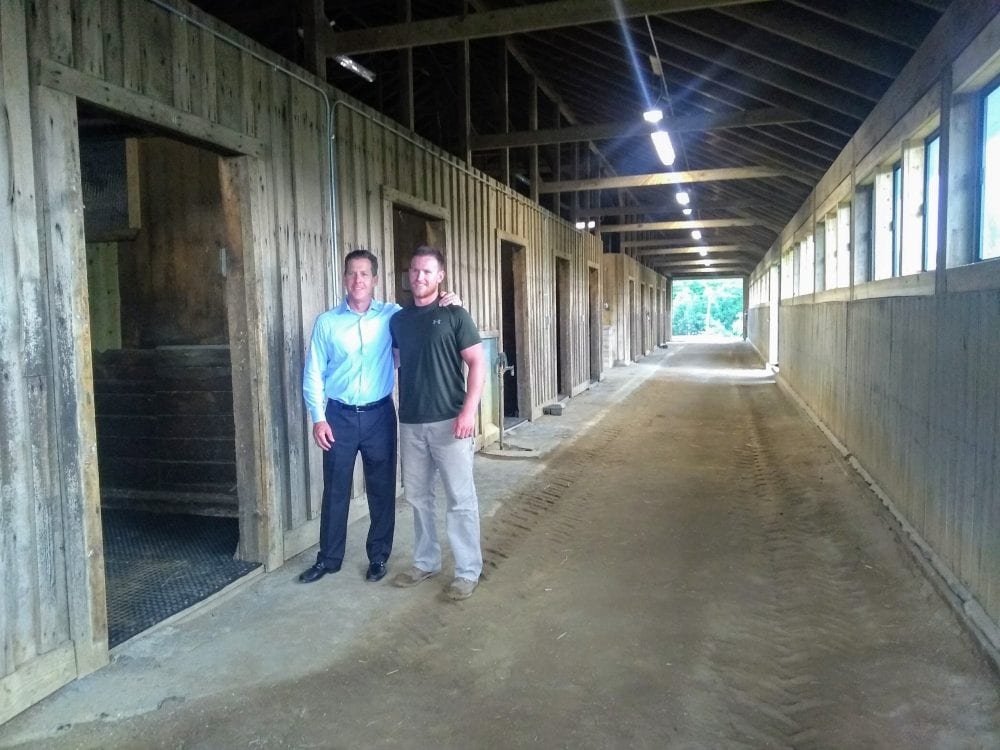 The last year has been a major learning curve for Chuck Kuhn.

The founder of JK Moving Services in Sterling, Va. is the first one to point out he had no experience in the Thoroughbred business when he purchased the Middleburg Training Center in the heart of Virginia horse country. He hadn't been looking to start working in it, either. Kuhn had been approached by a business associate who heard the property was going up for auction and feared a developer would pave over the idyllic facility, which had been built by Paul Mellon in the mid-1950s as a private training base.

Development is a major concern for residents in the Middleburg region, which is close to the sprawl of Washington, D.C. suburbs but has fought to retain its winding country roads, dense forests and acres of farmland. The 149 acres at the training center were worth a lot of money to a lot of builders and the list of private owners interested in dealing with upkeep was short.

“Any tract of land here that's more than 30, 40 acres, it's going to a developer and getting built out,” Kuhn said. “It's not that we're anti-development; I think there are some areas that need to be developed and we certainly need housing, but some areas I think need to remain open space, as well. You've got to protect something, and to me this is the right jewel to be protecting.”

At one time, horsemen say the Middleburg Training Center was the premier place in the region to train horses. Hoist the Flag worked there, as did Spectacular Bid in his early days. A group of horsemen purchased the center from Mellon in the mid-1970s, and local horseman Randy Rouse bought it for $4 million in 2006. Rouse, who was in his nineties when he purchased the property, tried to sell it for several years without success before donating it to the Thoroughbred Retirement Foundation in 2016 for a tax write-off. The TRF, ultimately faced with too much upkeep, put the property up for sale.

Somewhere in there, Kuhn said the facility became run down. Barn roofs started leaking, paint started peeling. Top shelf trainers left, and some of the ones who stayed behind stopped paying their rent. At one point, the police were frequent visitors as the campus became a haven for illegal activity.

When Kuhn outbid the developers, his plan had been to put the acreage into conservation easement, clear the horses out, and let the barns sit empty. But after he took possession, he did something that doesn't happen as often as it should in horse racing: he walked around and started a conversation to find out what people really wanted.

“[My son] Steve and I came in to meet with the tenants to let them know what we were doing and the tenants said 'Would you keep it open as a training track? This is our livelihood, this is a staple in the community, it's important to us,'” Kuhn said.

Kuhn began rethinking his original idea and like any good corporate CEO, he came up with a business plan. It would take him two years to get the property into conservation easement anyway, and he decided to use that as a deadline: if the center could become viable in that time, he'd keep it open. He divided the needed improvements into two columns. He decided to put capital into the first round of improvements, hang out the training center's shingle, and if the property could break even (which it will at around 50 percent occupancy), he'd pay for round two.

Kuhn reviewed the existing tenants, dismissed those who didn't pay and kept the ones who did with the agreement they should help keep up the property they occupied. The project has unexpectedly turned into a very expensive investment for Kuhn with no guarantee of return – something which, he's beginning to understand, is pretty standard in the horse world.

The first order of business was to fix safety concerns with the dirt training track. Steve Kuhn, now installed as general manager of the center, spoke with experts from Fair Hill and others in the racing world to understand what they needed. Crews pulled up the track surface, replaced the drainage base, added more cushion, regraded the surface, and put the top layer back down. They ditched the built-in sprinkler system due to safety concerns and bought a water truck. The old PVC rail was replaced with a more modern safety rail. They are about to raise the two clockers' stands, which previously sat so low that the hilly infield obscured the view of part of the track.

Steve Kuhn brought workers in to revamp the exteriors of the barns in active use, and perhaps surprisingly he said the interiors of the barns really didn't need much work. He repaired roofs, replaced lighting and repainted, but the bones of the barns are solid oak and in good shape. He's also in the midst of replacing fencing, regrading, fertilizing, and reseeding the center's 22 paddocks, which are a big draw for trainers deciding between life at a track or at a center like Middleburg.

Now, there are 50 horses from three or four trainers in the center's 220 stalls. Steve Kuhn said he gets at least five to ten calls per week from people interested in stabling there. Some just want to check prices, some want to take a tour. Increased interest in the Virginia Thoroughbred Association's Virginia-Certified residency program has the phone ringing more these days. The program requires a horse to live in the state for six consecutive months before the end of its 2-year-old year in order to become eligible for purse bonuses when it later runs in the mid-Atlantic. By Chuck Kuhn's calculations, the center should house between 100 and 150 horses by this October. Then it will be time to move into phase two of the construction, which will finish renovations to all the remaining 11 barns.

“In two weeks, Steve's got someone coming in who's going to fill half this barn,” said Kuhn, gesturing to the empty building behind him, which Steve's crews have just finished renovating. “If the demand is there, we'll keep it a viable business.”

In the long term, Kuhn has a few more ambitious plans for the facility. If things go well, he has considered adding an arena onto the property and dedicating leftover stalls to hosting horse shows. A turf course is a possibility, if there's enough interest.

Kuhn also has an eye on conservation of farmland around Middleburg. He purchased an 800-acre parcel of Ned Evans' Spring Hill Farm in Cassanova, Va., which is going through the easement process along with an adjoining 800-acre parcel. The third portion of the farm, which was divided after Evans' death, was bought by a polo owner and remains farmland. Kuhn estimates he has placed 4,400 acres in easement so far in Virginia.

That doesn't mean he's expecting to get into Thoroughbred ownership; Kuhn said Spring Hill is still there but horses aren't.

“Ned would probably be spinning in his grave,” he said. “He did a beautiful job maintaining a beautiful equine breeding campus. Today it's more of a cattle farm. But the good news is, it's a functional, working farm.”

No matter what Evans might have had to say about cows in his carefully-manicured paddocks, he'd have to admit: they're better than concrete trucks.