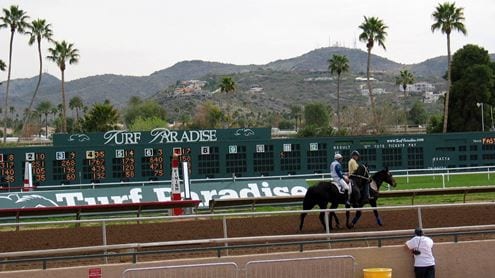 Bettors watching races at Turf Paradise might be wondering why they haven't seen fractional times appearing on the infield message board.

Since the start of the current meet, race fractions have been shown on TV monitors but not on the tote board, as they normally would.

The reason: the Phoenix, Az. racetrack switched timing system companies in early October, and the previous provider, American Teletimer, removed the equipment that allowed Turf Paradise to post fractional times on the tote.

“That was their equipment, their property, so when they left, they took it,” said Turf Paradise General Manager Vincent Francia.

“It was just a better all-around deal,” Francia said. “One issue was certainly financial considerations but equally important if not more so, for a number of years, we've been getting complaints about our video quality and our graphics displays. So we've now gone from the analog into the digital, which enhances the clarity of our picture and our graphics package, which we wanted to display in a more modern, up-to-date format, offering more information to our players.”

Aside from the times not being displayed on the tote, Francia said the transition to a new provider has mostly gone smoothly, although American Teletimer wasn't happy the switch was made.

“During their departure, there were some issues, and the attorneys are discussing, so I really can't comment on that,” said Francia.

As for the tote problem, Francia said a needed piece of software is expected to arrive Wednesday, and within a few days, fractional times should again start appearing on the infield message board.