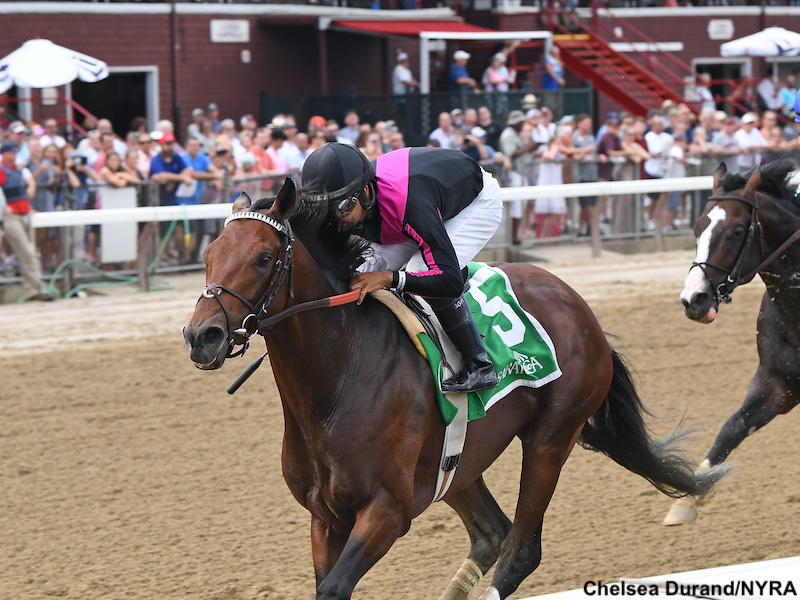 Bruce Lunsford's Kentucky homebred Art Collector proved to be too much for his four rivals as he successfully defended his title in the $135,000 Alydar, a nine-furlong test for older horses who have not won a stakes other than state-bred in 2022, at Saratoga Race Course.

Trained by Hall of Famer Bill Mott, Art Collector has been on quite a journey since the last time he won the Alydar, making trips to West Virginia, California and a last out trip to Saudi Arabia in February when off-the-board in the Group 1 Saudi Cup before ultimately returning to the scene of his 3 1/2-length score last year.

Art Collector delivered a similar performance to last year, taking his place at the front of the field and never looking back. Despite two off-the-board finishes in his last two outings, Art Collector returned to run as strong as ever as Luis Saez sat motionless aboard the son of Bernardini down the lane and cruised home to a two-length victory.

Breaking from post 4, Art Collector held a comfortable advantage entering the first turn with Masqueparade being asked to take up second position under Joel Rosario through an opening quarter-mile in 24.60 seconds over the fast main track. Bal Harbour tracked in third along the rail with Chess Chief to his outside and Mystic Night bringing up the rear.

Positions remained unchanged down the backstretch until Reylu Gutierrez asked Chess Chief for more to the outside of rivals and Rosario shook the reins aboard Masqueparade. Meanwhile, Saez remained cool aboard Art Collector as the field moved through the turn with three-quarters elapsed in 1:13.77.

Masqueparade continued to chase to the outside of Art Collector with Chess Chief digging in down the center of the racetrack, but Art Collector maintained his advantage with little urging from Saez as he approached the wire. His margin diminished as Masqueparade made up late ground, but Art Collector was geared down at the finish and was never threatened by his rival's bid, stopping the clock in 1:51.84.

Masqueparade completed the exacta 7 1/2 lengths ahead of Chess Chief with Mystic Night and Bal Harbour rounding out the order of finish. King Fury was scratched.

Mott, who scored his first stakes win of the meet, said the effort was just what he hoped to see.

“He's fine with the distance, he likes the track and it was a good comeback race for him since he hasn't been out since February,” said Mott.

Art Collector has shown versatility in his nine wins and has won from off the pace as well as on the lead. Mott said he was prepared for a potential challenge up front.

“We thought maybe if the outside horse [Masqueparade] wanted to go to the lead, we'd let him go and we'd have a target,” said Mott. “But as it worked out, he was on the lead by himself. It looked like he was going easily enough and it looked like every time that horse ran to him, he just maintained the same advantage.”

“He's a pretty cool horse to ride. He's pretty smart,” Saez said. “He broke and controlled the pace. He switched leads at the point he's supposed to by himself, and he did everything beautiful. My plan was to break from there and if he took the lead I know he's pretty fast, so if he gets the lead we'll take it. If not, we'll track somebody. He's a horse that you can ride any way you break.”

Art Collector used his previous Alydar win as a springboard to graded stakes success in the Grade 2 Charles Town Classic and Grade 1 Woodward later that fall at Belmont Park. Mott said it is likely he will continue on to defend his titles in those races as well on August 26 at Charles Town and October 1 at Aqueduct Racetrack, respectively.

“We might go to Charles Town, back in the Woodward. Short term, we're definitely thinking of going to the Charles Town Classic with him,” said Mott. “That could change, I'll talk to Bruce and see what he wants to do. He was excited to go there last year, he might want to go back.”

Lunsford and Mott have shared some memorable moments together, including a close second in the 1999 Belmont Stakes with his homebred Vision and Verse. Lunsford went on to own and breed a graded stakes-placed half-sister to Vision and Verse named Distorted Legacy, who produced Art Collector.

“He is a special horse. I love the horse. I love his rider,” said Lunsford. “Luis and I go way back with his ex-agent [Richard DePass] and his current agent Kiaran [McLaughlin]. It's just a great thrill for me to have a horse of this quality and the brothers and sisters and the mother.

“Bill and I go way back. We were together in the Belmont Stakes. I'm watching it with him, and I said, 'We're going to win, we're going to win.' But he barely got beat, it was a lot of fun,” Lunsford added as he recalled Vision and Verse.

Rosario said Masqueparade did his best behind the slow fractions set by Art Collector.

“The trip was good. It was a little on the slow side at the beginning and I had to get after him a bit to get him going,” said Rosario. “The horse in front was going easy. He ran his race.” 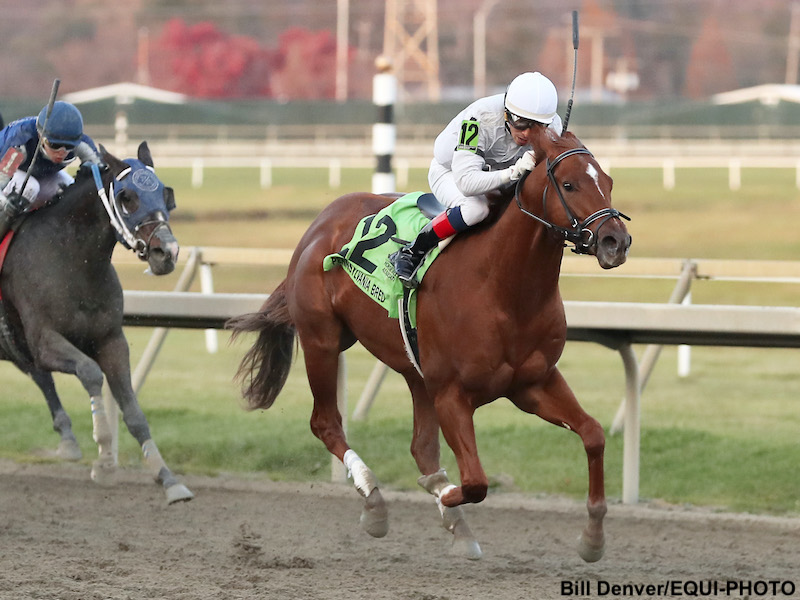