Hall of Fame trainer Bob Baffert will have three opportunities to win the $300,000-guaranteed Starlet – the final Grade 1 of 2022 for 2-year-old fillies – for a sixth consecutive year Saturday at Los Alamitos.

The Starlet is the first half of a special daily double – $1 minimum wager – that also includes the 50th running of the $750,000 Champion of Champions later that night.

Owned by Michael Lund Petersen, Faiza was supplemented to the Starlet for $10,000. A $725,000 purchase at the Fasig-Tipon Mid Atlantic 2-year-olds in training sale in May, the daughter of Girvin and the Smart Strike mare Sweet Pistol toyed with six opponents in a stylish debut Nov. 12 at Del Mar.

Owned by Mike Pegram, Karl Watson and Paul Weitman, Doinitthehardway is a three-start maiden who has been second twice and third once. In her most recent race, she was runner-up behind heavily-favored Ice Dancing going eight furlongs Nov. 25. The Street Sense filly out of the Awesome Again mare Virtuoso has banked $39,600.

Pegram, Watson and Weitman also own Fast and Shiny, a daughter of Bernardini and the Lion Hearted mare Spotted Heart. She has one win in four starts and earnings of $66,500. She returns to the dirt – the surface on which she scored first time out Aug. 7 at Del Mar – after consecutive off the board finishes on turf.

Owned by West Coast Stables LLC, Pride of the Nile will try the main track for the first time after three outings on grass. She's 2-for-3 on the turf, breaking her maiden at one mile Oct. 2 at Santa Anita before repeating at the same distance six weeks later in an optional claimer at Del Mar.

A Pioneerof the Nile filly out of the Hard Spun mare Into Minnie, Pride of the Nile has earned $85,800.

Blessed Touch will race beyond seven furlongs for the first time in her career for trainer Tim Yakteen and a partnership that includes Pierre Amestoy, Jr., Jean Amestoy and Leslie and Roger Beasley.

The Girvin filly out of the Street Boss mare Blushing Touch is 1-for-3 with a bankroll of $58,200. She finished second behind Justique in the Desi Arnaz Nov. 19 in her stakes debut.

Second at 24-1 behind And Tell Me Nolies in the Grade 2 Chandelier Oct. 8, Uncontrollable will try for her second win in four starts for Repole Stable and trainer Michael McCarthy. A California bred daughter of Upstart and the Include mare Behavioral, Uncontrollable has earned $111,750.

Completing the field is Classymademoiselle, who was last of seven when 49-1 in the race taken by Pride of the Nile Nov. 12. Owned by Javier Perez and trained by Jorge Periban, the Malibu Moon filly out of the Bluegrass Cat mare Brush Strokes has one win – via disqualification – in six starts and has earned $61,440.

From inside out, the field for the Starlet Stakes: 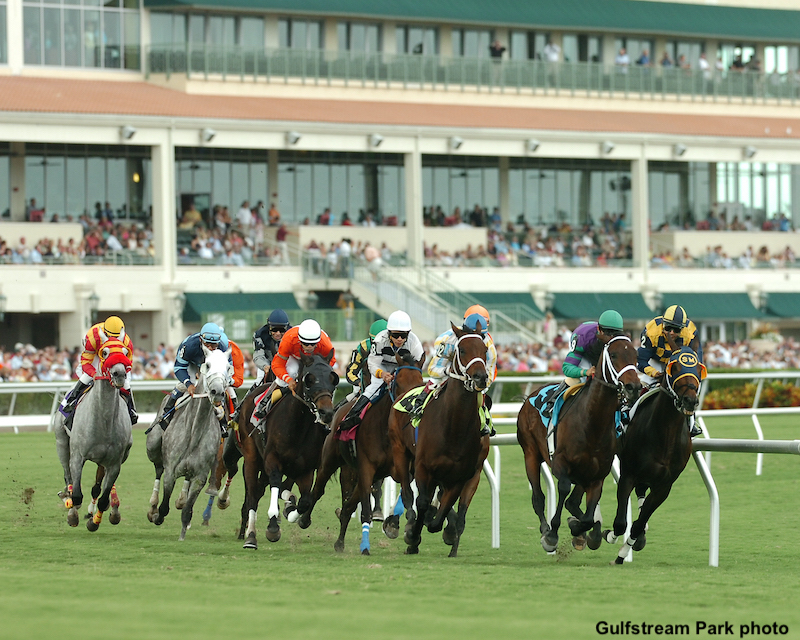