Bye Bye, one of two entrants for trainer Christophe Clement, will see an increase in distance, arriving off a narrow third in the 5 ½-furlong Galway on August 15 at Saratoga Race Course. The daughter of leading sire Into Mischief received a ground-saving trip by jockey Joel Rosario last out, maintaining her inside position while gaining ground in the stretch but missed a neck to eventual winner Star Devine.

“She had a beautiful ride by Joel Rosario along the rail. It looked like she was going to get there but she just got caught in the last sixteenth of a mile,” said Clement assistant Christophe Lorieul. “She ran very game and I think she's back to herself.”

Bye Bye, the lone graded stakes winner in the field, tasted stakes success at Belmont Park in May in the Grade 3 Soaring Softly, breaking from the outside of ten other fillies and remained in the clear throughout the seven-furlong journey while holding off a late rally from Invincible Gal to produce a career-best 83 Beyer Speed Figure.

Clement will also saddle three-time stakes placed Honey Pants for owners Jim Bakke and Gerald Ibister, Honey Pants arrives off a runner-up effort in the Alywow on July 31 at Woodbine. She previously garnered black type when second in the Stewart Manor on November 7 at Aqueduct and followed with a runner-up effort in her seasonal bow in the Ginger Brew on January 2 at Gulfstream Park.

A gray or roan daughter of Cairo Prince, Honey Pants owns two career victories, both of which were at six furlongs on the Belmont turf. After breaking her maiden at second asking in wire-to-wire fashion by four lengths in October, she displayed different tactics when coming from off the pace in a June 20 allowance tilt, where she defeated next-out winners Too Sexy and Time Limit.

“She was second last time at Woodbine and now she is back on home court,” Lorieul said. “She's ran quite a bit. She broke her maiden last year with [jockey Manny] Franco aboard. She seems to be doing well at the moment.”

Rosario retains the mount aboard Bye Bye from post 10, while jockey Irad Ortiz, Jr. will ride Honey Pants from post 9.

Arnaud Delacour will saddle Michael Hernon's Sussex Garden for her third start in North America. The Irish-bred daughter of Acclamation, conditioned in Europe by Jessica Harrington, seeks her first victory since a debut win last June over good going at Naas in Ireland. She followed with a second-place finish to subsequent dual Group 1 winner Mother Earth in the Group 3 Coolmore Irish EBF Sprint on July 4 at Naas ahead of a distant tenth in the Group 2 Lowther last August at York.

Sussex Garden made her debut for Delacour when fourth in the one-mile Wild Applause on June 26 at Belmont Park. She enters off a third-place finish when cutting back considerably in distance in a 5 ½-furlong allowance tilt on August 7 at Saratoga Race Course.

Delacour said his filly should appreciate the added furlong in the Christiecat.

“I thought she ran well last time running third to some good horses. I was pretty happy with the race,” Delacour said. “I like the added distance. The added six furlongs will fit her. I think the mile was a touch too long for her. She's one of those fillies that's in between, six to seven is probably her best distance.”

Displaying tactical speed in both of her stateside efforts, Delacour said he would like to see Sussex Garden show some early speed for Friday's race.

“I would probably try to use her speed and send her in front or close to the pace. I think she'll be more efficient like that,” Delacour said.

Following a 6 ¾-length victory in her turf debut last August at Saratoga, the daughter of veteran champion-producing stallion More Than Ready garnered graded stakes black type when second to Plum Ali in the Grade 2 Miss Grillo in October at Belmont Park.

Caldee defeated winners, including subsequent stakes-placed Nevisian Sunrise, going one mile on May 28 over the Widener turf at Belmont. She followed her winning effort with a pair of runner-up finishes in the Christiana on July 3 over soft going at Delaware Park, and the Kentucky Downs Preview Dueling Grounds Oaks on August 7 at Ellis Park, where she finished behind next-out Virginia Oaks winner Flippant and ahead of next-out Dueling Grounds Oaks winner Adventuring.

The Christiecat honors Fox Ridge Farm's Grade 1-winning turf distaffer, who captured five graded stakes wins for trainer Patrick Kelly, including the 1992 Flower Bowl Invitational and the 1991 Diana. The daughter of Majestic Light retired with a 35-11-7-6 record and nearly $800,000 in lifetime earnings.

The Christiecat is slated as Race 8 on Friday's nine-race card, which also features the $100,000 Allied Forces in Race 7. First post is 1 p.m. Eastern.

Admission for the Belmont fall meet is available for just $5. Buy online at Ticketmaster.com or at the gate. Group hospitality seating in the West Wing and Top of the Stretch can be purchased by calling the NYRA box office at 844-NYRA-TIX. Box Seats can be purchased by emailing [email protected] or calling 718-296-5172.

The Belmont Room will be open every Saturday and Sunday for dining reservations. Reserve your spot today at nyra.com/belmont/visit/dining. 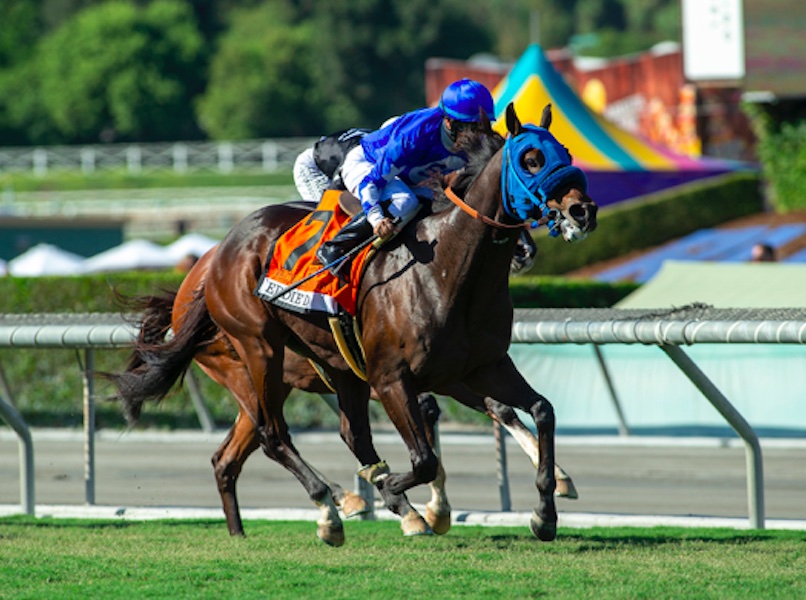