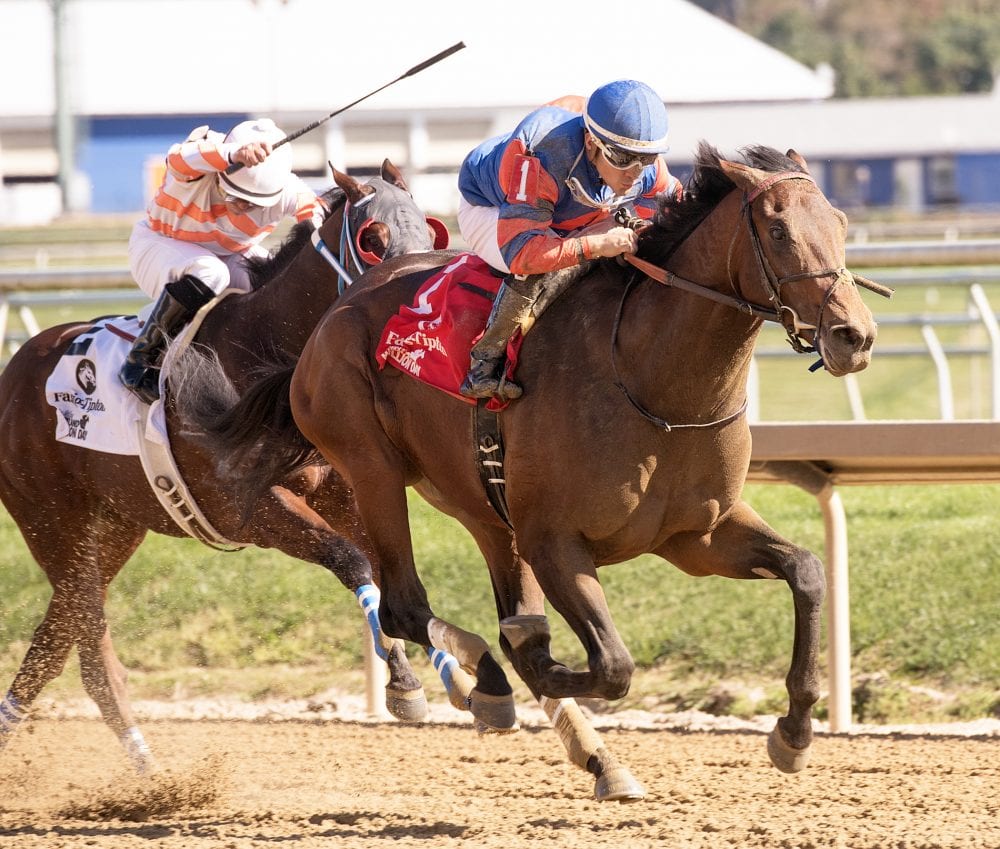 The Graham Motion-trained juvenile son of Buffum broke slowly from the starting gate as even-money favorite Jamaican Don quickly sprinted to the lead on his way to setting solid fractions of 22.30 (seconds) and 45.68 for the first half mile of the six-furlong kickoff to Saturday's seven-stakes Maryland Million program.

Patiently handled by jockey Nik Juarez, Clever Mind advanced on the turn into the homestretch before surging through the stretch to overtake Jamaican Don, who finished another four lengths clear of Onemoregreattime under Fernando De La Cruz.

“We got away a little slow, but Graham told me not to rush him. I just sat behind the field and when I asked him at the 5/16ths-pole I thought I had a lot of horse underneath me. Coming for home he really kicked in,” Juarez said.

Clever Mind, the 7-1 third betting choice who ran six furlongs in 1:10.05, showed a strong series of workouts at Fair Hill Training Center in preparation for his debut.

“I was very impressed with him. Obviously, I liked him a lot. Otherwise, I wouldn't have run him in the first place. But you do second-guess yourself a little, plus he drew the one hole, which I thought would be a little difficult for him,” said Motion, who watched the Nursery from his home in Fair Hill, Md. “He's a really classy colt and Nik did a great job.”

Clever Mind impressed his jockey during his pre-race warm-up.

“[Motion] just told me that he was just a real classy colt and told me to take him away from the pony – so that means he's going to be classy,” Juarez said. “Graham does a great job, so I had all the confidence in him.”

Motion said Clever Mind had come to his stable a little later than most of his 2-year-olds this year and needed more time to get ready for his debut.

“I think I'm going to take it one step at a time. I'll probably keep him local before a throw him into the deep end,” Motion said. “One race that comes to mind is the one Irish War Cry won last year.

The Marylander, won by Motion-trained Irish War Cry by a nose last fall before going on to win the Holy Bull (G2) at Gulfstream and competing in the Triple Crown, will be run as the $100,000 Heft Stakes Dec. 20.

Limited View once again demonstrated erratic behavior at Laurel Park Saturday before and during the $100,000 Maryland Million Lassie, but the daughter of Freedom Child somehow overcame a horrendous start to prevail in the six-furlong sprint for juvenile fillies.

“You never know what she's going to do next. It's so tough,” said trainer John Salzman after his filly registered an unlikely victory by three quarters of a length. “She trains so good. She's probably one of the best horses I've ever had, but when she gets it into her head….Well, it's hard to deal with.”

Limited View, who had to be scratched from the Schuylerville (G3) at Saratoga in July due to bad behavior in the paddock and whose performance was compromised by a bad start in the Adirondack (G2) at Saratoga in August, spotted the field many lengths after taking a right-hand turn out of her outside post position in the starting gate. The filly trailed the field by more than 15 lengths along the backstretch, looking hopelessly beaten before accelerating on the turn with a wide sweep. Limited View lost even more ground while swinging wide into the stretch but responded to jockey Edgar Prado's urging to overtake Pikachu Princess nearing the wire. Pickachu Princess, who finished three-quarters of a length ahead of late-closing Buff's In Love, had taken over the lead at the top of the stretch as Margie's Money, the 9-5 favorite, faded after setting the pace.

Limited View, who ran six furlongs in 1:12.15 to win her third race from four starts, gave Prado his 17th Maryland Million victory, which equals the record held by Ramon Dominguez.

“I owe everything to Edgar. He didn't panic. At Saratoga, the kid panicked. He went 44 (seconds) down the backside. Edgar didn't get nervous,” Salzman said. “Did I get nervous? I was standing here hiding and I started heading for the paddock. Then, she kept running and I said, 'She's not going to get there. These are nice fillies she's trying to run down.' But man, I don't what else to say. She's just a super horse.”