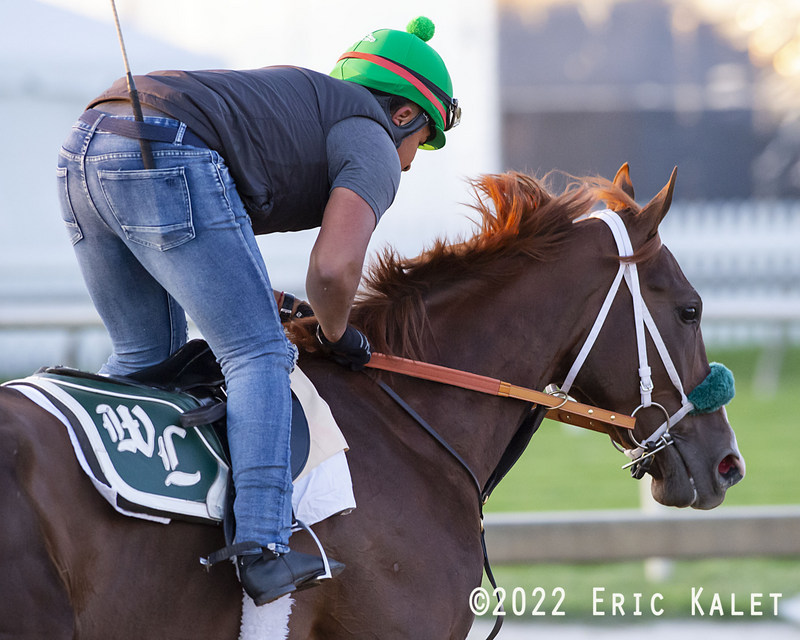 Secret Oath, shown May 18 at Pimlico

In the spring, the best 3-year-old filly in the country was Briland Farm's Secret Oath. She won three of her first four starts of 2022, including the prestigious Grade 1 Kentucky Oaks.

The start to the second half of the season belonged to a 3-year-old filly named Nest, who assumed the top spot in the division after decisive scores in a pair of Grade 1s at Saratoga, the Coaching Club American Oaks and Alabama. Secret Oath was second in both races.

Secret Oath is the 2-1 morning-line favorite in the 1 1/16-mile race, which attracted nine 3-year-old fillies. Nest is not running in the Cotillion.

Secret Oath, a daughter of Arrogate, arrived at Parx Wednesday after vanning down from Saratoga Race Course, where she remained after the Spa's 40-day summer meeting ended on Labor Day. She and Lukas' longtime assistant, Sebastian “Bas” Nicholl, got their first looks at the Parx oval on a warm Thursday morning.

Nicholl, aboard a pony, accompanied Secret Oath and exercise rider Pedro Requena onto the track just after 9 a.m. Secret Oath stretched her legs with a light jog and then departed, heading back to the barn.

“She is only getting stronger,” said Lukas, who plans on being at the race, “She sure is filling out and getting better and holding a lot of weight. She is probably maturing into the filly that we wanted her to be.”

Secret Oath has raced seven times this year and has three wins, two seconds and a third. She has three wins in four career starts at the Cotillion distance. Luis Saez, aboard since the Kentucky Oaks, takes the return call.

Lukas admits that Nest is the leader of the 3-year-old filly division, but Secret Oath can close the gap with a Cotillion win.