'I Have Entertained The Thought Of Putting Her On The Road To The Kentucky Derby': Hoosier Philly Powerful In Golden Rod Win - Horse Racing News | Paulick Report
Skip to content
Closex 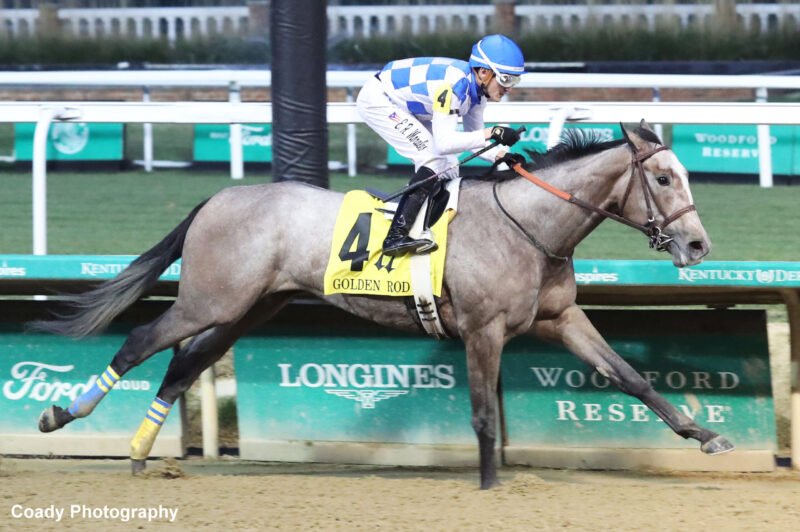 Into MIschief’s daughter Hoosier Philly, with Edgar Morales aboard, scores by open lengths in the G2 Golden Rod

The promising 2-year-old filly Hoosier Philly stamped herself as a divisional leader and tantalizing prospect for the 2023 Longines Kentucky Oaks (G1) as she easily won the $400,000 Golden Rod (G2) Saturday at Churchill Downs with overwhelming authority by five lengths.

“I've said multiple times, and I hope it doesn't come across as arrogant, I've never seen any horse like her,” said Amoss, who trained the sensational Serengeti Empress that won the 2019 Kentucky Oaks and banked more than $2.1 million between 2018-20. “I've been training since 1987 and she's different than anything I've ever had come in my barn. The instructions to Edgar were pretty simple, he was on the best horse and ride her with confidence.

“Now, she'll get a break by design and will bring her back as a 3-year-old,” Amoss. “She's a filly, but I have entertained the thought of putting her on the Road to the Kentucky Derby.”

Hoosier Philly was relaxed throughout the race and rated in fourth in the clear down the backstretch behind pacesetter T Max, who clicked off fractions of :24.29 and :47.79. Around the turn for home, a driving Pure Pauline engaged T Max for the lead, crossing six furlongs in 1:12.28, but Hoosier Philly was a menacing presence on the outside and she dragged Morales to the front without being asked and with her ears pricked.

“She's unbelievable,” Morales said. “I had so much horse the entire race. I got behind horses a little bit going into the first turn but kept her outside and she was moving so easily. It's so much fun to ride her and so easy, too. She knows exactly what to do and when to do it.”

Morales only tapped Hoosier Philly a few times on her right shoulder, one to switch her lead foot and the others to stay interested, as she drew away in a stunning performance.

Knockyoursocksoff was the “winner” of the separate race for second, prevailing by a neck over Pretty Mischievous.

Prior to the Golden Rod, Hoosier Philly drew away to comfortably win the Rags to Riches by 7 ½ lengths on Oct. 30 after breaking her maiden Sept. 25 by 1 ¾ lengths, both also at Churchill Downs. She is now perfect in three starts with earnings of $432,610.

“We were hopeful to get her started mid-summer but she had some 2-year-old growing things go on,” Amoss said. “So, we stopped on her and got her back started here Churchill and ran a distance that was definitely not her strong point. She went less than three-quarters of a mile that day, but she still was able to win impressively. We saw who the real Hoosier Philly was in her next start when she was able to stretch her legs and go one-mile in the Rags to Riches.”

By Into Mischief, Hoosier Philly is out of the Tapit mare Tapella. The gray or roan filly was bred in Kentucky by Candy Meadows LLC and was sold to Lauren Carlisle, agent for $510,000 at the 2021 Keeneland September Yearling Sale.