Mopo Racing's Alwaysinahurry swept to the lead at the top of the stretch and turned back a game effort from One Ten through the lane to earn his second career stakes victory in Friday's $75,000 Howard and Sondra Bender Memorial at Laurel Park.

The seven-furlong Bender for 3-year-olds and up and $75,000 Politely for fillies and mares sprinting six furlongs, both restricted to Maryland-bred/sired horses, served to co-headline the first of back-to-back stakes days over Thanksgiving weekend. The winners of both races, including Politely winner Fille d'Esprit, are by Northview Stallion Station resident and Maryland leading sire Great Notion.

Ridden by Angel Cruz for trainer Dale Capuano, Alwaysinahurry ($7.40) completed the distance in 1:12.85 over a fast main track in picking up his fifth lifetime win and second in a stakes following the 2021 Concern at historic Pimlico Race Course.

Bred in Maryland by Dr. and Mrs. Thomas Bowman Quin Bowman and Rebecca Davis, Alwaysinahurry had placed in two subsequent stakes attempts, finishing second in the 2021 Star de Naskra and third in the Oct. 22 Maryland Million Sprint, both at six furlongs.

“We were looking forward to this race, especially after the Maryland Million,” winning trainer Dale Capuano said. “I've been wanting to get him stretched out to a mile eventually. This should be a good steppingstone to see if he can go that far.”

Cruz gave Alwaysinahurry clear run in fourth as Going to the Lead – third in an optional claimer at Laurel four days earlier – and multiple stakes winner Tappin Cat dueled for the early lead through a quarter-mile in 23.36 seconds. Alwaysinahurry ranged up to challenge the leaders rounding the far turn and straightened for home in front as One Ten loomed a threat on the far outside into midstretch.

“When he broke and he was sitting right there, I felt pretty good,” Capuano said. “Those two horses were out there and Angel knows how to ride him. He got him in the clear and pretty much I figured he was going to be tough from the quarter pole to the wire. It worked out excellent.”

Alwaysinahurry finished 1 ½ lengths ahead of One Ten, who was 4 ¼ lengths clear of Going to the Lead in third. It was a nose back to 2021 Maryland Million Classic winner Monday Morning Qb in fourth, followed by Tappin Cat and Antipoison. Thirteen-time stakes winner Whereshetoldmetogo, the 2-1 program favorite, was scratched.

C J I Phoenix Group and No Guts No Glory Farm's Fille d'Esprit continued her remarkable run since being claimed two summers ago, rolling to a commanding 5 ¾-length triumph in the Politely.

Favored at 3-5, Fille d'Esprit ($3.20) gave trainer Jerry Robb his third consecutive win in the Politely, following Anna's Bandit in 2019 and Princess Kokachin in 2021, all with jockey Xavier Perez aboard. The Politely was not run during a pandemic-shortened 2020 stakes schedule.

“She's just incredible. I'm so happy to win this race [a] third time for the main barn,” Perez said. “Today was another one for the books. Everybody knows about what I've been through with her, all the headaches in the morning, but she's just getting better and better.”

Perez settled Fille d'Esprit in third behind 14-1 long shot Targe, who was pressed through a quarter-mile in :22.63 by Paisley Singing. Fille d'Esprit moved up with little urging midway around the far turn, effortlessly cruised to the lead and opened up through the stretch.

Juror Number Four stayed up to be second by a length over Hollywood Walk. Paisley Singing and Targe completed the order of finish. Queen Sheba was scratched.

Robb claimed Fille d'Esprit for $10,000 in August 2020 and she has won 10 of 20 subsequent starts, five of them in stakes, including the Maryland Million Distaff in her previous outing, to top $600,000 in lifetime earnings. Both she and Anna's Bandit are by  Great Notion out of No Armistice mares.

“She means the world,” Perez said. “She's kind of related to Anna's Bandit, so that's big. She's filling those big shoes and doing a good job. If she keeps doing how she's doing, she's going to be the same way Anna was.”

Bred and raced by Mrs. Richard du Pont, Politely won 13 stakes and placed in eight others from age 2 to 5, setting an Atlantic City track record in the 1967 Matchmaker and matching it the following year. Retired following the 1968 season, she won 21 of 49 career starts and was a member of the inaugural Maryland-bred Thoroughbred Hall of Fame Class of 2013. 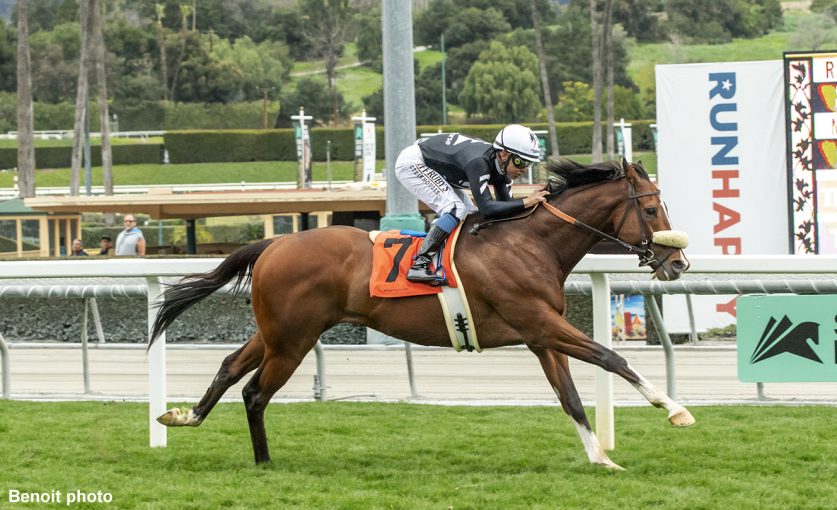 Bay Storm Ships In For Megahertz In Pursuit Of First Graded Win, To Take On D’Amato Trio