The 5-year-old Temple City gelding made his first start for trainer Tom Morley last out, upsetting an optional-claimer at 10 furlongs on the Belmont Park turf at odds of 45-1 under returning rider Eric Cancel. Dynadrive, a veteran of 24 starts, secured his first career stakes win in the Lure, this time at odds of 23-1, with a brave stretch-drive thrust to capture the 1 1/16-mile Mellon turf test restricted to older horses yet to win a graded stakes this year.

The New York-bred millionaire Somelikeithotbrown was gunned to the lead by Irad Ortiz Jr. from the outermost post 8, marking off fractions of :22.78 and :46.05 with Canadian Classic winner Safe Conduct tracking in second, six lengths back, over the firm going as Dynadrive sat a distant next-to-last.

Dynadrive traveled with purpose through the final turn, knifing between rivals at the top of the lane, as Sifting Sands, under Manny Franco, launched his bid to the inside of Safe Conduct. Sifting Sands was in front at the stretch call as Dynadrive continued to advance, finding space between the retreating Somelikeithotbrown to meet up to the inside of the new leader. The two rivals battled the remaining furlong to the wire with Dynadrive prevailing by a head in a final time of 1:39.83.

It was another 1 ½ lengths back to Duke of Hazzard in third with Public Sector, Safe Conduct, Somelikeithotbrown, South Bend and T D Dance completing the order of finish.

The victory marked the second Saratoga stakes score for Cancel.

“There was a lot of speed in the race with the horse on the outside. I just tried to get him to relax,” Cancel said. “I got him where I really wanted to be and everything just worked out very well.

“To be honest, I knew I had it,” added Cancel regarding the close finish. “I had a lot of faith in my horse. He ran a huge race out of the layoff and he came 200 percent today, so I was expecting this performance from him.”

It was the first stakes win of the meet for Morley, who has won with his last three starters at the Spa after posting a double on Wednesday with Charge Account and Dot's Dollar.

Morley was quick to credit his Belmont staff for having Dynadrive ready for his Spa stakes debut.

“We got the horse in and had a number of little issues we needed to wind out. Nothing really physical, more mental,” Morley said. “He was a horse that wanted to be tremendously aggressive in his morning training. We were trying to get him to slow everything down. He has done very, very well in our barn. My guys at home at Belmont have done a great job with him.”

Dynadrive's last stakes appearance came in an off-the-board effort in the Grade 2 Turf Cup in September at Kentucky Downs when in the care of trainer Mike Maker. He was claimed for $62,500 two starts later by his current connections and trainer Robertino Diodoro for whom he made two starts this winter.

Jav Provenzano of co-owner Flying P Stable said the win was extra special as Dynadrive is a half-sibling to graded-stakes winner Tell Your Daddy, who is also trained by Morley,

“Today, I got really lucky because I have the half-brother, but I also have a half-sister, a 2-year-old filly [Astrila] that's with Bill Mott,” Provenzano said. “Every time they keep doing something good, I keep making more money without even racing the filly. It's been awesome.

“I can't knock any trainer, but not every trainer can figure out every horse. I knew Tom had 'Daddy,' so I told Robertino that I'd like to move the horse and see if things change,” added Provenzano, regarding the trainer switch. “I do that with all my trainers, I'll move a horse here and there. He [Morley] was the best choice of all my trainers because he had the half-brother and Robertino pointed out that he had a little EPM going on, so we had to get him medicated and give him some time off. He came around.”

“He's been showing more and more natural speed in his morning works without overdoing it. I felt that if they went a good pace in here, it might set up nicely. That was wonderful for me to see those fractions, only Pegasus could have held on doing that,” Morley said.

Trainer Chad Brown, who won last year's edition with Flavius, was represented by 8-5 mutuel favorite Public Sector, a multiple graded-stakes winner at the Spa for Klaravich Stables; and Peter Brant's 6-1 chance Sifting Sands, who had won 2-of-3 starts on the Saratoga turf heading into Saturday's test, including last year's restricted Better Talk Now.

“He always runs well for me. I think he likes the course here, too.,” Franco said. “He was giving me his all. He [Dynadrive] got to the inside and caught me by surprise a little bit. But my horse was game.”

Bred in Kentucky by Spendthrift Farm, Dynadrive, out of the Rockport Harbor mare Harbingerofthings, banked $74,250 in victory, while improving his record to 8-5-2 from 24 starts. He returned $48 for a $2 win ticket. 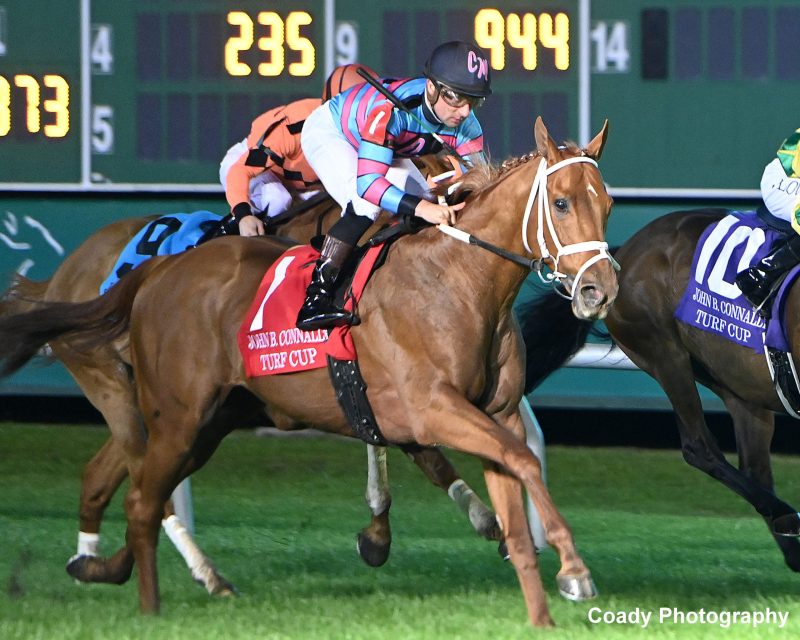 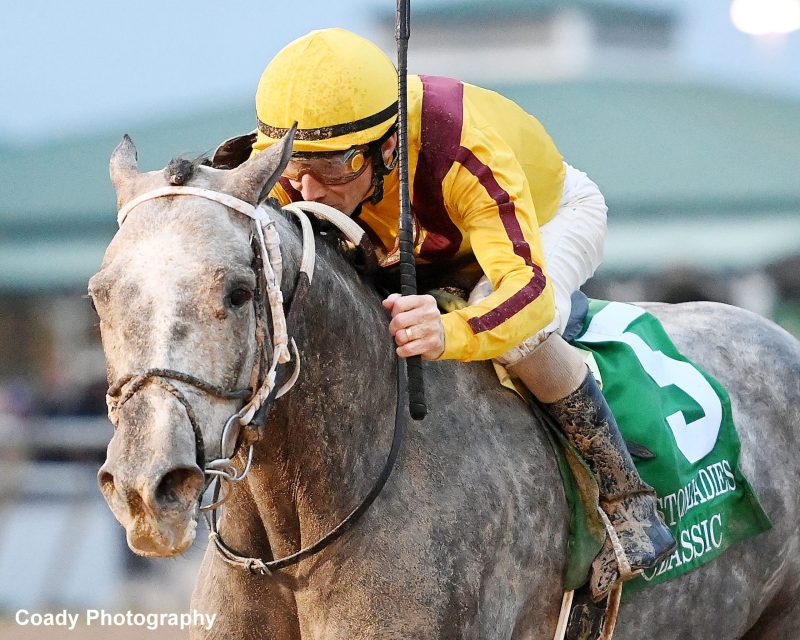