Until two weeks ago, The Hundred Acre Field's Cracker Factory hadn't won a race on the NSA circuit — though he competed against some tough foes — in a dozen tries over three seasons following a successful career overseas.

Two weeks ago he broke his maiden over timber at Shawan Downs, and on Saturday he became a stakes winner, making a last-to-first move in the $30,000 National Sporting Library & Museum Cup.

Under Jamie Bargary, who piloted the seven-year-old son of Poet's Voice for the first time at Shawan for trainer Mark Beecher, Cracker Factory unleashed a belated rally heading downhill in the 3 1/4-mile race the final time, but still had plenty of ground to make up. Entering the stretch, he split his two rivals, Ballybristol Farm's Boutonniere and Sheila Williams and Northwoods Stable's Storm Team, to get up by a half length.

For Bargary, who has been on fire since August, it capped a memorable three-win day, as it did for trainer Beecher, himself a heralded timber jockey before becoming a conditioner, who also tripled.

RS One makes his debut a winning one

Making his first career start, Straylight Racing's RS One, a German-bred son of Malinas, came from off the pace in the opener, a $30,000 maiden hurdle, to win going away over late leaders Potus and Thai Terrier.

For the second time this season, Virginia horseman Sonny Via sent out Welshman to victory in his home state. After breaking his maiden at Foxfield in Charlottesville in the spring, the four-year-old son of Flintshire romped in a handicap for horses rated at 115 or less by eight lengths under Graham Watters for Hall of Fame trainer Jack Fisher.

Racing in sixth in the field of eight for most of the race, Welshman made a middle move on the backside on the second circuit, took over on the final turn, and drew off. Clarke Ohrstrom's Mr. Bridger, trained by Laird George and ridden by Tom Garner was second; R&K Racing's Molly Fantasy (Keri Brion/Parker Hendriks) was third.

Top Brass is all class in maiden starter hurdle

Making his first start outside of the UK, Ashwell Stable's Top Brass was always well placed in the field of nine before unleashing his bid over the final fence to score a hard-fought half-length win in the fourth, a $15,000 hurdle for maidens who had started in a race for a claiming tag of $20,000 or less.

Ridden by Tom Garner for leading trainer Leslie Young, the four-year-old British-bred son of Gleneagles had to dig down to prevail in a thrilling duel to the wire with Raising Hull Racing's Lowcountry, ridden by Richard Boucher for his wife, trainer Lilith Boucher. It was another length and a half back to the show horse, Riverdee Stable's Mission Brief, trained by Danielle Hodsdon, with Ross Geraghty in the saddle.

Trainer-rider Sean McDermott strikes again. The longtime National Steeplechase Association jockey continued to enjoy success as both a trainer and rider, capturing the second division of the $15,000 maiden starter for horses previously entered for a claiming tag of $20,000 or less, with South Branch Equine's homebred Robert's Luxury.

Breaking on top, the four-year-old Maryland-bred son of Shanghai Bobby set the pace throughout, and was actually headed on the far turn, about three furlongs from home, by Ann Jackson's Left Blank and Tom Garner. But Robert's Luxury dug in gamely and drew clear over the last fence to score by two and a quarter lengths to earn his first NSA victory. For McDermott it was his eighth score of the season as a conditioner.

Left Blank was second best, six and one half lengths ahead of Hey Teacher Partners' eponymous Hey Teacher, ridden by Barry Foley.

To say jockey Jamie Bargary is on one heck of a ride is the height of understatement. The Irish jockey, who joined the NSA circuit in May of 2021, had but one victory in 21 mounts this spring.

But since Aug. 15 at Colonial Downs, Bargary has amassed 12 victories (11 over fences, and one in the flat race at Colonial Downs) in 26 starts, punctuated by his huge upset of The Mean Queen with Bruton Street-US' Proven Innocent in the William Entenmann novice stakes at Aqueduct last month.

With three wins on the card at Virginia Fall on Saturday, Bargary now has a dozen on the year, putting him in a tie for second with Tom Garner and Freddy Procter, and seven behind leader Parker Hendriks.

In the sixth race at Middleburg, Bargary piloted Irv Naylor's Stooshie, trained by Cyril Murphy, to victory in the $15,000 timber maiden at 3 miles, giving the Irish-bred his first NSA tally.

Stooshie, who was reserved early, made his move on the third and final circuit of Glenwood Park, digging in to hold off Riverdee Stable's Lonely Weekend, trained by Todd Wyatt and ridden by Sean McDermott. Stooshie's margin of victory was a half length. Leipers Fork Steeplechasers' Court Ruler was third for trainer Leslie Young and jockey Tom Garner.

Stooshie has had a star-crossed career since coming over from the UK in the spring of 2019. In 10 starts, he has four DNFs. But he also has hit the board in every other start, with three seconds and two thirds to go along with Saturday's win.

Making his first start in more than 16 months, the French-bred and raced seven-year-old shadowed Silverton Hill's Bodes Well, a stakes winner over hurdles and in steeplethon events for trainer Leslie Young and jockey Tom Garner.

Duc de Meran made his bid over the final brush fence and surged late to collar his foe by a half length. Petticoats Loose Farm's Gaye Breeze, trained and ridden by Sean McDermott, was fourteen lengths back in third.

This is not the first time Duc de Meran has engineered an upset of a formidable foe in steeplethon competition. At the Virginia Gold Cup Races in May 2021, he defeated Straylight Racing's mighty Invocation, who captured four and finished second in three of the challenging steeplethon races at Glenwood Park and Great Meadow.

The four-year-old Irish-bred son of the magnificent Frankel got a chance to stretch his legs on the NSA circuit with an exciting win in the finale, a training flat contest at 1 1/4 miles.

Owned by Ed Swyer's Hudson River Farms, trained by Keri Brion, and ridden by leading jockey Parker Hendriks, Modus Operandi took aim at the leader, Ashwell Stable's Lumberjack, turning into the stretch, and fought his way to a three-quarter-length score.

Sean McDermott rode the runnerup for trainer Leslie Young. Lumberjack's stablemate, He Be Da Bomb, also trained by Young and ridden by Gerard Galligan, was third.

Modus Operandi began his career in France, then made seven starts in the U.S., at Santa Anita, Churchill Downs, Keeneland, Turfway Park, Gulfstream Park, and Hawthorne.

And at Genesee Valley

Andi'amu resumes his winning ways with romp in Hunt Cup

Racing returned to Geneseo in upstate New York on Saturday with a three-race timber card, anchored by the $25,000 Genesee Valley Hunt Cup timber stakes at 3 1/2 miles over 19 fences.

For the first mile of the Hunt Cup, which drew four starters, Ballybristol Farm's 2019 National Steeplechase Association timber champion Andi'amu swapped the lead with Kinross Farm's Pocket Talk, who maintained an advantage until fence 14, when jockey Freddy Procter, aboard the champ, stepped on the gas.

From there, Andi'amu, trained by Leslie Young, dictated the pace, drawing clear rounding the far turn and leading by eight lengths entering the stretch. Procter won as he pleased as Andi'amu was never threatened and scooted clear by nearly thirteen lengths.

Upland Farm's Shootist, trained by Todd McKenna and ridden by Teddy Davies, was far back until getting into gear with about three-quarters-of-a mile to go, hooking up with Pocket Talk, ridden by Theresa Dimpfel for trainer Joe Davies. As the duo battled, Pocket Talk appeared to be poised to finish second, but stumbled at the final jump, unseating his rider. That cleared the way for Shootist to grab the place position by about thirteen lengths over Armata Stable's Goodoldtimes, ridden by Colin Smith for trainer Alicia Murphy.

The victory by Andi'amu was the third stakes triumph in 2022 for the 12-year-old. Earlier, he captured the Virginia Gold Cup and Willowdale Steeplechase. He began the fall season with a second to Storm Team in the Brown Advisory timber stakes at Shawan Downs last month. It was Andi'amu's 13th lifetime victory and raised his bankroll to $457,000.

For most of the going, Kinross Farm's Great Road, with Teddy Davies aboard, controlled the pace, fending off challenges by his two foes, sometimes leading by a little, others scampering off by eight or so lengths.

At fence 14, Hankin asked Notjudginjustsayin for more, and his mount responded. When Great Road stumbled slightly at the 15th fence, the race was essentially over. Notjudginjustsayin moved to the outside at the top of the stretch, opened up by three lengths and won by four.

Adjutant, who also benefited by Great Road's momentum-losing stumble, accelerated past him to finish second by three and one half lengths.

A “Master” of his domain

A field of four was entered for the $10,000 allowance race for amateur or apprentice riders at 3 miles, but only two finished after Ballybristol Farm's Mercoeur went off course and Sally Reed's It's Nothing was pulled up.

But before that, Mercoeur, ridden by Freddie Procter, took the lead and maintained his advantage until the final half mile. That's when South Branch Equine's Master Seville, under Brett Owings, made his move, assumed the lead, and held off a late charge by Irv Naylor's Withoutmoreado, ridden by Teddy Davies for trainer Kathy Neilson. Master Seville's margin of victory was one and three-quarter lengths.

Master Seville has had a solid year for trainer Mark Beecher, breaking his maiden at Cheshire, followed by a second and third in allowance competition before Saturday's victory. 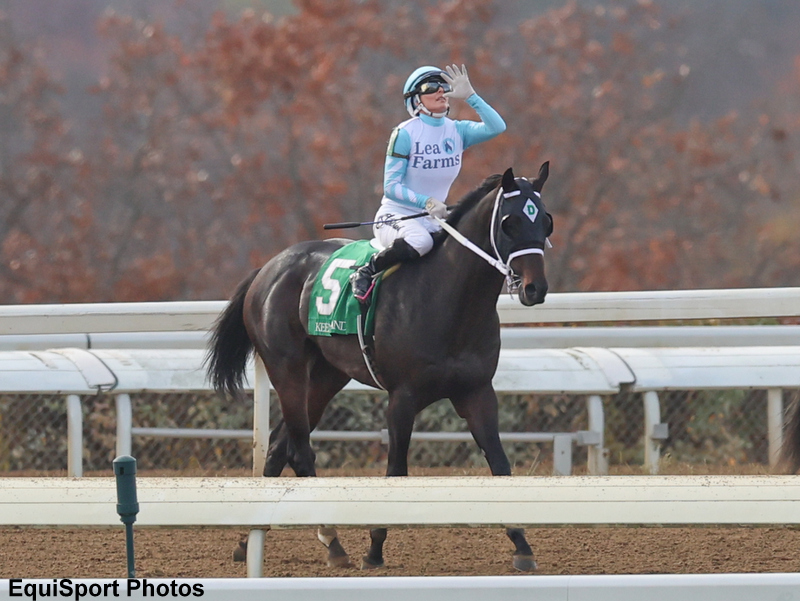