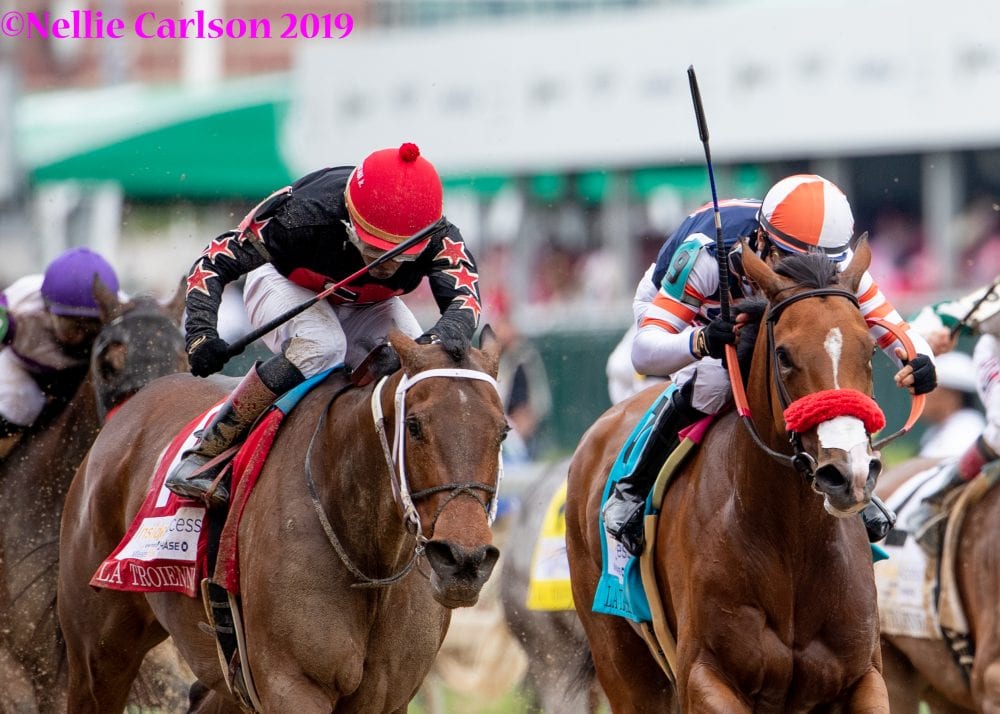 She’s A Julie, left, rallies down the lane to win the La Troienne

Bradley Thoroughbreds, Whispering Oaks Farm, Team Hanley, Madaket Stables, and Tim and Anna Cambron's She's A Julie had her work cut out for her in the stretch of Friday's Grade 1 La Troienne, but was able to run down the erratically-moving Secret Spice to win by about a half-length on the wire. Ridden by Ricardo Santana for trainer Steve Asmussen and sent off at 5-1 odds, the 4-year-old daughter of Elusive Quality covered 1 1/16 miles on Churchill Downs' fast main track in 1:43.58.

“I felt this would be the right spot for her,” Asmussen said. “I got extremely nervous with all the rain this morning, with a sloppy track. It seemed like her sloppy track run last season caused the dip. But she's a Grade I-winning mare and deservedly so. I got concerned going into the second turn, it seemed that she had to wait for traffic a bit. But she showed her heart. She's a monster physically, and it just shows that time helped her come together.”

She's A Julie broke sharply from her inside post position, but allowed Santana to take her back behind rivals when Awe Emma demanded the lead in the clubhouse turn. Secret Spice went with that rival to press the pace, and Divine Miss Grey moved up to keep company with She's A Julie down the backstretch.

Awe Emma set fractions of :24.01 and :47.92 while Secret Spice was just a length behind and in the clear, but Santana was perfectly patient aboard She's A Julie on the rail. Rounding the far turn, Secret Spice took the lead and pulled away by a couple lengths turning toward the finish.

She's A Julie angled off the rail for the stretch drive and made steady progress all the way down the lane, despite Secret Spice wandering over the course and several times nearly impeding her rival's path. She's A Julie remained steadfast and put in her best effort in the final sixteenth to hit the wire a winner by about half a length. Secret Spice finished second, while Blue Prize rallied for the show. Mopotism came from well back to finish fourth.

“I had plenty of horse at the three-eighths,” said Santana. “I had a little patience for a hole to open. A hole opened really well and when I asked her she gave me a really nice run. We felt like there was plenty of speed today. I told (trainer) Steve (Asmussen), 'I want to stay behind the speed.' Steve said, 'You know the filly really well. Do what you can.' I put her behind horses and she relaxed really well. When she picked up the bridle at the three-eighths, she started running.”

Bred in Kentucky by Godolphin, She's A Julie is out of the winning Dubai Millennium mare Kydd Gloves. The filly commanded a final bid of $160,000 at the Keeneland September sale, and won at first asking as a 2-year-old at Churchill in May of 2017. She did not win again for over a year, but put together a respectable sophomore season with wins in the G3 Iowa Oaks and G2 Remington Park Oaks, as well as a second-place finish in the G1 Alabama behind Eskimo Kisses (beating Midnight Bisou). Overall, She's A Julie has won six of her 13 starts for earnings of over $850,000.