But the daughter of Into Mischief showed that she may be able to rise to the levels of her famous sibling after she posted a brilliant debut in Race 6 on Sunday at Saratoga Race Course for Hall of Fame trainer Todd Pletcher.

“She's all Into Mischief when you look at her,” said Pletcher. “She looks like her stallion and she's been a consummate pro since Day One.”

Prank, who emerged from post 6 with Irad Ortiz, Jr. in the irons, was hurried to the front to dictate the pace and was briefly held to a half-length lead by High Class at the half-mile call. She quickly shook off her rival and widened her margins at each point of call, pulling away easily with a few shakes of the reins and one right-handed tap of the crop.

Ortiz, Jr. peeked back just before the sixteenth pole and eased up on the filly to coast under the wire 9 3/4 lengths the best, completing the 5 1/2-furlong maiden special weight in 1:03.94.

Pletcher said he was expecting Prank to give a strong performance after showing her maturity in a series of workouts that included a five-furlong breeze over the main track in 1:01.66 on July 11.

“I always try to underplay it, but I'll put it this way – it did not surprise me,” said Pletcher. “She caught onto everything first time and learned quickly. She's done everything right.”

Pletcher added that Prank could potentially make her next appearance in the seven-furlong Grade 1, $300,000 Spinaway on September 4 at the Spa.

Ortiz, Jr., who worked the filly once from the gate prior to her debut, said he was also expecting a good effort from her.

“She did it very nicely. She's a nice filly,” Ortiz, Jr. said. “I worked her in the morning from the gate and she was very nice. She gave me a good feeling – she broke sharp, I took ahold of her and never let her run and she went in 48 or 47 [seconds], so I was excited. I wanted to see what she would give me, and obviously she was nice.”

Out of the Pulpit mare Callingmissbrown, Prank was a $500,000 purchase from the Ashview Farm consignment at last year's Keeneland September Yearling Sale. She was bred in Kentucky by Ashview Farm and Colts Neck Stable. 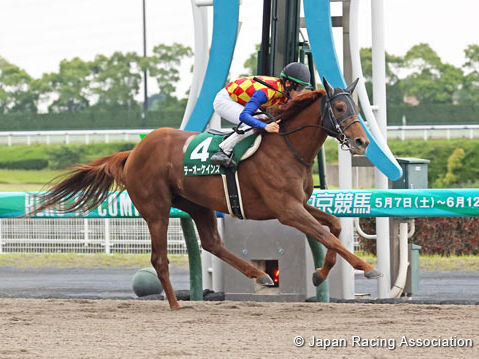