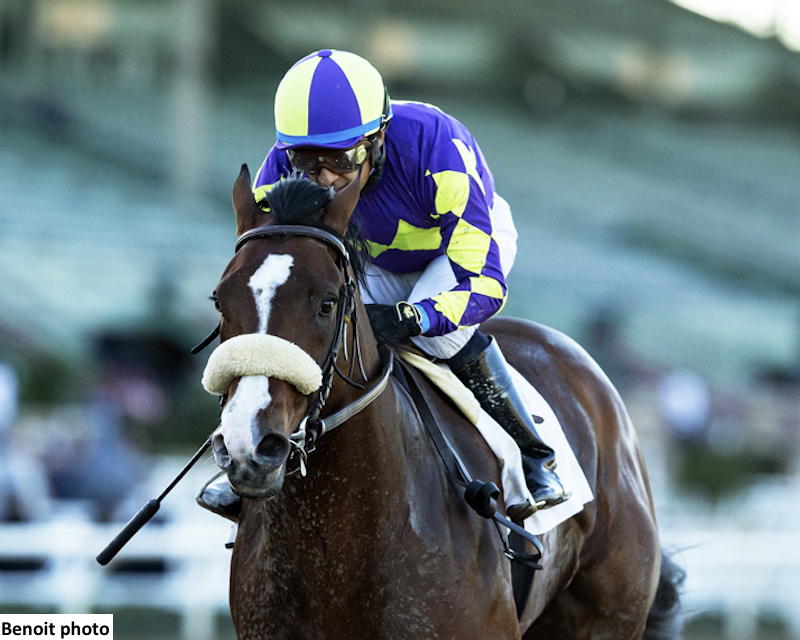 Victor Espinoza aboard Express Train in the San Pasqual

It's full steam ahead for C R K Stable's Express Train as he ran perhaps the best race of his career in winning the Grade 2, $200,000 San Pasqual Stakes for the second year in a row and stamped himself a primary contender for the Grade 1, $650,000 Santa Anita Handicap on March 5 at Santa Anita in Arcadia, Calif.  Trained by John Shirreffs and ridden by Victor Espinoza, Express Train, who was in the thick of a hot early pace duel, powered to a 3 ¼-length victory while covering 1 1/8 miles in 1:50.99.

John Velazquez, aboard Eight Rings, stepped on the gas three furlongs out, but Express Train was just three quarters of a length back and he enjoyed a one length edge at the quarter pole.  At that point, Law Professor loomed ominously turning for home, but Express Train was able to shrug off the challenge approaching the furlong marker in a huge effort.

“It got a little complicated out of the gate because I thought the two horses outside of me were going to go and make the pace,” said Espinoza.  “Then the one (longshot Kiss Today Goodbye) decided to take back…So that kind of made my decision to go forward and stay there rather than be stuck on the inside.  It's all about the horses too.  Express Train, he helped me to move with such confidence at that point that I was not afraid to just let him go.

“I think the last time (a nose victory in the Grade 2 San Antonio Stakes Dec. 26), he won but he was not 100 percent, because he had a little time off in between that race.  But now, he's ready to go.  I had the opportunity to come and work him a couple times…Coming into this race I was confident but in the race, anything can happen.  Things got a little complicated, but we resolved them quick.”

“I think this was a little bit more difficult for him,” said Shirreffs, when asked to compare Express Train's win today with his triumph in the 2021 San Pasqual.  “There was lot going on early with the fast pace…Nobody got to relax because Mike's horse (Smith, aboard American Theorem) came up on the outside and wanted to force the pace so it was do or die time then.  We're looking forward to the Big 'Cap.”

Trained by Michael McCarthy and ridden by Juan Hernandez, Law Professor, who came into the race off a big win in the Grade 2 Santa Anita Mathis Mile Dec. 26, looked as though he'd give the winner all he wanted, but couldn't go with him the final three sixteenths of a mile.  Off at 4-1, he paid $4.20 and $2.60 while finishing 2 ½ lengths in front of early leader Eight Rings.

Ridden by John Velazquez, Eight Rings, the 2-1 favorite, paid $2.40 to show while finishing three quarters of a length in front of stablemate Spielberg.